Another Record-Setting Month For Canadian Housing

Today’s release of August housing data by the Canadian Real Estate Association (CREA) showed a blockbuster August with both sales and new listings hitting their highest levels in 40 years of data–exceeding the record July activity levels. This continues the rebound in housing that began four months ago.

National home sales rose a further 6.2% on a month-over-month (m-o-m) basis in August, raising them to another new all-time monthly record (see chart below).

Unlike the previous two months in which activity was up right across the country, sales in August were up in about 60% of local markets. Gains were led by the Greater Toronto Area (GTA) and British Columbia’s Lower Mainland. With ongoing supply shortages in so many parts of Canada, it is interesting to note that the GTA and Lower Mainland also saw a considerable amount of new supply become available in August.

Actual (not seasonally adjusted) sales activity posted a 33.5% y-o-y gain in August. It was a new record for the month of August, and the sixth-highest monthly sales figure of any month on record. Transactions were up compared to last August in almost all Canadian housing markets.

So far this year, over 340,000 homes have traded hands over the Canadian MLS Systems, which was up 0.8% from the same period in 2019 despite the COVID-19 pandemic-induced recession.

“It has been a record-setting summer in many housing markets across Canada as REALTORS® and their clients play catch up following the loss of so much of the 2020 spring market,” stated Costa Poulopoulos, Chair of CREA. “Many markets dealing with inventory shortages have been seeing fierce competition among buyers this summer; although, that was something that had been anticipated for 2020 prior to COVID-19. It really does seem that the spring market shifted into the summer”. 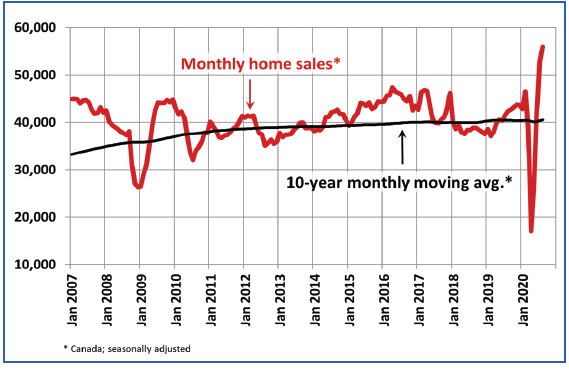 The number of newly listed homes posted a further 10.6% gain in August compared to July. New supply was up in close to three-quarters of local markets, led by gains in the Lower Mainland, GTA and Ottawa.

With the August increase in new supply outpacing the rise in sales for the first time since the rebound began in May, the national sales-to-new listings ratio eased to 69.4% in August compared to 72.3% posted in July. That said, it was still among the highest levels on record for this measure.

Based on a comparison of sales-to-new listings ratio with long-term averages, only about a third of all local markets were in balanced market territory, measured as being within one standard deviation of their long-term average. The other two-thirds of markets were above long-term norms, in many cases well above.

The number of months of inventory is another important measure of the balance between sales and the supply of listings. It represents how long it would take to liquidate current inventories at the current rate of sales activity.

There were just 2.6 months of inventory on a national basis at the end of August 2020 – the lowest reading on record for this measure. At the local market level, a number of Ontario markets are now into weeks of inventory rather than months. So supply constraints are still prevalent in many parts of the country, especially in Ontario.

The Aggregate Composite MLS® Home Price Index (MLS® HPI) rose by 1.7% m-o-m in August 2020 (see chart and table below). This compares to a 2.3% m-o-m jump in July 2020 – the second largest increase on record (after March 2017) going back 15 years. Of the 21 markets currently tracked by the index, m-o-m gains were posted everywhere but Victoria and elsewhere on Vancouver Island.

The non-seasonally adjusted Aggregate Composite MLS® HPI was up 9.4% on a y-o-y basis in August – the biggest gain since late 2017.

The largest y-o-y gains were recorded in Ottawa (+19.9%) and Montreal (+16.4%), followed by increases in the 10% – 15% range in the GTA and surrounding Greater Golden Horseshoe markets. Moncton prices were also up in that range in August.

The MLS® HPI provides the best way to gauge price trends because averages are strongly distorted by changes in the mix of sales activity from one month to the next.

The actual (not seasonally adjusted) national average home price set another record in August 2020 at more than $586,000, up 18.5% from the same month last year. 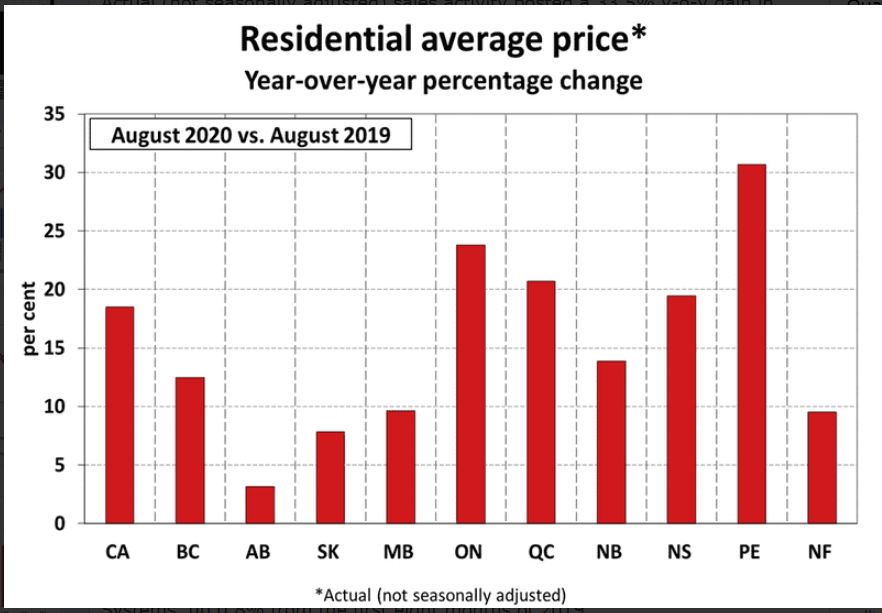 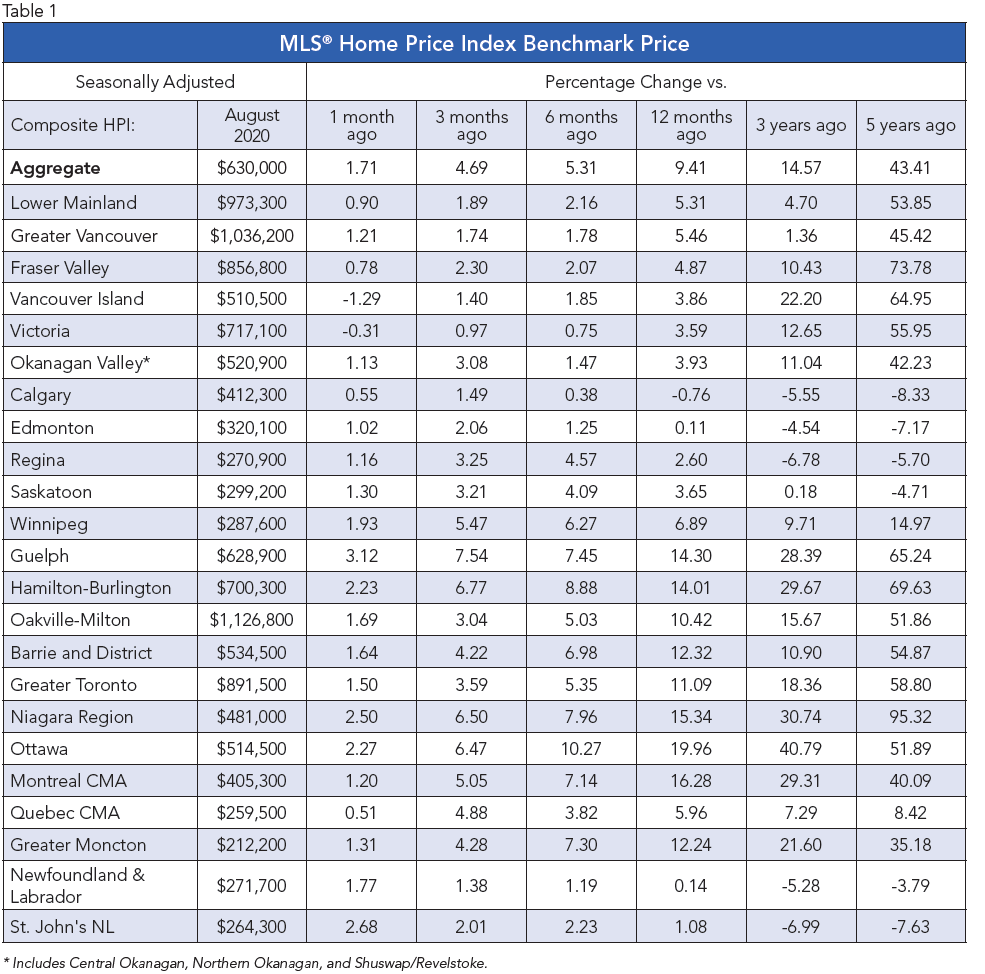 Housing strength is largely attributable to pent-up demand by households that have maintained their level of income during the pandemic. The hardest-hit households are low-wage earners in the accommodation, food services, and travel sectors. These are the folks that can least afford it and typically are not homeowners.

The good news is that the housing market is contributing to the recovery in economic activity.

The Residential Mortgage Industry report provides an in-depth view of the residential mortgage market in Canada: from mortgage origination to funding, covering insured and uninsured mortgages, and encompasses activity from all mortgage lender types. It is based on data available at the end of the second quarter of 2020. The following are key highlights: 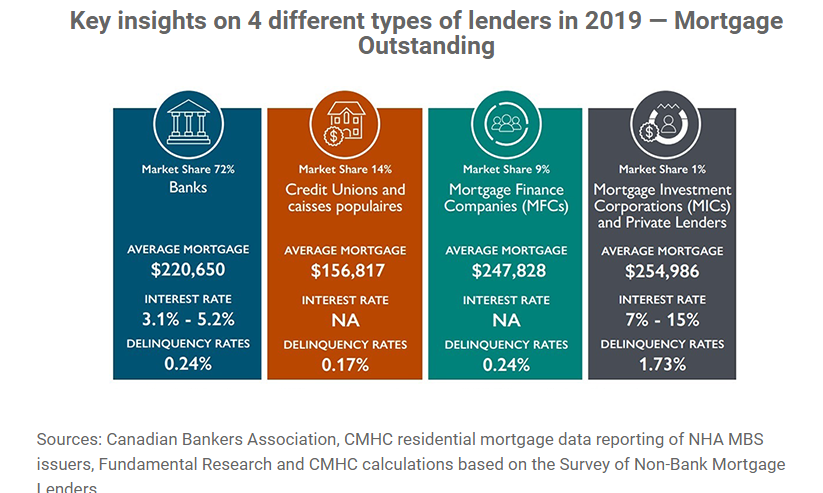