The Bank of Canada left the benchmark overnight policy rate unchanged at 0.25% and maintained its current pace of GoC bond purchases at its current pace. The Governing Council renewed its pledge to refrain from raising rates until the damage from the pandemic is fully repaired. The $3 billion weekly pace of bond-buying–known as quantitative easing–will decline as the recovery proceeds. In April, at their last meeting, the Bank reduced the pace of GoC bond buying from $4 billion to $3 billion per week. The central bank was among the first from advanced economies to shift to a less expansionary policy in April when it accelerated the timetable for a possible interest-rate increase and pared back its bond purchases.

The Bank’s view regarding the domestic economy appears to be little changed despite the April Monetary Policy Report (MPR) overestimating Q1 GDP growth by 1.4 percentage points. Indeed, today’s Policy Statement notes that Q1 GDP growth was “a robust 5.6 percent” and that the details of the report point to “rising confidence and resilient demand.” Concerning Q2, the third wave lockdowns are “dampening economic activity…largely as anticipated.” Note that the April MPR projected 3.5% growth in Q2 GDP, while the consensus forecast currently sits at 0% for Q2, with downside risk.

The Bank also noted that “Recent jobs data show that workers in contact-sensitive sectors have once again been most affected. The employment rate remains well below its pre-pandemic level, with low-wage workers, youth and women continuing to bear the brunt of job losses.” The chart below shows that the labour market is still below the Bank’s target for a full recovery. 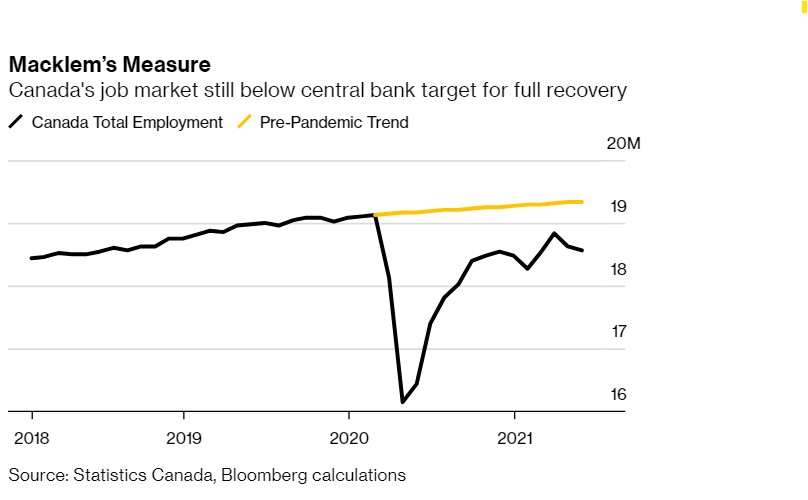 Bank of Canada Upbeat Over the Medium Term

“With vaccinations proceeding at a faster pace, and provincial containment restrictions on an easing path over the summer, the Canadian economy is expected to rebound strongly, led by consumer spending. Housing market activity is expected to moderate but remain elevated.”

On the inflation front, there were no surprises. The Statement says that inflation has risen to the top of the 1-3% control range due to base effects and gasoline prices. The rise in the core measures is blamed on temporary factors as well. The Bank anticipates headline inflation will stay around 3% through the summer before pulling back later in the year. On the cautious side, the BoC highlights that the labour market still has a way to go before healing. There’s also uncertainty surrounding COVID variants.

The concluding paragraph didn’t change much. It reiterates that there “remains considerable excess capacity” and that policy rates will stay at the lower bound until “economic slack is absorbed,” which the April MPR said was in 2022H2. Concerning further tapering, the “assessment of the strength and durability of the recovery” will guide that decision.

The C$ barely garnered a mention yet again, with the Statement noting the recent gains and accompanying rise in commodity prices. The market might view the lack of concern here as a green light for further strength. 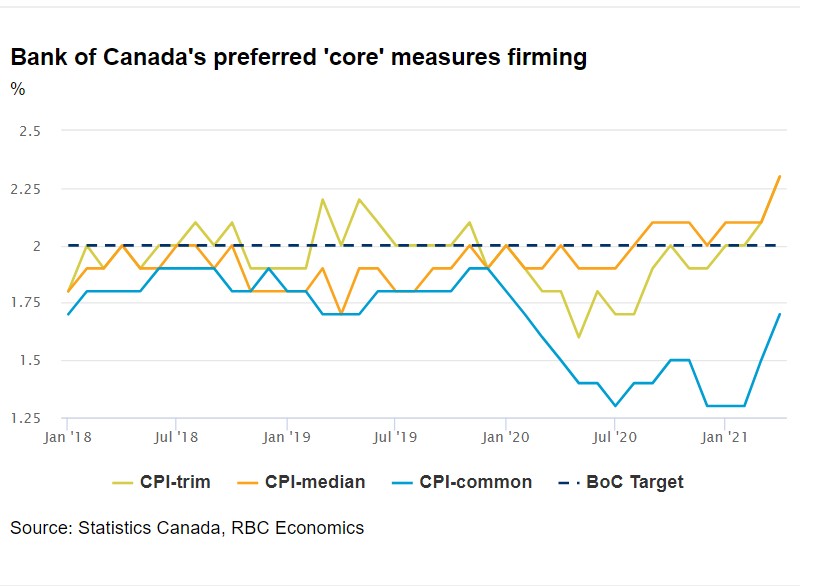 The Bank of Canada is looking through “transitory” ups in inflation and downs in GDP. With vaccination rates continuing to ramp up significantly, and provinces beginning a gradual reopening process, the economy will rebound substantially beginning in June.

Indeed, with the near-term growth outlook increasingly bright, concerns have shifted to rising production input prices and the prospect for a sharp recovery in consumer demand to stoke inflation pressures. For now, the BoC is positing that near-term increases in consumer price growth rates will prove ‘transitory.’ But there have also been signs of harder-to-dismiss firming in most measures of underlying price growth gauges, including the BoC’s own preferred core measures edging up towards or above the 2% inflation target.

July’s meeting will likely be a bit more interesting with the Bank issuing more details in another Monetary Policy Report. We don’t see any need for dramatic forecast revisions at this stage, and the BoC’s guidance that rates might have to start increasing in the second half of next year remains appropriate. It looks like the main question will be around further tapering of the BoC’s asset purchases. The BoC didn’t signal an imminent taper (we didn’t think it would) but said decisions regarding the pace of purchases would be guided by its assessment of the strength and durability of the recovery. If incoming data aligns with the BoC’s forecasts, we could see it reduce weekly bond-buying again in July to $2 billion per week from $3 billion. If not, September might serve as a backup as the bank seeks to prevent its footprint in the bond market (nearly 44% at the end of May) from becoming too large while at the same time setting itself up to shift QE to reinvestment only well in advance of the first interest rate hike.