Much has changed since the Bank of Canada’s last decision on January 20. While the second pandemic wave was raging, new lockdowns were implemented in late 2020, and there were fears that the economy, in consequence, was likely to grow at a 4.8% annual rate in Q4 and contract in Q1. Instead, the lockdowns were less disruptive than feared, as Q4 growth came in at a surprisingly strong 9.6% annual rate–double the pace expected by the Bank.

Rather than a contraction in  Q1 this year, Statistics Canada’s flash estimate for January growth was 0.5% (not annualized). Strength in January came from housing, resources and government spending, and the mild weather likely helped. In today’s decision statement, the central bank acknowledged that “the economy is proving to be more resilient than anticipated to the second wave of the virus and the associated containment measures.”  The BoC now expects the economy to grow in the first quarter. “Consumers and businesses are adapting to containment measures, and housing market activity has been much stronger than expected. Improving foreign demand and higher commodity prices have also brightened the prospects for exports and business investment.”

A massive $1.9 trillion stimulus plan in the US is also about to turbocharge Canada’s largest trading partner’s economy, which will be a huge boon to the global economy and explains why commodity prices and bond yields have risen substantially in recent months. The Canadian dollar has been relatively stable against the US dollar but has appreciated against most other currencies.

Economists now expect Canada to expand at a 5.5% pace this year versus a 4% projection by the Bank of Canada in January. Going into today’s meeting, no one expected the Bank to raise the overnight policy rate, but markets were pricing in more than a 50% chance of an increase by this time next year, up from about 25% odds in January.

On the other hand, the BoC continued to emphasize the risks to the outlook and the huge degree of slack in the economy. “The labour market is a long way from recovery, with employment still well below pre-COVID levels. Low-wage workers, young people and women have borne the brunt of the job losses. The spread of more transmissible variants of the virus poses the largest downside risk to activity, as localized outbreaks and restrictions could restrain growth and add choppiness to the recovery.”

The Bank also attributed the recent rise in inflation was due to temporary factors. One year ago, many prices fell with the onslaught of the pandemic, so that year-over-year comparisons will rise for a while because of these base-year effects combined with higher gasoline prices pushed up by the recent run-up in oil prices. The Governing Council expects CPI inflation to moderate as these effects dissipate and excess capacity continues to exert downward pressure. 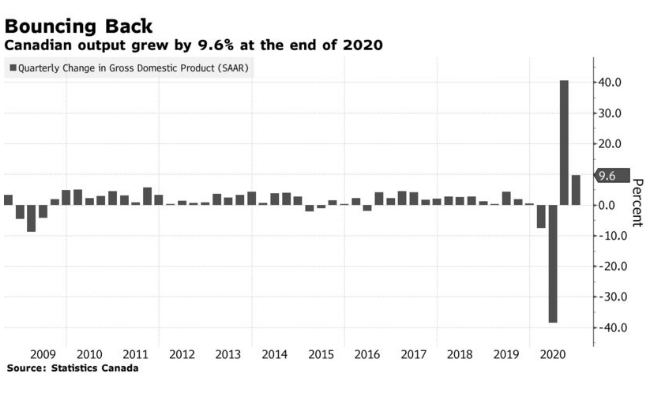 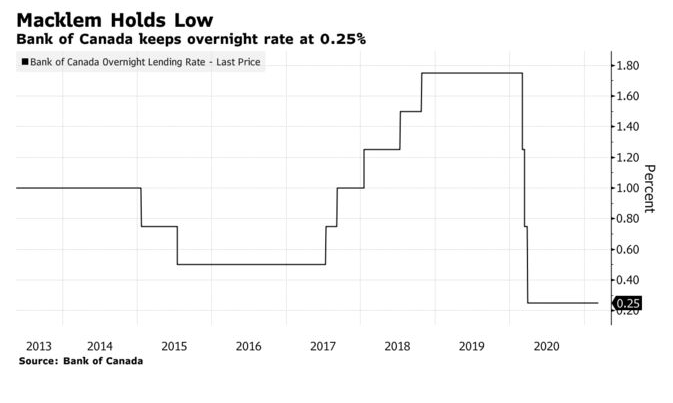 According to the policy statement, “While economic prospects have improved, the Governing Council judges that the recovery continues to require extraordinary monetary policy support. We remain committed to holding the policy interest rate at the effective lower bound until economic slack is absorbed so that the 2% inflation target is sustainably achieved. In the Bank’s January projection, this does not happen until 2023.” The Bank will continue its QE program to reinforce this commitment and keep interest rates low across the yield curve until the recovery is well underway. As the Governing Council continues to gain confidence in the recovery’s strength, the pace of net purchases of Government of Canada bonds will be adjusted as required. The central bank will “continue to provide the appropriate monetary policy stimulus to support the recovery and achieve the inflation objective.” 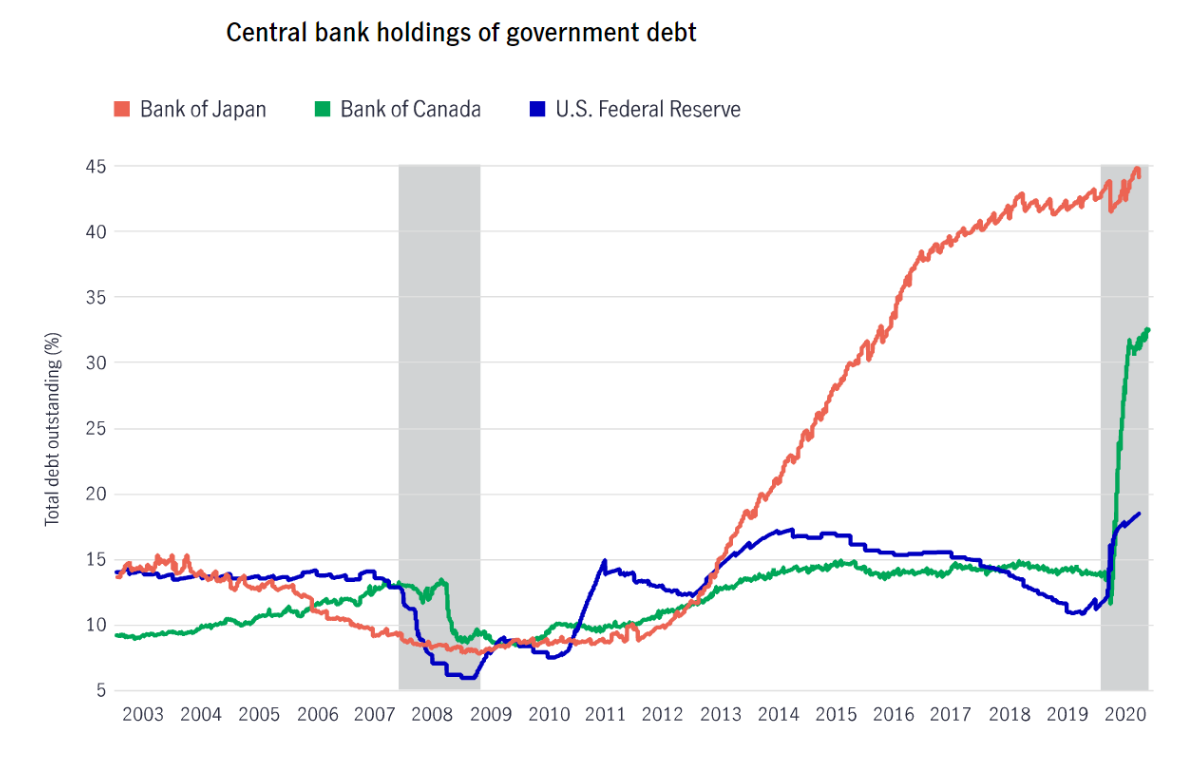 The Bank gave no indication when it might start to taper its bond-buying. The next decision date is on April 21, when a full economic forecast will be released in the April Monetary Policy Report. Governor Macklem is more dovish than many had expected and will err on the side of caution. When the central bank starts tapering its asset purchases, it will be the equivalent of easing off the accelerator rather than applying the brakes. The Bank of Canada has been buying a minimum of $4 billion in federal government bonds each week to help keep borrowing costs low. That pace may no longer be warranted with an outlook that appears to show the economy absorbing all excess slack by next year, ahead of the Bank of Canada’s 2023 timeline for closing the so-called output gap.