Despite the good news on the vaccine front since the Governing Council’s last meeting in late October, the Bank of Canada reasserted its commitment to provide extraordinary monetary policy support for many months to come. The statement released today reiterated that the Bank will hold the policy interest rate at its effective lower bound of 0.25% “until economic slack is absorbed so that the 2% inflation target is sustainably achieved.”  Although inflation in October picked up, it was mainly because of higher prices for fresh fruits and vegetables. The Bank’s policy statement said that measures of core inflation are all below 2%, and “considerable economic slack is expected to continue to weigh on inflation for some time.”  The economy will continue to require this stimulus until 2023–as stated in the most recent (October) Monetary Policy Report (MPR).

The central bank will reassess the outlook when it meets again on January 20 when it releases the next full update of its outlook for the economy and inflation, including risks to the projection, in the January MPR. 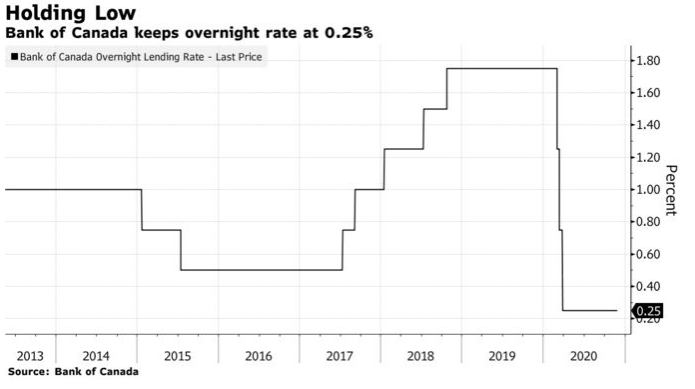 Despite the good news regarding the vaccine, other recent developments weigh heavily on the economy. Canada has been hard hit by the second wave in Covid cases (see chart below). The daily number of cases have averaged just over 6,000 in the past week. According to the Public Health Agency of Canada, Covid-19 cases are on pace to exceed 20,000 a day at the current rate of spread. Provinces all over the country have imposed aggressive new restrictions to slow the spread of the virus.

New lockdown measures are having a crippling effect on non-essential retailers and restaurants during the all-important holiday season. The government announced aggressive fiscal policy measures last week to cushion the blow on businesses and households. Indeed, among all the G7 countries, Canada’s fiscal response has been the most aggressive.

As well, according to Bloomberg News, Canada has reserved more vaccine doses per person than anywhere, as PM Trudeau has accelerated plans to start giving shots.  “The first Canadians will be vaccinated next week if we have approval from Health Canada this week,” Trudeau told reporters in Ottawa. “This will move us forward on our whole timeline of vaccine roll out and is a positive development in getting Canadians protected as soon as possible.”

The Canadian dollar has also risen to a two-year high of over 78 cents US, which the Bank says is in large measure a reflection of broadly based US dollar weakness. 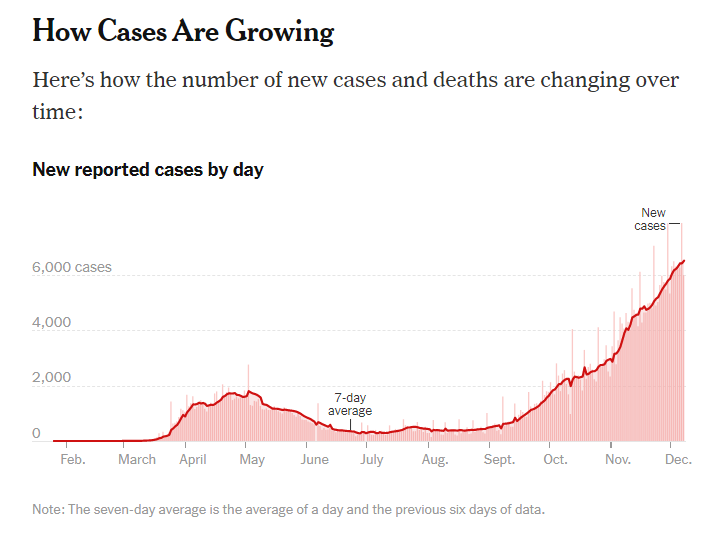 Another potential drag on the Canadian economy is the rise in market rates of interest triggered by the welcome news of a successful vaccine. The Bank of Canada is responding by purchasing at least $4 billion a week in longer-term Government of Canada bonds. For example, the GoC 5-year yield has risen from a low of 31 basis points in the past six months to a current level of just under 50 basis points. No doubt, quantitative easing has dampened the upward trend and will continue to do so.

If the Bank decides that additional monetary support is needed in January, it is more likely to come via a boost to GoC bond purchases than an adjustment in the overnight rate.

In his testimony before the House of Commons finance committee on Nov. 26, Governor Tiff Macklem acknowledged market distortions could occur once the bank’s share of government bond holdings grows beyond 50%. As shown in the chart below, the Bank currently holds about 34% of the market, and if buying continues apace,  CIBC economists estimate the Bank would own 48% by the end of 2021. 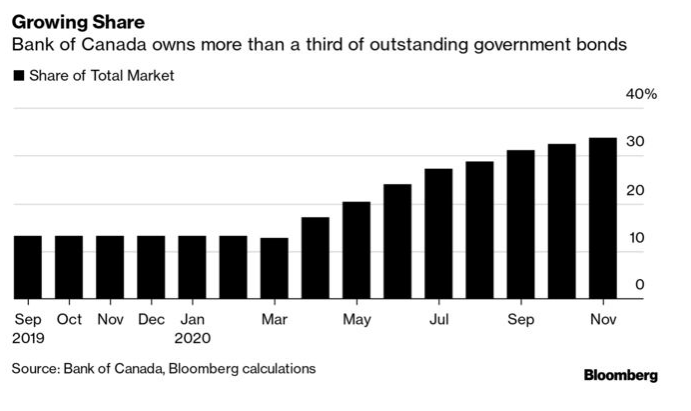 Bottom Line: Interest rates will remain low for the foreseeable future. The pandemic will largely determine the growth of the economy and the government’s response. Experts suggest that the second wave will last through the winter and that a widely dispersed vaccine will not be available until the second half of 2021.