Bank of Canada Still Expects No Rate Increases Until 2023

The Bank of Canada, this morning, released its January Monetary Policy Report (MPR), showing they expect to keep overnight interest rates at its “effective lower bound” of 0.25% until 2023 (see chart below). To reinforce this commitment and keep interest rates low across the yield curve, the Bank will continue its Quantitative Easing (QE) program–buying $4 billion of Government of Canada bonds every week until the recovery is well underway. The central bank indicated it could pare purchases once the recovery regains its footing.

According to the Bank’s press release, “The Governing Council will hold the policy interest rate at the effective lower bound until economic slack is absorbed so that the 2 percent inflation target is sustainably achieved. In our projection, this does not happen until into 2023.” Officials are apparently optimistic about the economy’s prospects once the vaccine is sufficiently distributed and injected. There is no indication that they are planning additional measures to ease monetary policy.

This is particularly noteworthy for two reasons: 1) some economists had been speculating that the Bank would lower the overnight rate by 10-to-15 basis points to help mitigate the impact of continued and broadening lockdowns; and, 2) others thought the early development of the vaccine would trigger sufficient growth to warrant a rate hike in 2022. In the Bank’s current view, neither is likely to be the case. Why mess with a minute cut in already record-low interest rates when mortgage lending is still strong? The slow rollout of the vaccine and the mounting second wave of cases assure weak economic activity in Canada at least until the second half of this year.

As well, inflation remains surprisingly muted. In a separate release today, Stats Canada revealed that price pressures in Canada unexpectedly slowed in December as the country endured a new wave of lockdowns. After climbing to the highest since the pandemic in November, the latest reading shows price pressures are still well below the Bank of Canada’s 2% target. That’s consistent with the view from policymakers that inflation will remain subdued for some time. 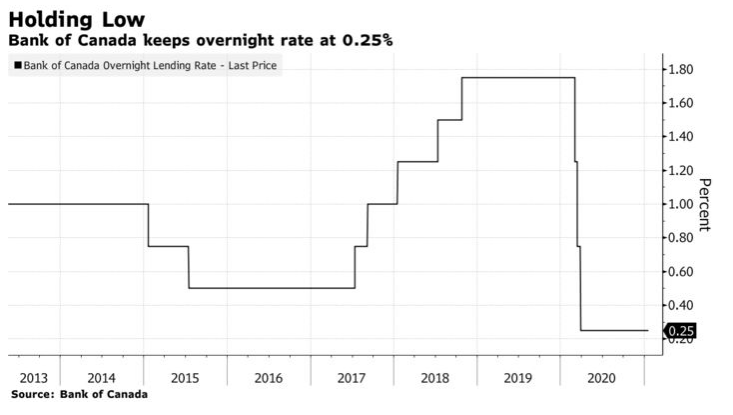 The pandemic’s second wave has hit Canada very hard, and the vaccine rollout has been disappointing (see chart below). Today’s MPR predicts that the economy will contract in the first quarter of this year. Economic weakness could be exacerbated by the Canadian dollar’s strength, which moved to above 79 cents US following today’s BoC announcement. Ten-year yields edged up modestly as well. 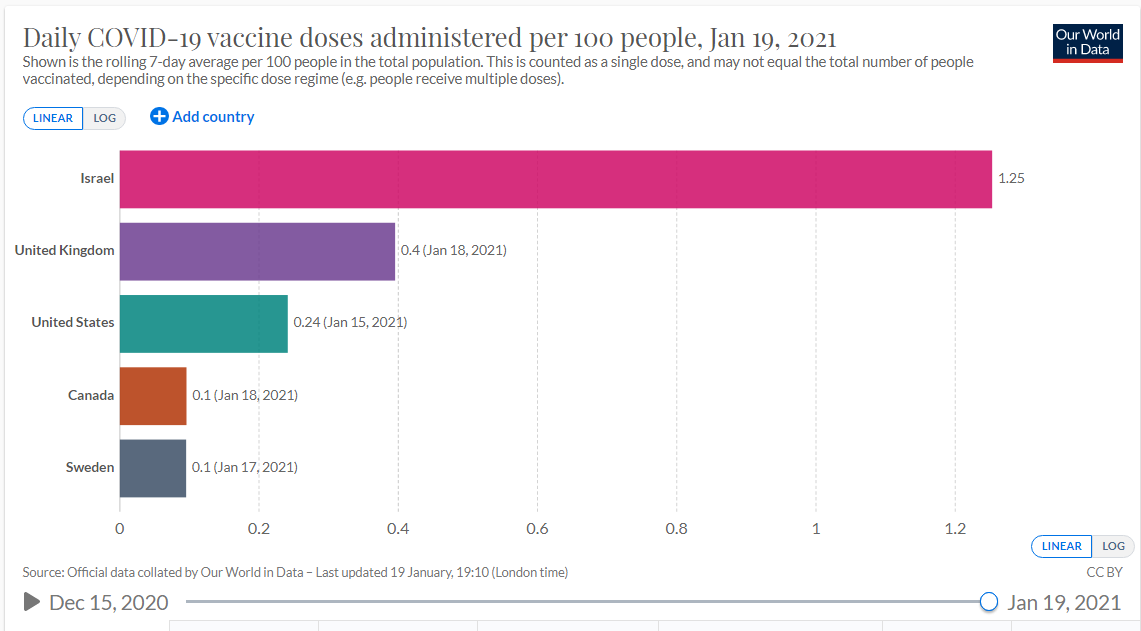 For the year as a whole, economic growth is expected to be around 4% in 2021, compared to a contraction of -5.5% last year. As the inoculated population grows, the Bank forecasts an acceleration in growth to just under 5% in 2022 and a more-normal 2.5% in 2023. According to the January MPR, “The medium-term outlook is stronger than in the October Report because of vaccines’ positive effects, greater fiscal stimulus, stronger foreign demand and higher commodity prices. Meanwhile, potential output has also been revised up, reflecting an improved projection for business investment and less scarring effects on businesses and workers. There is considerable uncertainty around the medium-term outlook for GDP and the path for potential output. Thus, while the output gap is expected to close in 2023, the timing is particularly uncertain.”

Concerning housing activity, the report said, “Demand for housing has continued to show resilience, despite increasing case numbers and tightening restrictions. Housing activity should remain elevated into the start of 2021, supported by low borrowing rates and resilient disposable incomes. Changes in homebuyers’ preferences have also played a role. For example, price growth has been strongest for single-family homes and in areas outside city centers,” shown in the chart below. 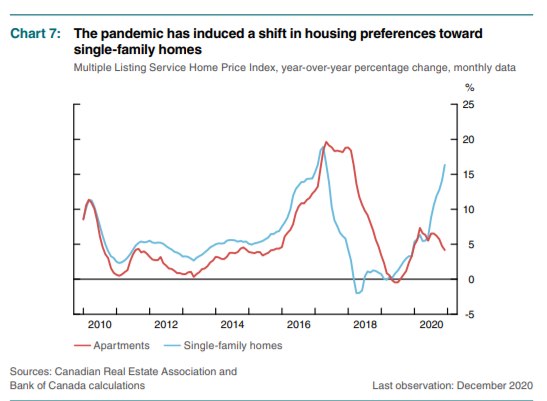