This morning’s Stats Canada release showed that the economy unexpectedly contracted in the second quarter by 1.1%, down from the revised 5.5% gain in the first three months of the year. The Canadian dollar dipped on the news to $.7921 as questions of resiliency in the face of the delta variant mount. Economists in a Bloomberg survey were anticipating a 2.5% expansion. Adding to the disappointment, economic growth fell a further 0.4% in July, according to a preliminary estimate.

The weak GDP data reduces the odds of the Bank of Canada tapering their bond purchases at their policy meeting on September 8th. It also highlights the output gap–the degree to which the economy remains below full economic capacity–remains a big issue. The Bank has forecast the gap to close by the middle of 2022. While that remains uncertain, we continue to expect growth to rebound in the third quarter.

Increases in investment in business inventories, government final consumption expenditures, business investment in machinery and equipment, and investment in new home construction and renovation were not sufficient to offset the declines in exports (-4.0%) and homeownership transfer costs (-17.7%), which include all costs associated with the transfer of a residential asset from one owner to another. 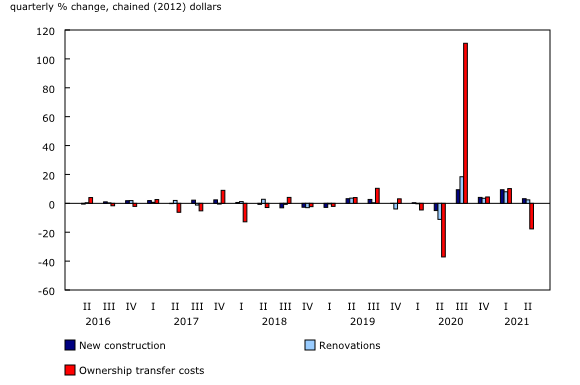 Both new construction and renovations—the components of residential capital stock—have shown sustained growth since the third quarter of 2020. Because of the ability to work from home, savings from less travel and reduced participation in other activities, low mortgage rates and increases in home equity lines of credit, spending has continued to increase on new houses (+3.2%) and home renovations (+2.4%).

Shortages of microchips and other inputs curtailed trade in motor vehicles and domestic consumption. Household purchases of new passenger cars (-7.2%) and trucks, vans and sport utility vehicles (-1.6%) decreased, while business investment in medium and heavy trucks, buses and other motor vehicles fell 34.2%. Longer plant shutdowns because of international supply chain disruptions have constrained imports of parts and led to significant decreases in exports. Low production of motor vehicles and parts resulted in an 18.9% drop in exports of passenger cars and light trucks and an 8.7% decline in tires, motor vehicle engines and parts exports. Inventories had another quarter of significant drawdowns in response to supply needs.

The modest rise in household spending (+0.7%, in nominal terms) was outpaced by growth in disposable income (+2.2%), leaving households with more net savings than in the previous quarter. Household incomes were primarily bolstered by employees’ rising compensation and increasing transfers received from the government, which were partially offset by a 2.8% rise in personal income taxes. 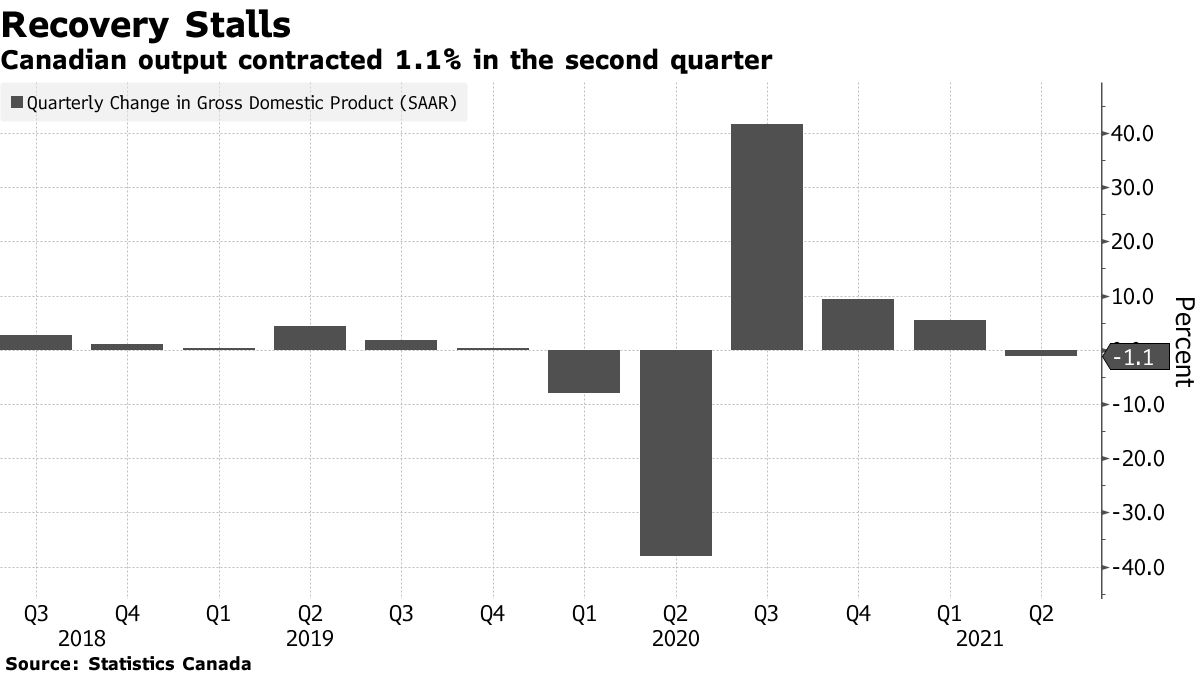 Today’s release is, in some respects, ‘ancient history.’ It is still widely expected that the economy will rebound in the third quarter. With the surge in household savings and continued growth in personal disposable income, pent-up demand is likely to boost consumption for the remainder of this year. All eyes will be on the August employment report released Friday, September 10th. The Bank of Canada will likely continue to proceed cautiously. Another tapering of the bond-buying program will come under scrutiny, and forward guidance will continue to suggest no rate hikes until the second half of next year.