StatsCanada today reported that consumer prices rose 5.7% year-over-year in February, up again from the prior month’s 5.1% rise. This was the largest gain since August 1991 (+6.0%).

This was no surprise, as the Ukraine War has stepped up inflation pressure worldwide. The US CPI rose a whopping 7.9% last month (see chart below).Price increases were broad-based in February, pinching the pocketbooks of Canadians. Consumers paid higher prices for gasoline and groceries in February 2022 compared with the same month a year earlier. Shelter costs continued to trend higher, rising at the fastest year-over-year pace since August 1983.

Excluding gasoline, the Consumer Price Index (CPI) rose 4.7% year over year in February, surpassing the gain in January (+4.3%) when the index increased at the fastest pace since its introduction in 1999.

Canadian motorists paid 32.3% more at the pump compared with February 2021.

Prices for food purchased from stores (+7.4%) rose faster in February than in January (+6.5%). This is the most significant yearly increase since May 2009. Higher input prices and heightened transportation costs continued to contribute to inflationary pressure in February.

Homeowners’ replacement cost (+13.2%), which is related to the price of new homes, and other owned accommodation expenses (+14.3%), which includes commissions on the sale of real estate, remained elevated year over year. In contrast, mortgage interest cost (-6.0%) moderated the shelter index on a year-over-year basis.

According to the Canadian Mortgage and Housing Corporation, improved economic and demographic conditions over the past year, including youth employment recovery and resumption of international migration to Canada, supported rental demand. This, in part, contributed to higher rent (+4.2%) prices year over year in February. 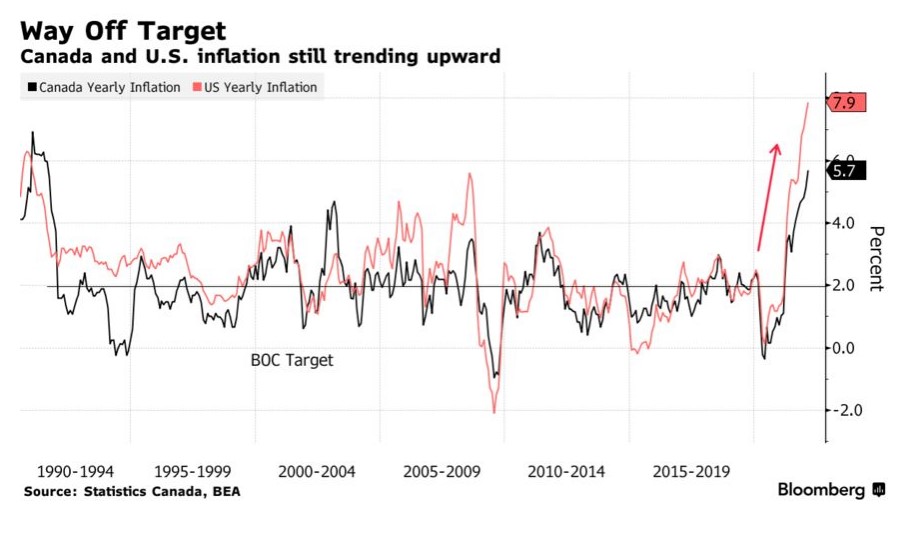 Inflation has exceeded the Bank of Canada’s 1%-to-3% target band for 11 consecutive months. Other central banks have already begun to hike overnight rates from their effective lower bound introduced in March 2020.

Today, the U.S. Federal Reserve hiked the overnight policy target for the first time since 2018 by 25 basis points and signalled that it expects to hike rates six times more this year.

The global geopolitical tensions and rising risk of a drawn-out conflict exacerbate inflation and supply bottlenecks, delaying a return to sub-3% inflation.