This morning, Statistics Canada released the January 2021 Labour Force Survey showing the negative economic impact of extended lockdowns in Ontario and Quebec. The closing of all in-person dining, nonessential retail, recreational facilities and personal care services in these provinces and Alberta and Manitoba took its toll on the labour markets.

Employment fell by 212,800 (-1.2%) in January, much weaker than generally expected. Losses were entirely in part-time work–full-time jobs actually rose 12,600–and were concentrated in the Quebec and Ontario retail trade sectors. As a result, hours worked somehow managed to rise 0.9% in the month.

The decline in January followed a revised 52,700 drop (-0.3%) in December and brought employment to its lowest level since August 2020.

Once again, job losses were heavily concentrated in retail and wholesale trade and hotels and restaurants. It is worth noting that 8 of the 16 industrial sectors saw job gains last month.

The unemployment rate rose 0.6 percentage points to 9.4%, the highest rate since August. That unemployment rate is now 3.7 ppts above the pre-COVID level, while the U.S. rate of 6.3% is 2.8 ppts higher over that period. This second consecutive monthly increase brought the unemployment rate to its highest level since August 2020. The number of long-term unemployed (people who have been looking for work or have been on temporary layoff for 27 weeks or more) remained at a record high (512,000)—a reminder that as unemployment has increased in recent months, many people affected by the initial COVID-19 economic shutdown have yet to return to work.

Still, Canada’s labour market is faring better now than it did during the first wave of restrictions in March and April when employment fell by 3 million.

By April 2020–one month into the pandemic–5.5 million workers had been directly affected by the initial widespread COVID-19 economic shutdown, which resulted in a drop in employment of 3.0 million and an increase in COVID-related absences from work of 2.5 million. In January, the equivalent number of affected workers was 1.4 million, including a decrease in employment of 858,000 and a COVID-related increase in absences of 529,000.

Once again, declines in employment occurred mostly among youth and women in the core working age of 25 to 54. These groups also recorded large decreases in part-time employment during the initial downturn in March and April 2020, reflecting that they are more likely to work part-time in industries directly affected by COVID-19 public health measures, including retail trade, and accommodation and food services.

Some industries with a high proportion of full-time employment—including professional, scientific, and technical services; finance, insurance, real estate, rental and leasing—have recovered to pre-COVID employment levels in recent months and were unchanged in January.

Among Canadians who worked at least half their usual hours, the number working from home increased by nearly 700,000 to 5.4 million in January, surpassing the previous high of 5.1 million in April during the first wave of the COVID-19 pandemic.

Average hourly wages bounced up again to 6.2% y/y, but that strength is due to the loss of lower-paying jobs in the retail and restaurant industries. 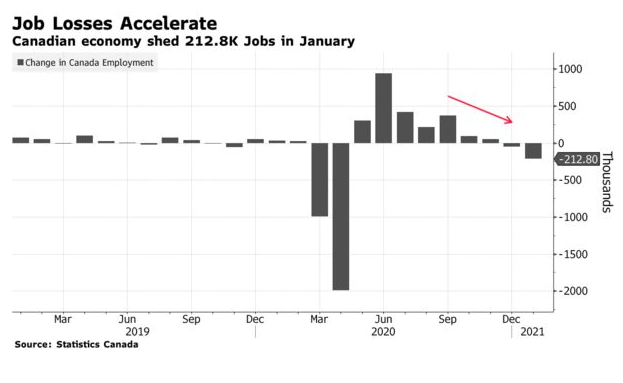 The employment losses were entirely in the two provinces that had the toughest restrictions—Ontario and Quebec—as jobs rose in 7 of the 10 provinces. The table below shows the jobless rate fell in Alberta, New Brunswick, Nova Scotia, Manitoba, PEI and Saskatchewan. 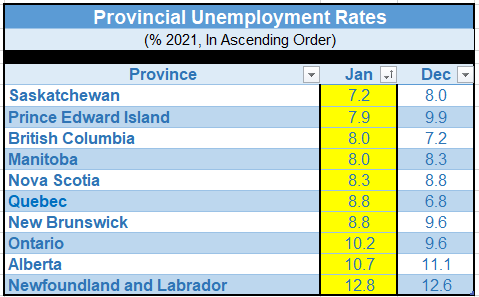 With the decline in COVID cases in recent weeks, there is some hope that restrictions will be eased. Quebec has already announced it will start to loosen some restrictions on gyms, restaurants and bars in the coming days, and Ontario is on pace to reopen more schools. However, public health officials warn that new variants of the virus remain a risk and urge for continued lockdowns.

There is no question that the bright light at the end of the very dark pandemic tunnel is a widely distributed vaccine. On that score, Canada is faring badly. The Biden administration is working hard to step-up vaccine distribution, but Canada apparently placed its vaccine orders well after the US and UK. Production issues have harshly slowed Canada’s supply of vaccines. While the US and UK have already broadened distribution to all people aged 65 and over, Canada hasn’t even finished vaccinating health care workers and long-term care residents. Reports suggest that significantly more supply will not be forthcoming until April.

The chart below describes the Canadian vaccine rollout. We now rank 34th in the world in terms of total vaccination doses administered per 100 people. 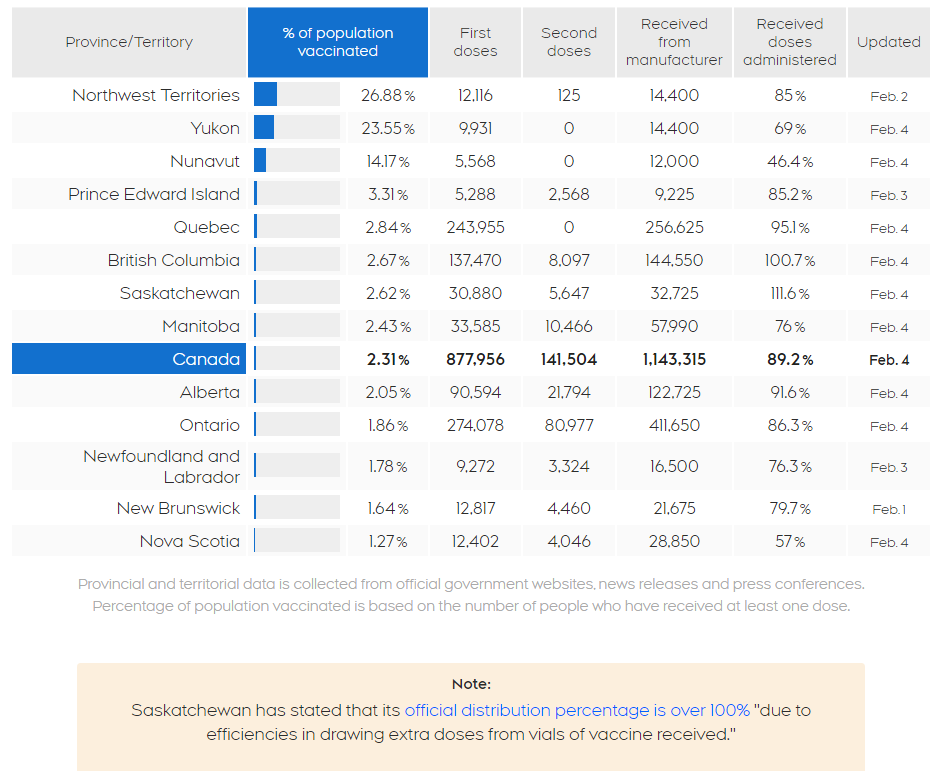