The full effects of the most recent rate hikes have not yet manifested. Statistics released today by the Canadian Real Estate Association (CREA) show that the slowdown that began in March in response to higher interest rates continued in August, albeit at a slower pace. Home sales recorded over Canadian MLS® Systems fell by 1.0% between July and August 2022. The pace of home sales last month was well below its 10-year moving average as buyers and sellers moved to the sidelines in response to rising mortgage rates and a reassessment of the outlook. While this was the sixth consecutive month-over-month decline in housing activity, it was also the smallest of the six.

It was close to an even split between the number of markets where sales were up and those where sales were down. Gains were led by the Greater Toronto Area (GTA) and a large regional mix of other Ontario markets. These were offset by Greater Vancouver, Calgary, Edmonton, Winnipeg, and Halifax-Dartmouth declines.

The actual (not seasonally adjusted) number of transactions in August 2022 came in 24.7% below the same month last year. While still a large decline, it was smaller than the 29.4% year-over-year drop recorded in July.

While some suggest that the worst of the housing correction might be behind us, recent data suggests that those sentiments are premature. The August inflation data for the U.S., released this past Tuesday, were considerably stronger than expected, especially for inflation excluding energy. To be sure, commodity prices have fallen sharply in recent weeks, tempering headline inflation. But many other components of core inflation have proven to be very sticky. In consequence, market-driven interest rates have risen further, and next week it is widely expected that the Fed will hike the overnight rate by at least 75 bps.

In Canada, we will see the August CPI data next Tuesday. The Bank of Canada aims to hike the policy rate target when it meets again on October 25. In the past, it took overnight rates above the inflation rate to finally break the back of inflation. Bay Street has been revising up its estimates for the terminal policy rate target all week. I believe it will be well above 4.0%. 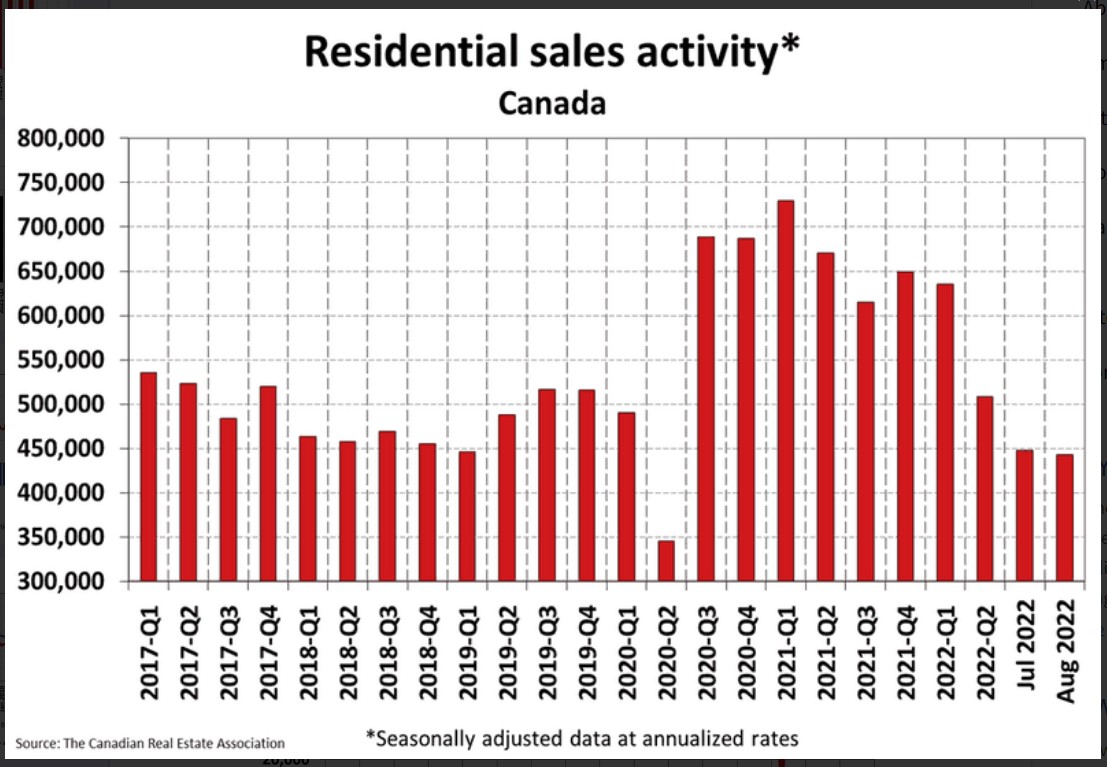 Sellers are reticent to accept that the sky-high prices posted early this year are no longer clearing markets. Rather than rapid-fire turnover, newly listed properties remain on the market for much longer,  multiple-bidding situations are rare, and many successful buyers are adding financing conditions to their offers.

The number of newly listed homes fell to 5.4% on a month-over-month basis in August. This built on the 5.9% decline noted in July, as some sellers appear content to stay on the sidelines until more buyers are ready to get back into the market. The decline in new supply was broad-based, with listings decreasing in about 80% of local markets, including every large market except for Montreal, where new supply was mostly flat from July to August. 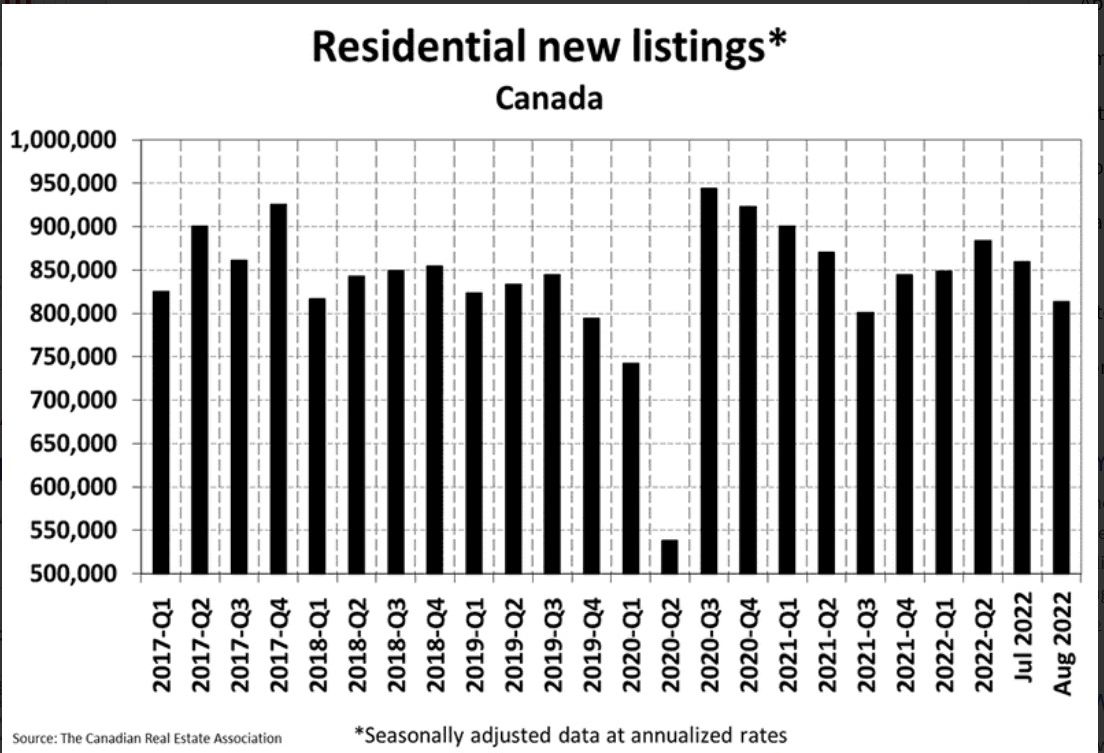 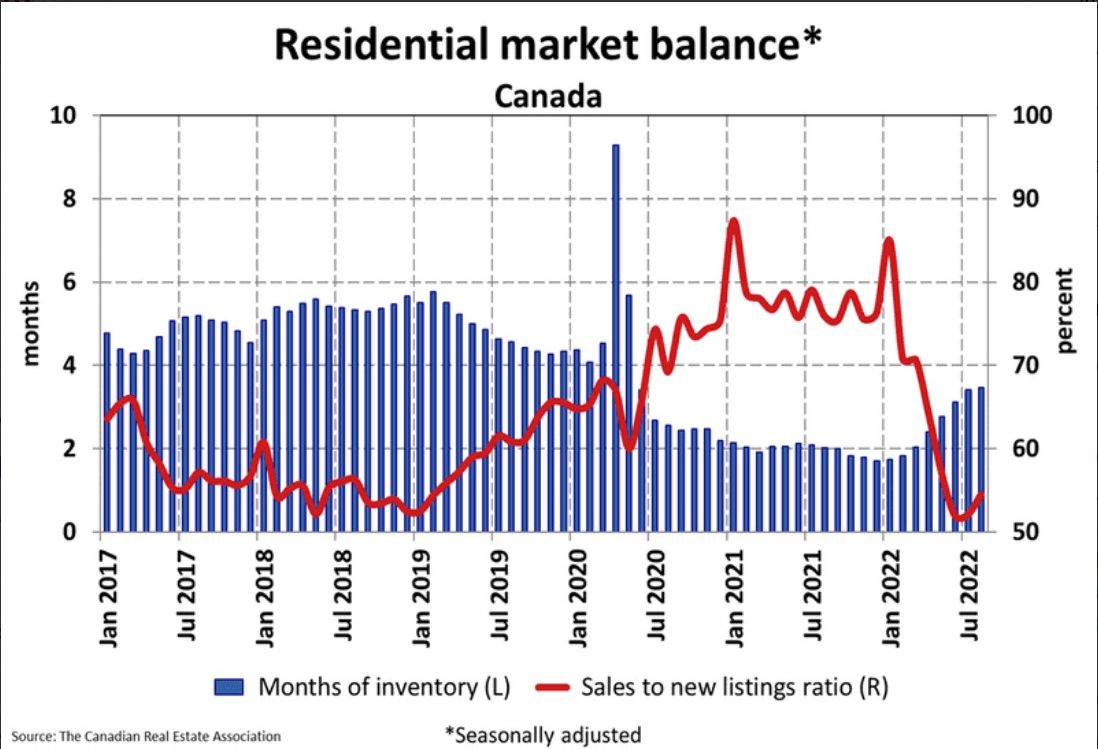 The Aggregate Composite MLS® Home Price Index (HPI) edged down 1.6% on a month-over-month basis in August 2022, not a small decline historically, but smaller than in June and July.

Breaking it down regionally, most of the monthly declines in recent months have been in markets across Ontario and, to a lesser extent, in British Columbia; however, in August, Ontario markets contributed most to the overall national decline.

Looking across the Prairies, prices in Alberta appear to have peaked. Prices still rise slightly in Saskatchewan, while Manitoba recorded the only decline. In Quebec, prices have dipped somewhat in the last couple of months. On the East coast, the softening of prices confined to Halifax-Dartmouth is now also appearing in New Brunswick, Newfoundland and Labrador. By contrast, prices in PEI continue to edge ahead on a month-over-month basis.

The non-seasonally adjusted Aggregate Composite MLS® HPI was still up by 7.1% on a year-over-year basis in August. This was the first single-digit increase in almost two years, as year-over-year comparisons have been winding down at a brisk pace from the near-30% record year-over-year gains logged just six months ago. 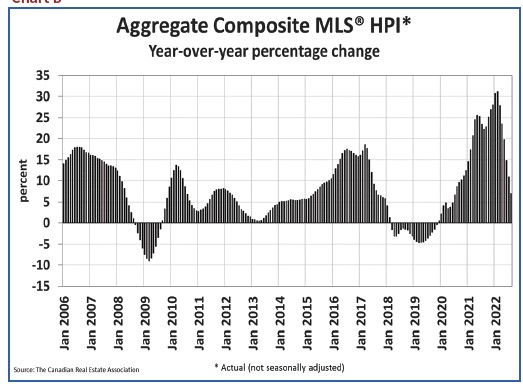 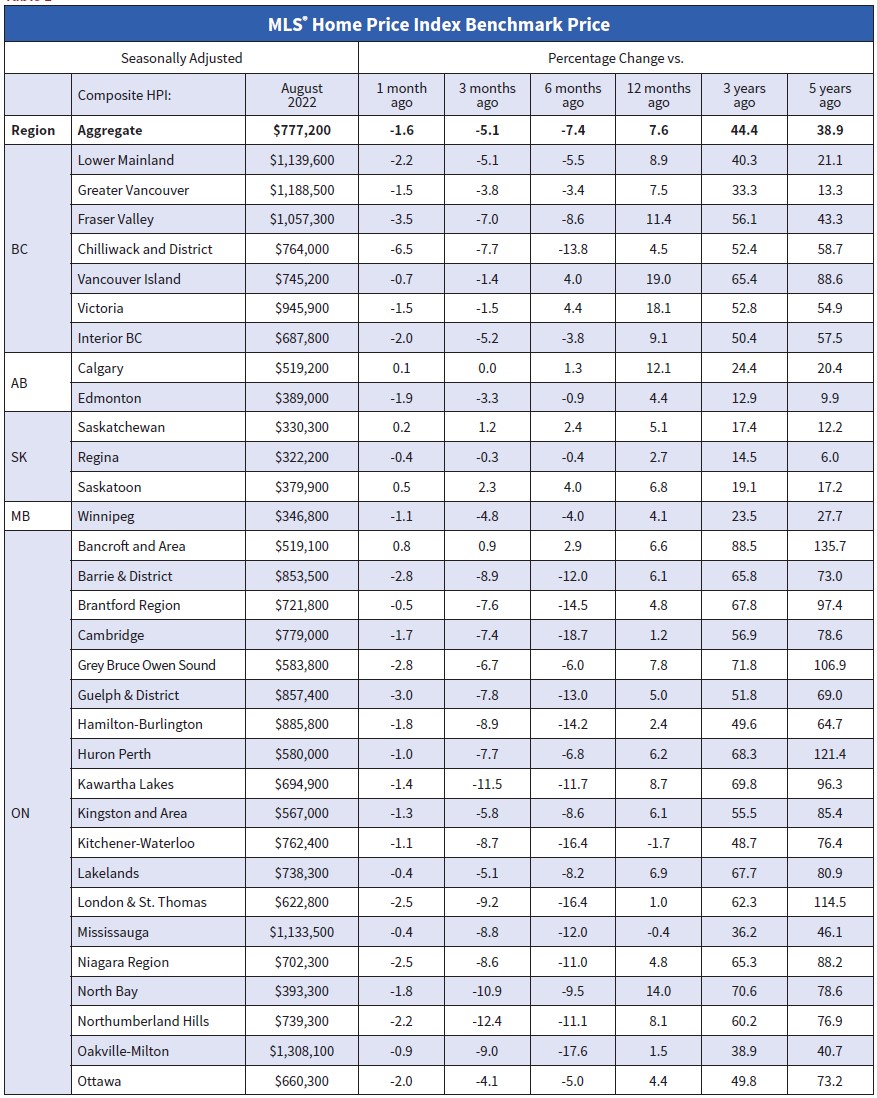 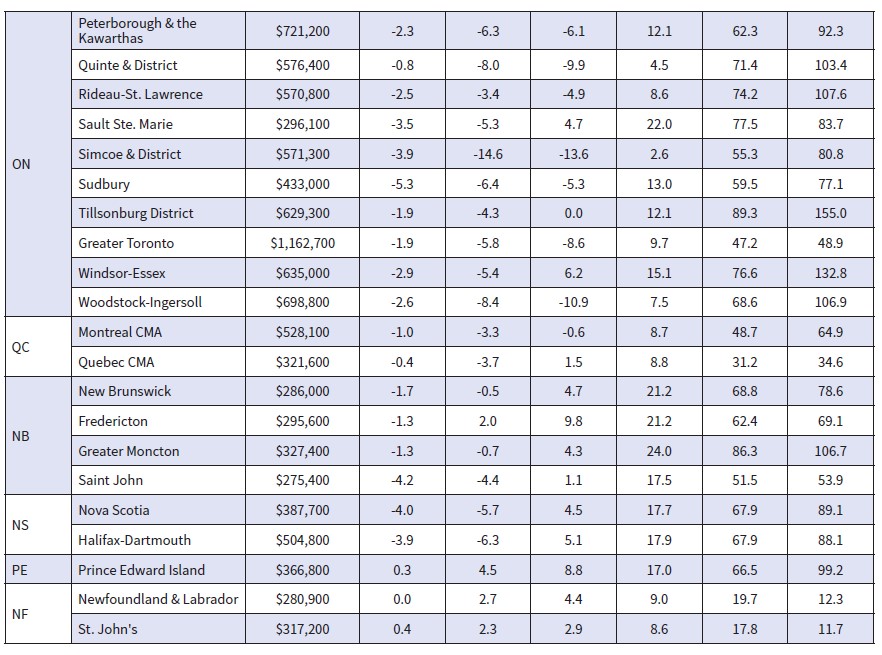 The Canadian housing correction continues as the Bank of Canada aggressively tightens monetary policy. Using average benchmark prices by region, the first table above shows how much prices have fallen since their recent peak in March this year. For Canada, average prices have dipped 11.1%, led by the 13.7% decline in Greater Toronto. Greater Vancouver has posted an 11.7% drop. The second table shows that, despite these downdrafts, year-over-year price gains remain positive, reflecting the super-charged home price inflation from August 2021 to March 2022.

By the end of the first quarter of 2023, all the y/y appreciation will be obliterated. The 50% rise in home prices over the first two years of the pandemic was fuelled by record-low interest rates. The overnight rate was a mere 25 bps. It will soon be 400 bps. No wonder recent variable-rate mortgage buyers are beginning to confront their trigger points.