Thanks to the lack of tourism and the reduced influx of immigrants, rents in Toronto have declined, changing the economics of condo investing. Many Airbnb properties in the short-term rental pool are now available for long-term rental, and the supply of newly built condos continues to rise. Lower rents have created a negative cash flow situation for some investors who are now anxious to sell.  As the supply of condo listings rises, demand has also slowed as many buyers look for less densified space. Combine that with the dearth of tourists and new immigrants, and it’s no wonder that the condo sector–especially smaller condos, is the weakest in the housing market.

The Canadian federal government has committed to increased immigration targets for the next three years to make up for the shortfall in 2020. this was featured in a Government of Canada news release stating, “The pandemic has highlighted the contribution of immigrants to the well-being of our communities and across all sectors of the economy. Our health-care system relies on immigrants to keep Canadians safe and healthy. Other industries, such as information technology companies and our farmers and producers, also rely on the talent of newcomers to maintain supply chains, expand their businesses and, in turn, create more jobs for Canadians”. Canada aims to welcome 401,000 new immigrants in 2021, 411,000 in 2022 and 421,000 in 2023.

The newly available vaccine will also encourage a return of short-term renters, but probably not until 2022 at the earliest.

Home sales edged down moderately for extremely high levels in both October and November. Notwithstanding this, monthly activity is still running well above historical levels (see chart below).Actual (not seasonally adjusted) sales activity posted a 32.1% y-o-y gain in November – the same as in October. It was a new record for that month by a margin of well over 11,000 transactions. For the fifth straight month, year-over-year sales activity was up in almost all Canadian housing markets compared to the same month in 2019. Among the few markets that were down on a year-over-year basis, it is likely the handful from Ontario reflect a supply issue rather than a demand issue.

Shaun Cathcart, CREA’s Senior Economist, said, “It will be a photo finish, but it’s looking like 2020 will be a record year for home sales in Canada despite historically low supply. We’re almost in 2021, and market conditions nationally are the tightest they have ever been, and sales activity continues to set records. Much like this virus, I don’t see it all turning into a pumpkin on New Year’s Eve, but at least vaccination is a light at the end of the tunnel. Immigration and population growth will ramp back up, mortgage rates are expected to remain very low, and a place to call home is more important than ever. On top of that, the COVID-related shake-up to so much of daily life will likely continue to result in more people choosing to pull up stakes and move around. If anything, our forecast for another annual sales record in 2021 may be on the low side.” 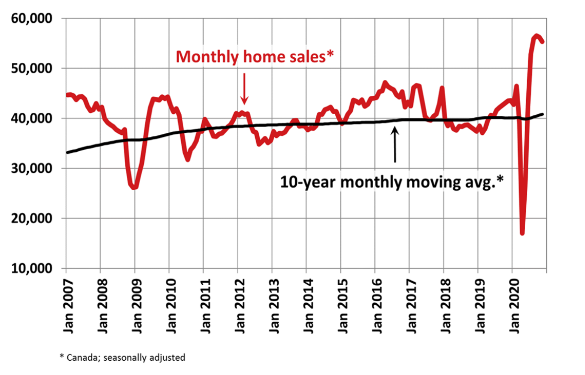 The number of newly listed homes declined by 1.6% in November, led by fewer new listings in the Greater Toronto Area (GTA) and Ottawa.

Based on a comparison of sales-to-new listings ratio with long-term averages, only about 30% of all local markets were in balanced market territory in November, measured as being within one standard deviation of their long-term average. The other 70% of markets were above long-term norms, in many cases well above.

The Aggregate Composite MLS® Home Price Index (MLS® HPI) rose by 1.2% m-o-m in November 2020. Of the 40 markets now tracked by the index, all but one were up between October and November.

The non-seasonally adjusted Aggregate Composite MLS® HPI was up 11.6% on a y-o-y basis in November – the biggest gain since July 2017 (see chart below).

The table below shows the changing preferences of homebuyers for less densely populated areas outside the city core. With more people working from home, shorter commuting times don’t seem to be as important as before.

The largest y-o-y gains – between 25- 30% – were recorded in Quinte & District, Tillsonburg District, Woodstock-Ingersoll, and many Ontario cottage country areas.

Prices were up in the 10-15% range in the GTA, Oakville-Milton and Mississauga.

The MLS® HPI provides the best way to gauge price trends because averages are strongly distorted by changes in sales activity mix from one month to the next. 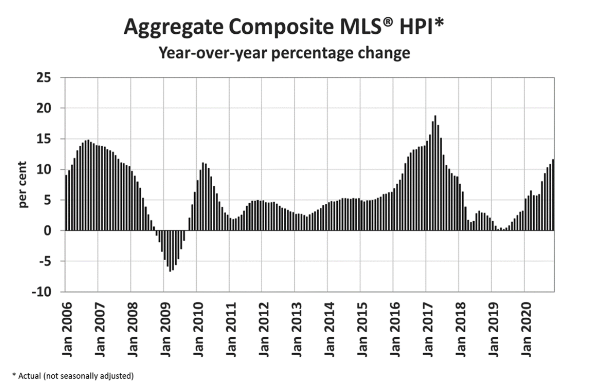 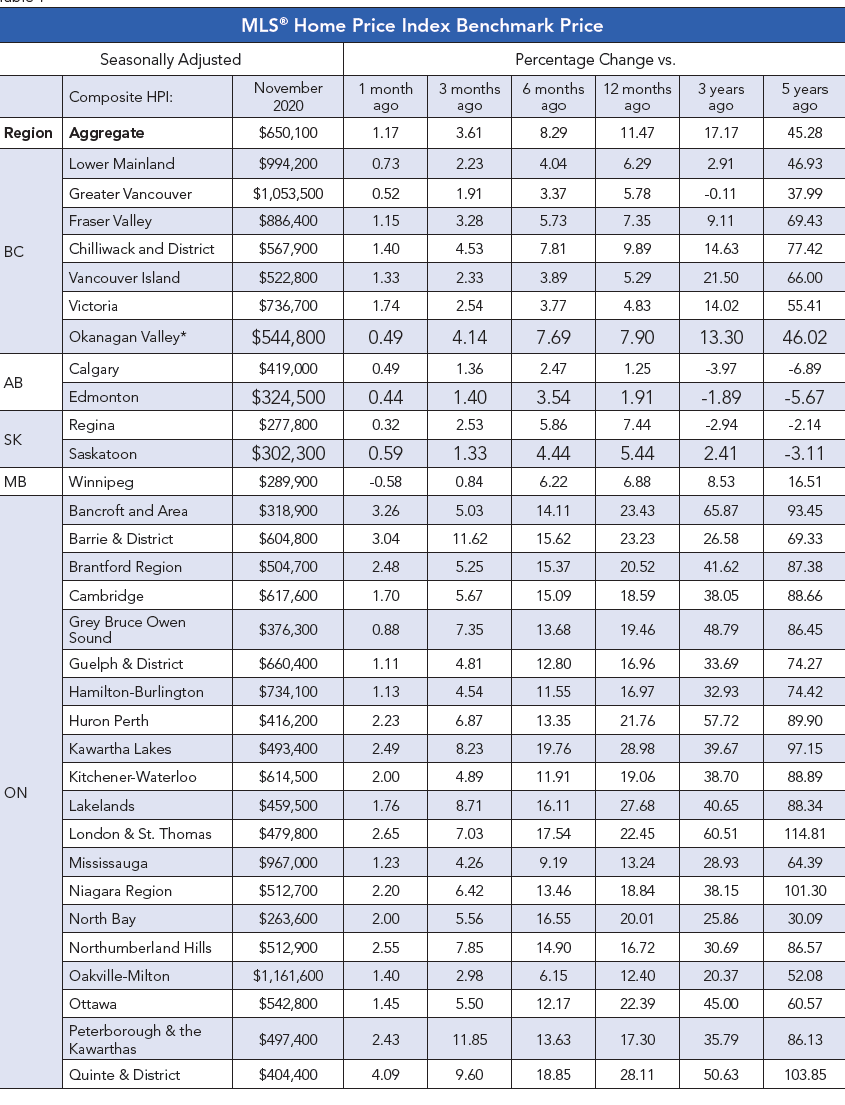 Housing strength is largely attributable to record-low mortgage rates and strong demand for more spacious accommodation by households that have maintained their income level during the pandemic. The hardest-hit households are low-wage earners in the accommodation, food services, non-essential retail and tourism-related sectors. These are the folks that can least afford it and typically are not homeowners. The good news is that the housing market is contributing to the recovery in economic activity.

The level of sales is firm and holding up better than most pundits had expected. Despite the historic setback to the market earlier this year caused by the pandemic, CREA projects national sales will hit a record of 544,413 units in 2020, representing an 11.1% increase from 2019, and rise again next year by 7.2% to around 584,000 units.