Canadian Home Sales Slow Again in May, Shifting To A Buyers Market in GTA

Statistics released today by the Canadian Real Estate Association (CREA) show that the slowdown that began in March in response to higher interest rates has broadened. In April, national home sales dropped by 12.6% monthly (m/m). National home sales fell by 8.6% between April and May, building on April’s decline, leaving monthly activity at pre-COVID levels recorded in the second half of 2019. (see chart below).

Sales were down in three-quarters of all local markets, led by many larger census metropolitan areas (CMAs), including those in the Lower Mainland, Calgary, Edmonton, the Greater Toronto Area (GTA) and Ottawa. The actual (not seasonally adjusted) number of transactions in May 2022 came in 21.7% below the record for that month set last year. At a little over 50,000 units sold, the May 2022 sales figure was very close to the 10-year average for that month. 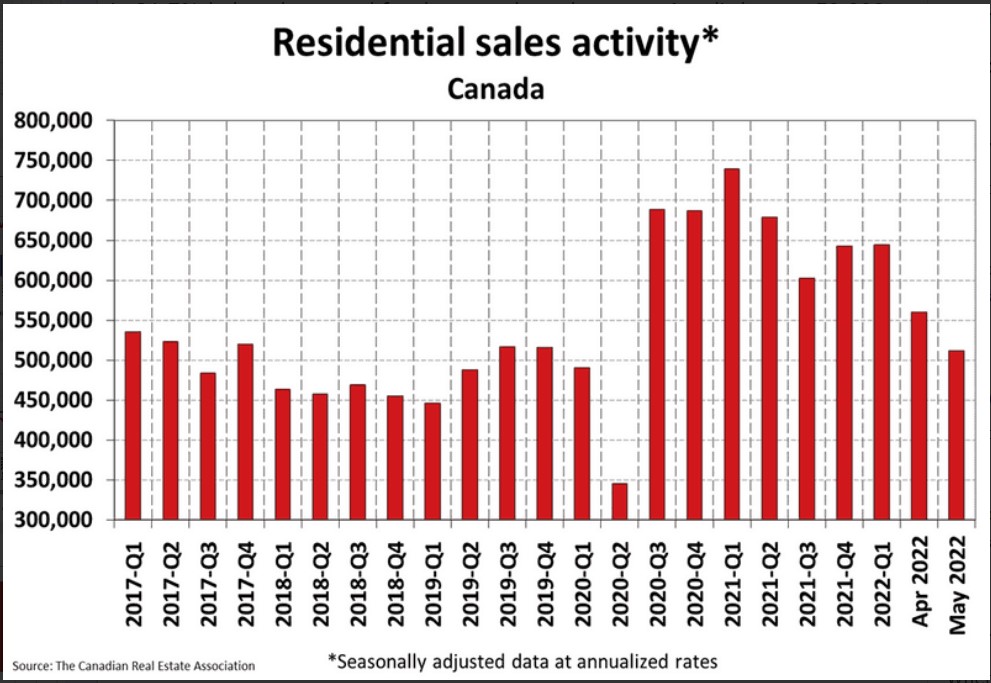 The number of newly listed homes climbed 4.5% month-over-month in May. The monthly increase was influenced by a jump in new supply in Montreal, while new listings in the GTA posted a modest decline.

Almost three-quarters of local markets were balanced based on the sales-to-new listings ratio being between one standard deviation above or below the long-term average in May 2022 – the most significant number since the fall of 2019. A little less than one quarter was in seller’s market territory, while a small handful was in buyer’s market territory.

There were 2.7 months of inventory on a national basis at the end of May 2022, still historically low but up by a month from the tightest conditions ever recorded just six months ago. The long-term average for this measure is a little over five months. 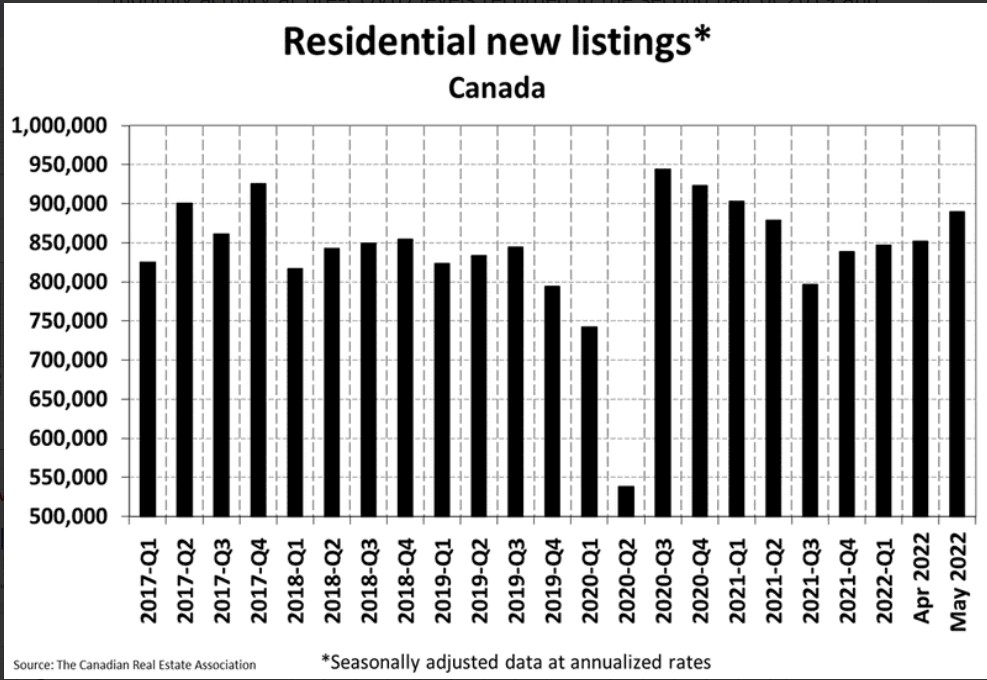 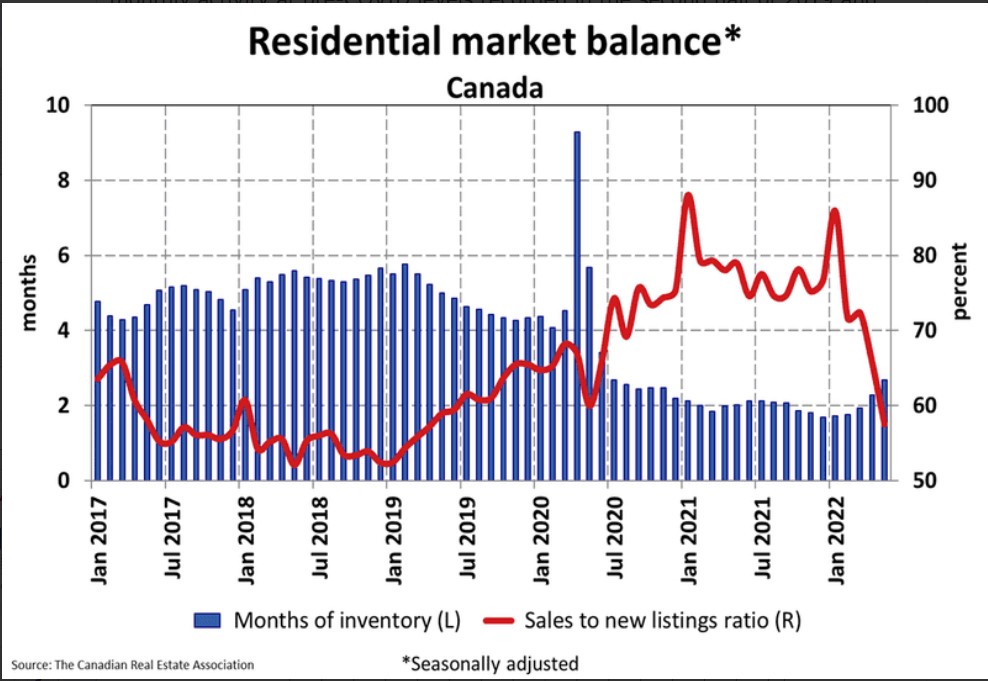 The non-seasonally adjusted Aggregate Composite MLS® HPI was still up by 23.8% on a year-over-year basis in April, although this was a marked slowdown from the near-30% record increase logged just two months earlier.

Regionally, most of the monthly declines were in markets in Ontario. While most Ontario markets saw prices dip in May, prices rose in cottage country.

Prices rose in Vancouver Island but were flat in Greater Vancouver. Prices fell modestly in the Fraser Valley and posted a larger decline in Chilliwack. Prices were more or less unchanged across the Prairies save for small gains in Saskatoon and Winnipeg.

Meanwhile, Quebec, New Brunswick and PEI continued to outperform, while prices in Nova Scotia and Newfoundland and Labrador edged up slightly.

The non-seasonally adjusted Aggregate Composite MLS® HPI was still up by 19.8% y/y in May. However, this posted a marked slowdown from the near-30% record increases logged in January and February. 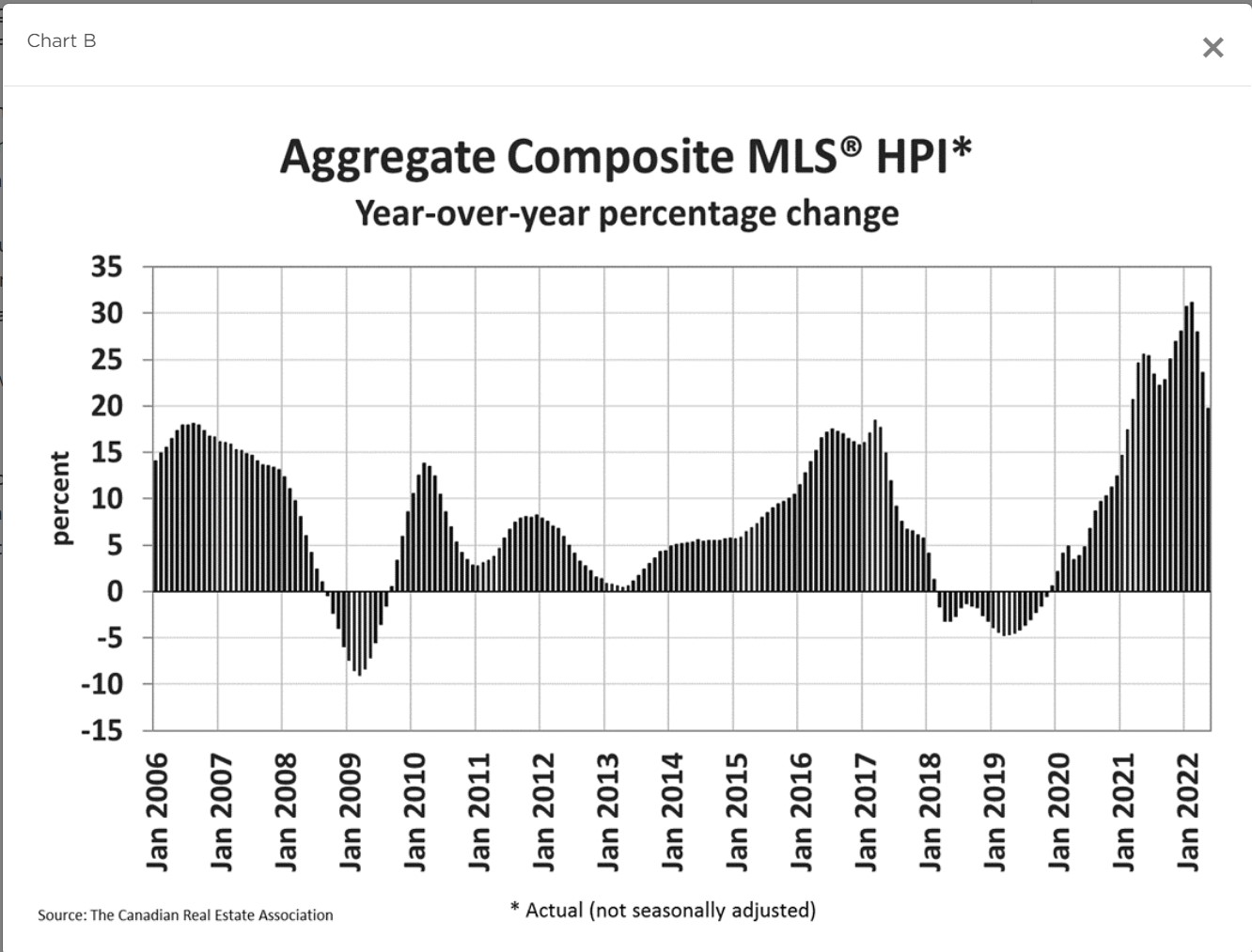 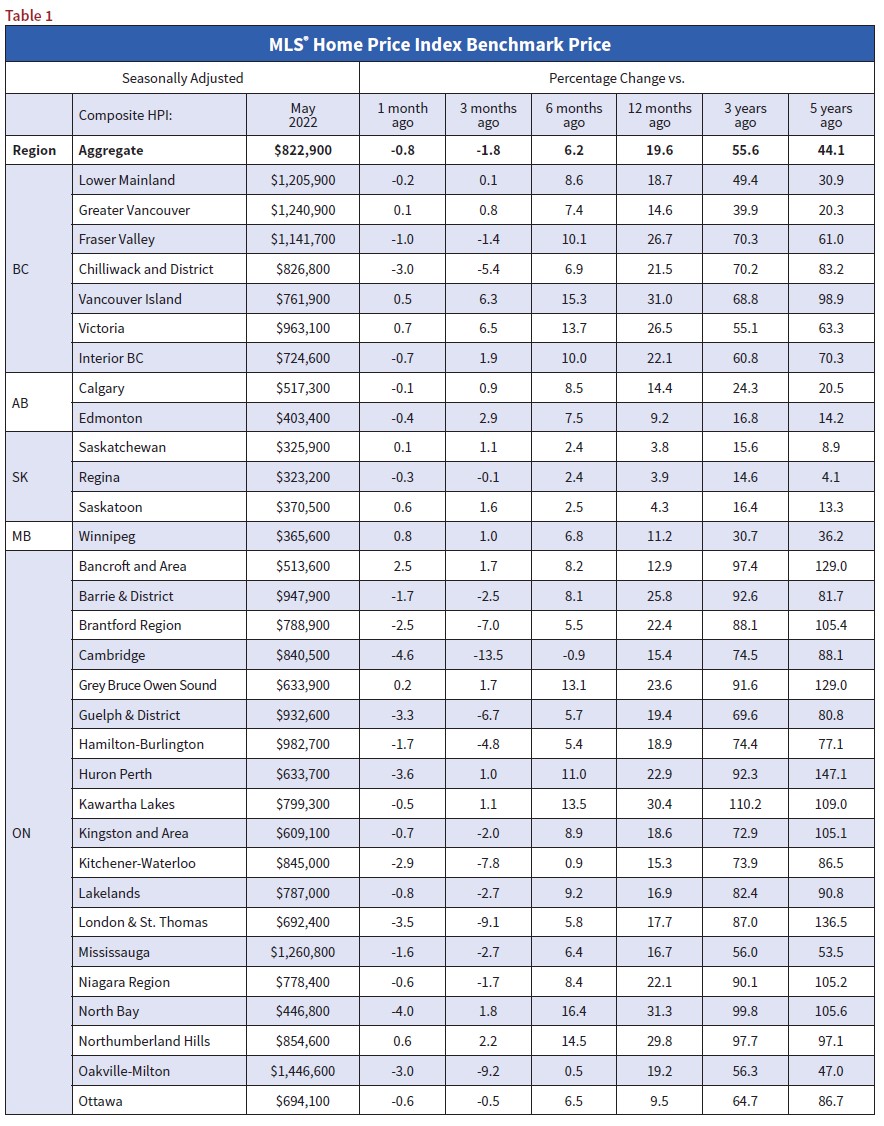 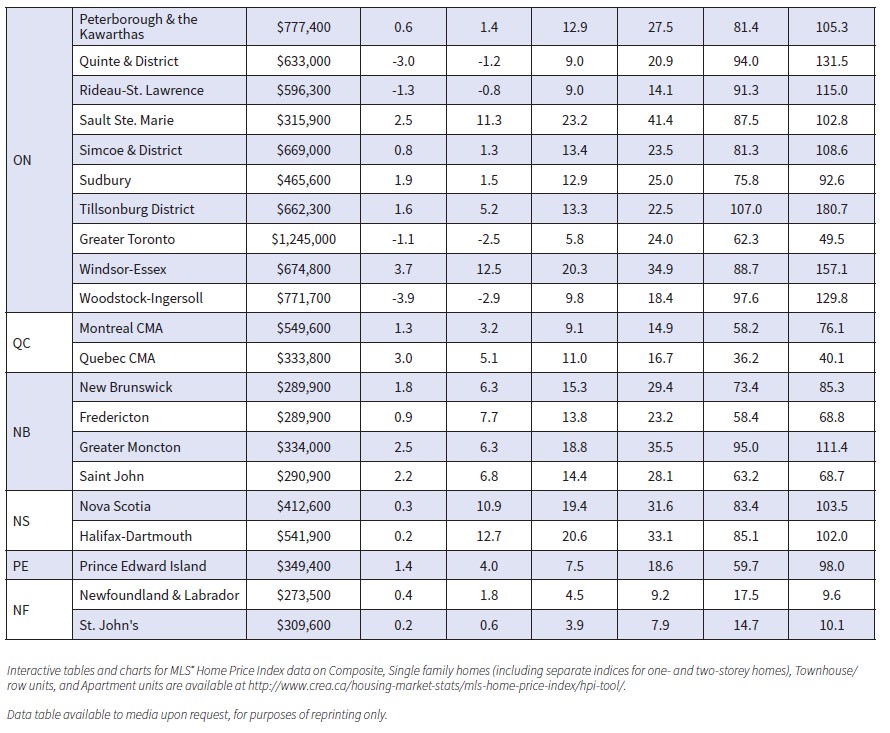 The three-month slide in Canadian home sales has now returned sales to pre-COVID levels after running roughly 3)% above that level for the  18 months through February. The most significant slowdown has occurred in Ontario, especially outside the core Toronto region. New listings have risen, but inventories remain low. The sales-to-new listings ratio has fallen sharply to 57.5%, its lowest level since early 2019. Prices have fallen moderately, taking the year-over-year gain down to 19.8% from 23.6% y/y in April. The average home price is now up just 3.4% y/y, which is down 11% from the February peak.

Toronto is cooling, but the suburbs are cooling even faster, while the exurbs (think London, Woodstock, Barrie) are seeing the sharpest shifts. The sales-to-new listings ratio for all of Ontario sunk below 50%, a level we’ve only seen during the 2009 recession and the dark days of the early 1990s. Elsewhere, Alberta remains relatively tight, albeit with stalling prices, while Vancouver, Ottawa and Montreal are mixed between the extremes.

Interest rates have risen sharply from their COVID-induced lows. Mortgage rates have risen sharply from lows of about 1.5% to nearly 5% for 5-year fixed rates. Variable mortgage rates are on their way to 4%-to-4.5% by yearend. By late summer, any still-favourable rate holds will be gone, and this new interest-rate reality will fully sink in. Stress tests at the contract rate plus 200 bps are now nearing 7%; they’ll also be pushing above 5.25% in the variable space.

Many potential Canadian homebuyers now expect home prices to continue to fall in some regions. This shift in psychology will also contribute to the housing correction. In a separate report, CMHC reported that housing starts increased sharply in May. Homebuilding is at its most robust pace on record, going back to the 1950s. Given the record-low unemployment rate, home construction is constrained by record-high job vacancies in the sector, shortages of materials, and rising wage rates. Construction costs have risen sharply in the past year. With higher mortgage rates in the future, the deceleration in sales could lead to slower housing starts next year.

Finally, the Federal Reserve hiked interest rates by 75 bps today, intensifying the inflation fight. This opens the door for a 75 bps hike by the Bank of Canada when it meets again on July 13. It is now widely expected that the US policy rate, the overnight fed funds rate will exceed 4% by yearend. Canada’s central bank had already announced its intention to hike the overnight rate here more forcefully and has suggested that it will take an overnight rate above 3% to break the back of inflation. The overnight rate now is only 1.5%. A further correction in housing is likely in the coming months. As the economy’s most interest-sensitive sector, housing is the key transmission mechanism for tighter monetary policy to slow the economy and bring inflation under control.