Statistics released today by the Canadian Real Estate Association (CREA) show that the slowdown that began in March in response to higher interest rates continued in July, albeit at a slower pace. Home sales recorded over Canadian MLS® Systems fell by 5.3% between June and July 2022. The pace of home sales last month was well below its 10-year moving average as buyers and sellers moved to the sidelines in response to rising mortgage rates and a reassessment of the outlook. While this was the fifth consecutive month-over-month decline in housing activity, it was also the smallest of the five.

Sales were down in about three-quarters of all local markets, led by the Greater Toronto Area (GTA), Greater Vancouver, Fraser Valley, Calgary and Edmonton.

The actual (not seasonally adjusted) number of transactions in July 2022 came in 29.3% below that same month last year.

Housing market analysts at the Canadian banks continued to revise their home price forecasts over the next year. Royal Bank, TD, Desjardin and BMO all project that Canadian benchmark prices will fall roughly 20%-to-25% from their February peak by the end of 2023. Of course, this will vary from region to region. The hardest hit has been the geographies where prices surged the most, especially in the Greater Golden Horseshoe in Ontario and, to a lesser extent, in BC.

However, even if these forecasts prove to be correct, home prices in most regions will remain well above the levels posted before the pandemic began in early 2020. Housing in Canada’s largest cities will remain unaffordable for median-income households. 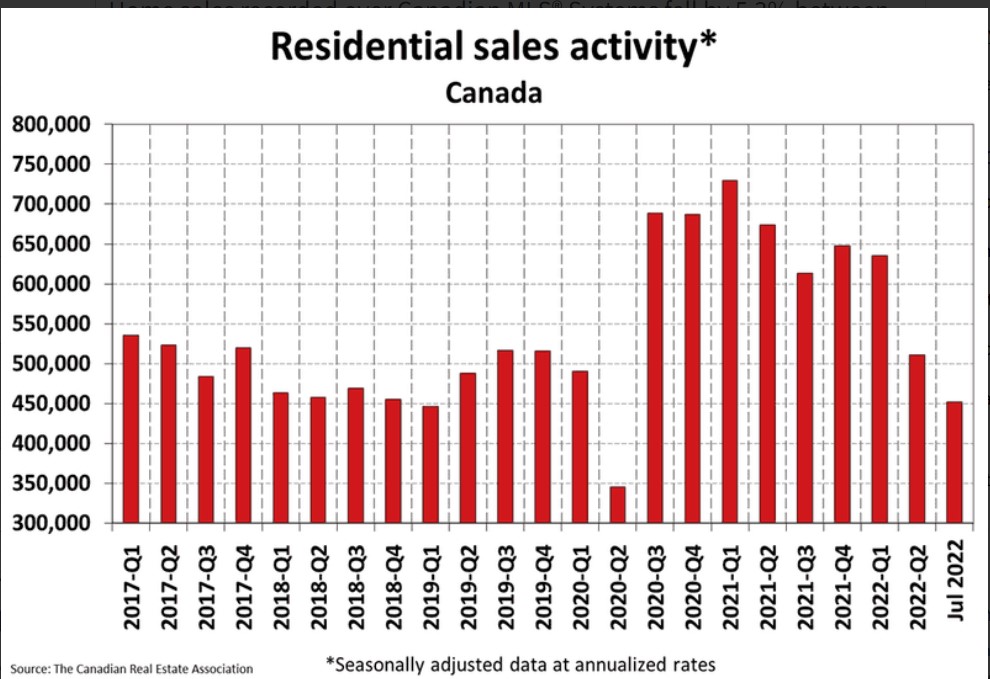 The number of newly listed homes fell back by 5.3% month-over-month in July. The decline in new supply was broad-based, with listings decreasing in about three-quarters of local markets, including most significant markets.

There were 3.4 months of inventory on a national basis at the end of July 2022, still historically low but up quite a bit from the all-time low of 1.7 months set at the beginning of 2022. 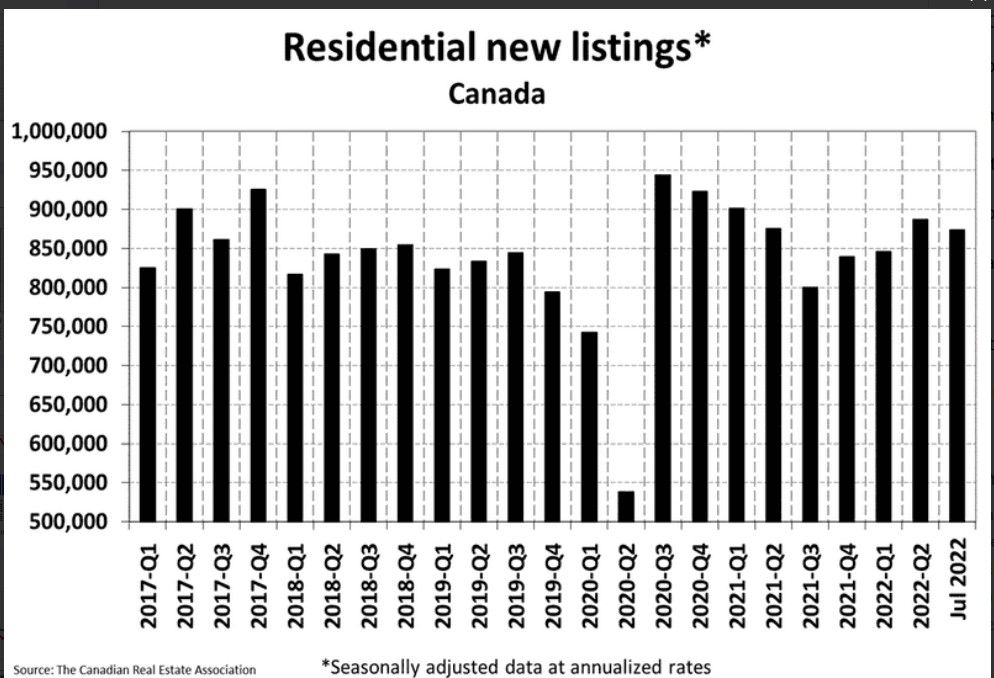 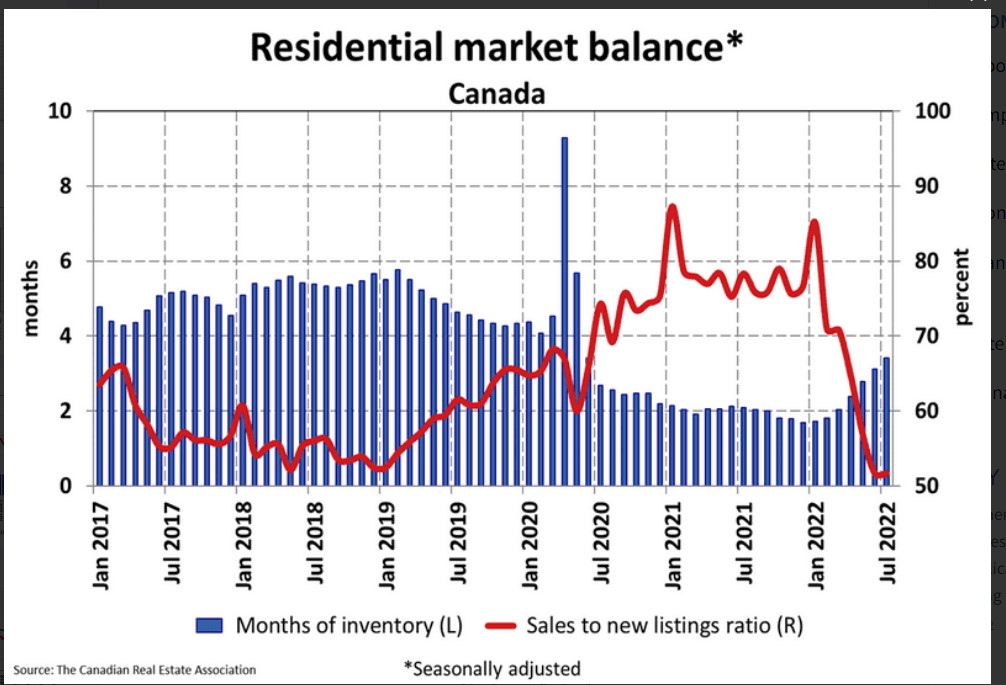 The Aggregate Composite MLS® Home Price Index (HPI) edged down 1.7% month-over-month in July 2022. This was similar but less than the 1.9% decline in June.

Regionally, most of the monthly declines in recent months have been in markets across Ontario and, to a lesser extent, in British Columbia.

Prices continue to be more or less flat across the Prairies while only now showing minor signs of dipping in Quebec. On the East Coast, prices continue to rise at a much slower pace. The exception is relatively more expensive Halifax-Dartmouth, where prices have dipped slightly.

The non-seasonally adjusted Aggregate Composite MLS® HPI was still up by 10.9% on a year-over-year basis in July. However, those year-over-year comparisons have been winding down quickly from the near-30% record year-over-year increases logged in January and February. 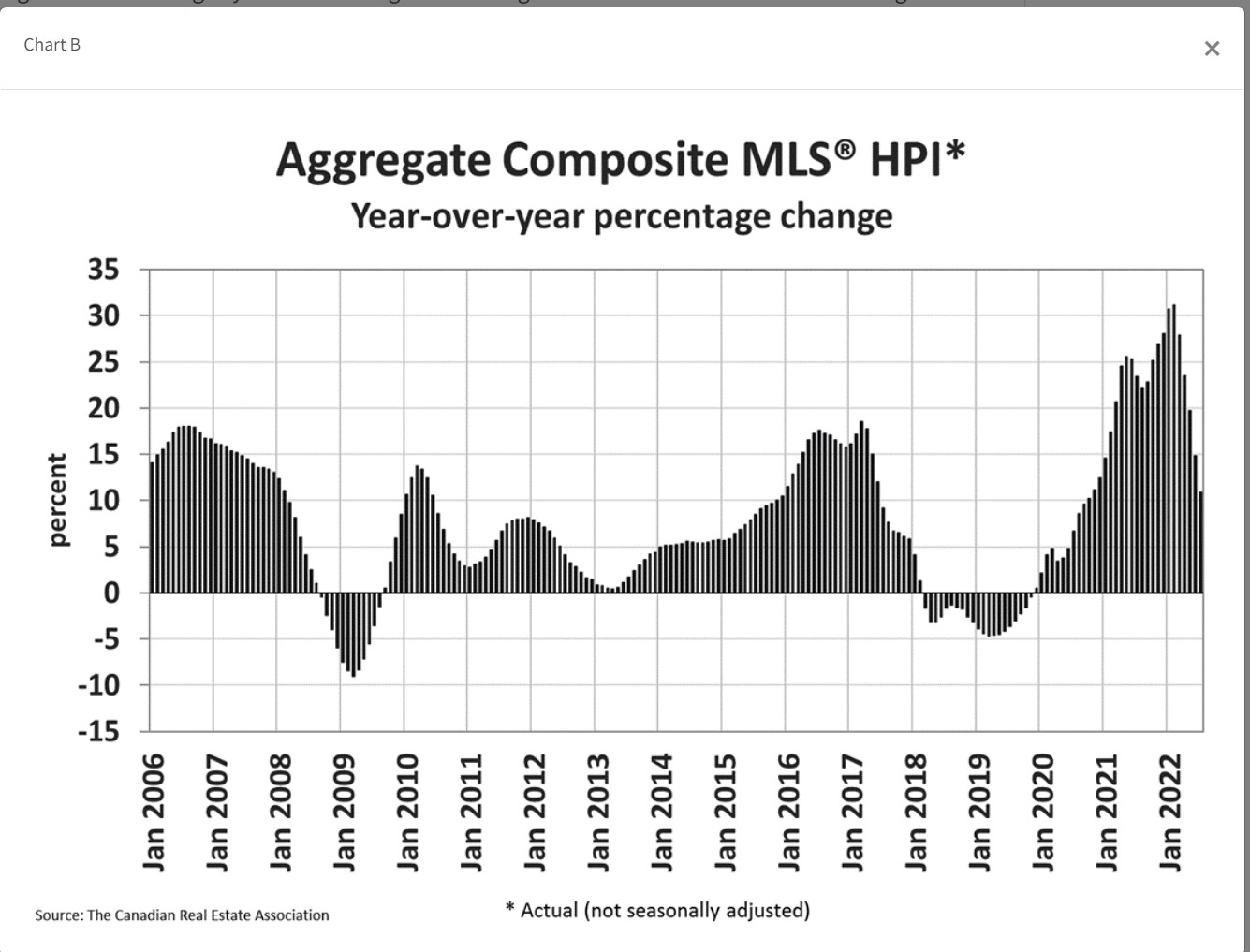 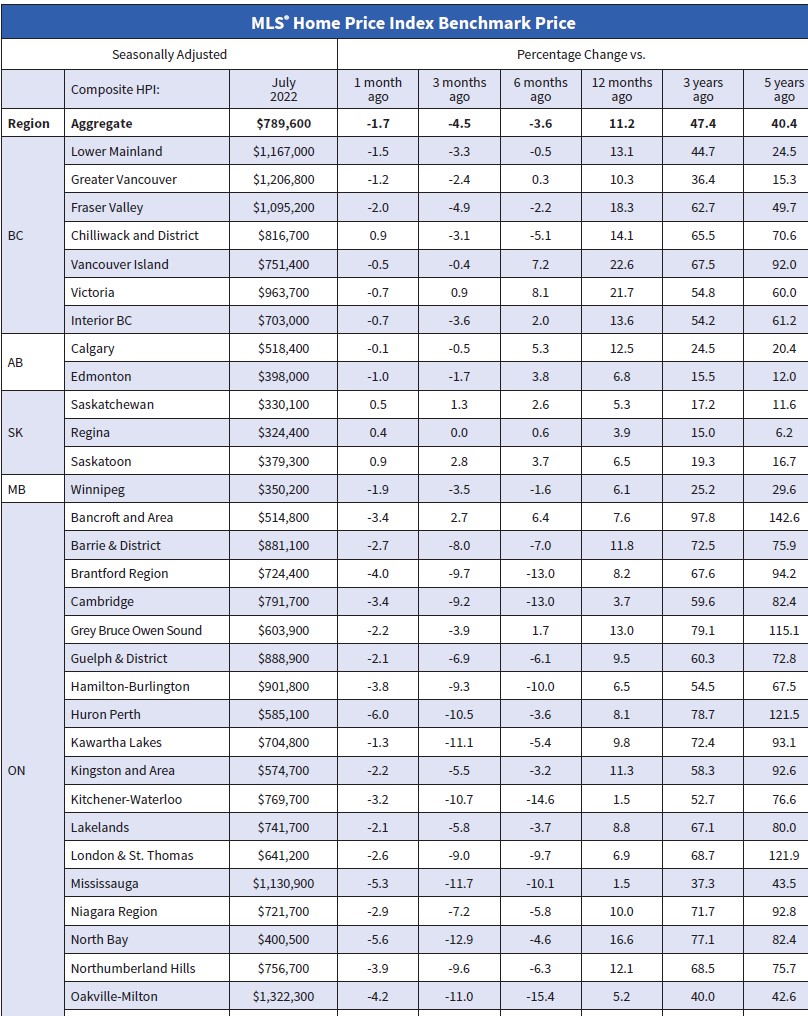 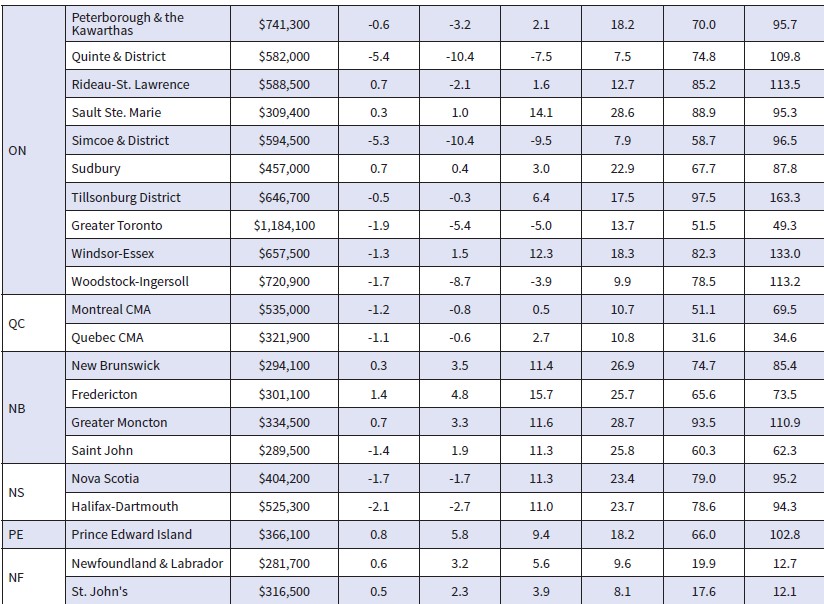 The Bank of Canada raised the overnight policy rate by a percentage point on July 13, so the full effect of this jumbo hike will likely spill into the August data. Inflation fell a bit more than expected last month in the US. We expect to see a decline in Canadian CPI inflation in July, as well, when it is published tomorrow morning. Nevertheless, central banks will continue to tighten monetary policy further. CREA today said they expect an additional 100 bp hike in the remainder of this year, which would take the policy rate up to 3.5% by yearend. That would imply a prime rate of 5.7%.

In contrast, the five-year government of Canada bond yield is hovering just under 2.8%, reflective of the economic slowdown in Canada in the second half of this year. This could make fixed mortgage rates more attractive to future borrowers. Should the prime rate hit those levels, many fixed-payment variable rate borrowers that first booked their mortgages when prime touched 2.45%–it’s low posted since mid-March 2020– might be hearing from their lenders regarding potential trigger points. Will this temper Bank of Canada rate hikes?

Probably not. The Governing Council makes its next decision on September 7. Another 50-to-75 bps is baked in at this point.