Today the Canadian Real Estate Association (CREA) released statistics showing national existing-home sales rose 0.6% in November following the whopping 8.6% surge the month before. Sales could have been higher had it not been for the limited supply of homes for sale. Homebuyers are anxious to finalize purchases before the Bank of Canada hikes interest rates next year.Across the country, sales gains in Calgary, Edmonton, the B.C. interior, Regina and Saskatoon offset declines in activity in the GTA and Montreal.

The actual (not seasonally adjusted) number of transactions in November 2021 was firm historically, edging down a scant 0.7% on a year-over-year basis, missing the 2020 record for that month by just a few hundred transactions.

On a year-to-date basis, some 630,634 residential properties have traded hands via Canadian MLS® Systems between January and November 2021, far surpassing the annual record 552,423 sales for all of 2020.

“The fact is that the supply issues we faced going into 2020, which became much worse heading into 2021, are even tighter as we move into 2022. Interest rate hikes will make it even harder for new entrants to break into the market next year, even though activity may remain robust as existing owners continue to move around in response to all of the changes to our lives since COVID showed up on the scene. As such, the issue of inequality in the housing space will remain top of mind. One wildcard will be what policymakers decide to do with the national mortgage stress test, which could act as a kind of cushion against rising rates for young and/or first-time buyers. It could also make things that much harder for them,” said Shaun Cathcart, CREA’s Senior Economist. 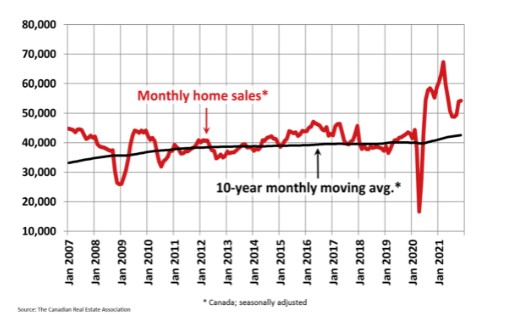 The number of newly listed homes rose by 3.3% in November compared to October, driven by gains in a little over half of local markets, including the GTA, Lower Mainland, Montreal, and many markets in Ontario’s Greater Golden Horseshoe.

There were just 1.8 months of inventory on a national basis at the end of November 2021, tied with March 2021 for the lowest level ever recorded. The long-term average for this measure is more than 5 months. 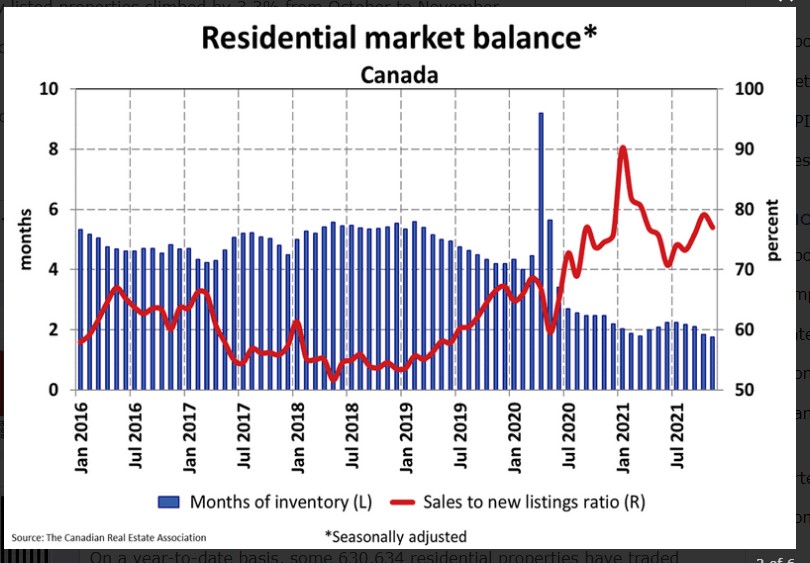 Year-over-year price growth has crept back up to nearly 25% in B.C., though it remains lower in Vancouver, on par with the provincial number in Victoria, and higher in other parts of the province.

Year-over-year price gains are still in the mid-to-high single digits in Alberta and Saskatchewan, while gains have risen to about 13% in Manitoba.

Ontario saw year-over-year price growth hit 30% in November, with the GTA continuing to surge ahead after trailing most other parts of the province for most of the pandemic.

Greater Montreal’s year-over-year price growth remains at a little over 20%, while Quebec City was only about half that.

Price growth is running above 30% in New Brunswick (higher in Greater Moncton, lower in Fredericton and Saint John), while Newfoundland and Labrador is now at 10% year-over-year (lower in St. John’s). 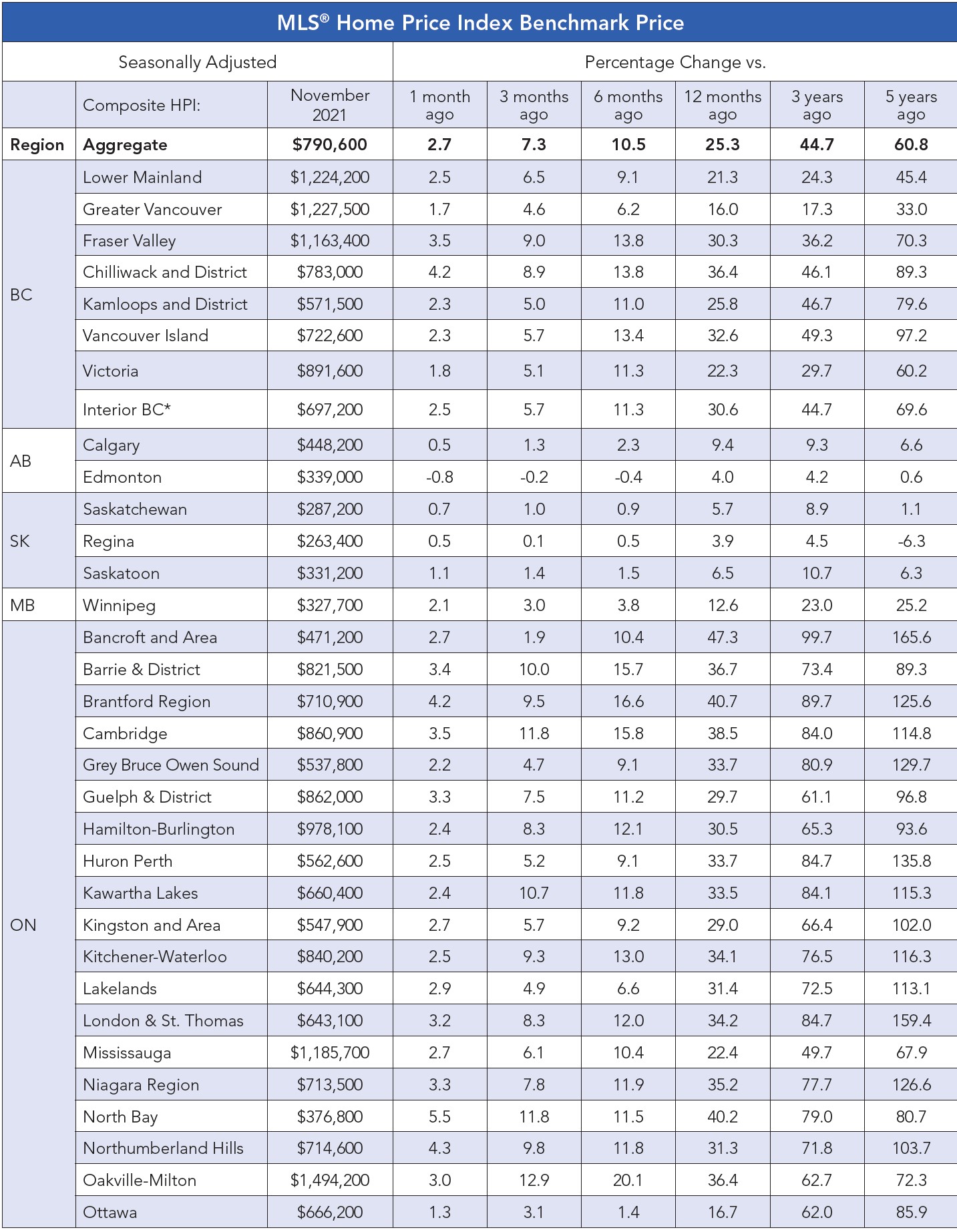 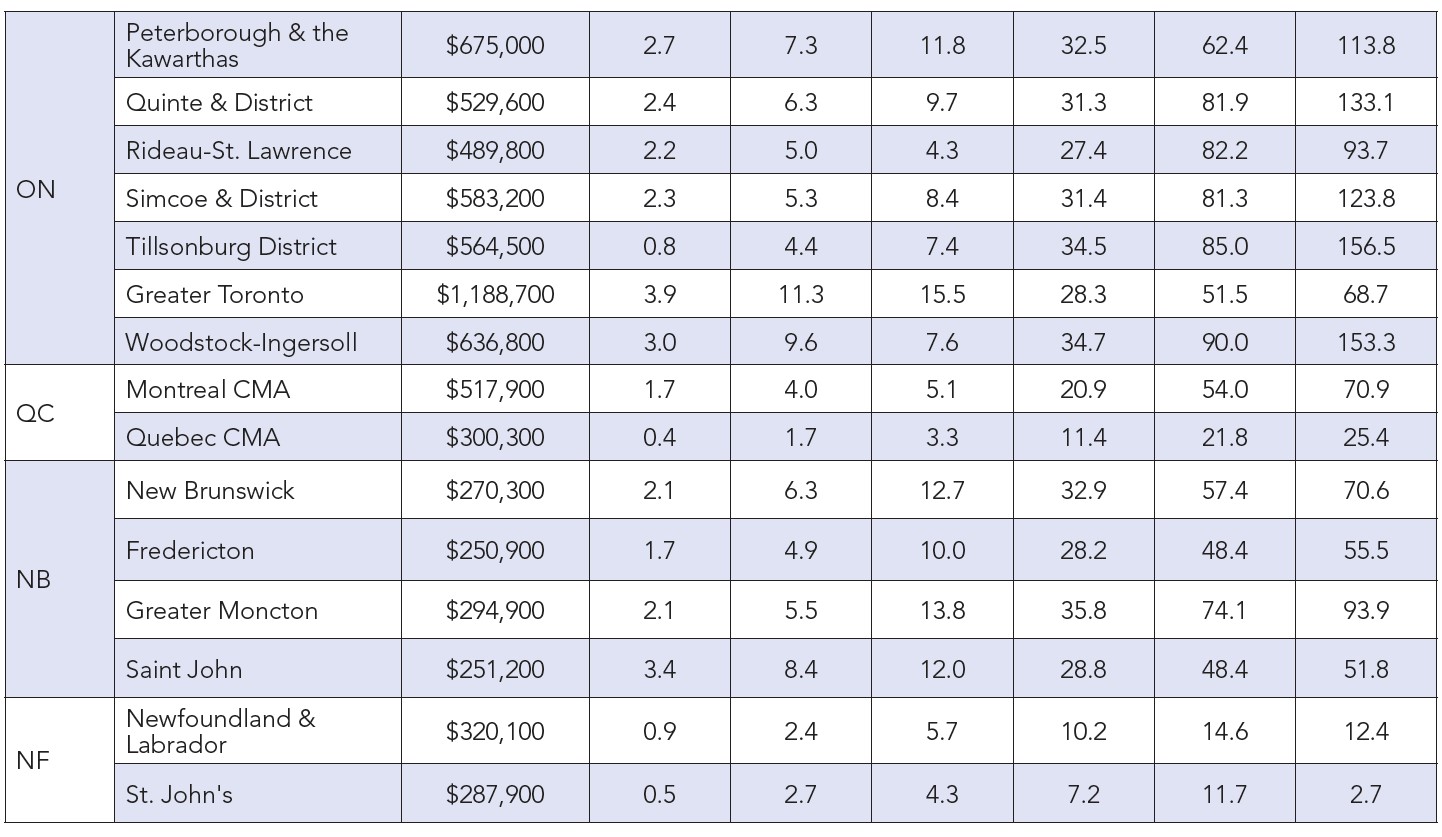 Canada continues to contend with one of the developed world’s most severe housing shortages; as our borders open to a resurgence of immigration, excess demand for housing will mount. The impediments to a rapid rise in housing supply, both for rent and purchase, are primarily in the planning and approvals process at the municipal and provincial levels. Liberal Party election promises do not address these issues.

Inflation pressures are mounting everywhere. The US posted a year-over-year inflation rate for November at 6.8%, up from 6.2% posted the month before. This undoubtedly led the US Federal Reserve to issue a hawkish statement today, intensifying their battle against inflation. They announced that they will double the pace at which it’s scaling back purchases of Treasuries and mortgage-backed securities to $30 billion a month, putting it on track to conclude the program in early 2022, rather than mid-year as initially planned.

Projections published alongside the statement showed officials expect three quarter-point increases in the benchmark federal funds rate will be appropriate next year, according to the median estimate, after holding borrowing costs near zero since March 2020.

According to Bloomberg News, “The faster pullback puts Powell in a position to raise rates earlier than previously anticipated to counter price pressures if necessary, even as the pandemic poses an ongoing challenge to the economic recovery. The Fed flagged concerns over the new omicron strain, saying that risks to the economic outlook remain, including from new variants of the virus.”

On more positive news, Canada’s inflation rate held steady at 4.7% y/y in November, well below the pace in the US. Excluding food and energy products, CPI ticked slightly lower to 3.1% from a year ago in November, or 2.7% on an annualized seasonally adjusted basis relative to the pre-shock February 2020 level. Roughly half of that 2.7% can still be attributed to rising expenses related to home-owning and car purchase or leasing. But the breadth of inflation pressure has also widened, with 58% of the consumer basket seeing faster-than-2% annualized growth in November from pre-pandemic (2019) levels on average over the last three months. That compares to 47% in February 2020. The broadening is expected to carry on in 2022 as rising input, transport and labour expenses continue to flow through supply chains for a wider swath of goods and services. Further disruptions to supply chains and energy markets from Omicron and the BC flood later in November are expected to add to price uncertainties in the near term.

In a speech today, Governor Tiff Macklem of the Bank of Canada assured the public that the Bank of Canada would remain the country’s number-one inflation fighter. Macklem clarified that flexibility in their new mandate won’t apply in situations — like now — when inflation is considerably above target.

At a press conference after the speech, Macklem noted he wasn’t comfortable with current elevated levels of inflation and the “time is getting closer” for policymakers to move away from the forward guidance. Markets are pricing in five interest rate hikes next year by the Bank of Canada.