Housing Continued to Surge in February

Today the Canadian Real Estate Association (CREA) released statistics showing national home sales hit another all-time high in February 2021. Canadian home sales increased a whopping 6.6% month-on-month (m-o-m), building on the largest winter housing boom in history. On a year-over-year (y-o-y) basis, existing home sales surged an amazing 39.2%. As the chart below shows, February’s activity blew out all previous records for the month.The seasonally adjusted activity was running at an annualized pace of 783,636 units in February. CREA’s revised forecast for 2021 is in the neighbourhood of 700,000 home sales. Strong demand notwithstanding, sales may be hard-pressed to maintain current activity levels in the traditionally busier spring months absent a surge of much-needed new supply. However, that could materialize as current COVID restrictions are increasingly eased and the weather starts to improve.

The month-over-month increase in national sales activity from January to February was led by the Greater Toronto Area (GTA) and several other Ontario markets, along with Calgary and some markets in B.C. These offset a considerable decline in Montreal’s sales, where new listings have started 2021 at lower levels compared to those recorded in the second half of last year.

In line with heightened activity since last summer, it was a new record for February by a considerable margin (over 13,000 transactions). For the eighth straight month, sales activity was up in the vast majority of Canadian housing markets compared to the same month the previous year. Among the eight markets that posted year-over-year sales declines in February, minimal supply at the moment is the most likely explanation.

“We are right at the start of the first undisturbed (by policy or lockdown) spring housing market in years, and we also have the most extreme demand-supply imbalance ever by a large margin. So, the question is, what is going on? I think part of it is the demand that built up due to regulatory changes in the years leading up to COVID that is playing out now. Part of it is the demand that is being pulled forward from the future either in search of a home base to ride out the pandemic or to lock down a purchase amid rapidly rising prices while securing a record low mortgage rate,” said Shaun Cathcart, CREA’s Senior Economist. “But maybe the biggest factor here is the emergence of existing owners with major equity, prompted by the great shake-up that is COVID-19 to pull up stakes and move. First-time buyers, which we have a lot of, are now having to compete with that as well.” 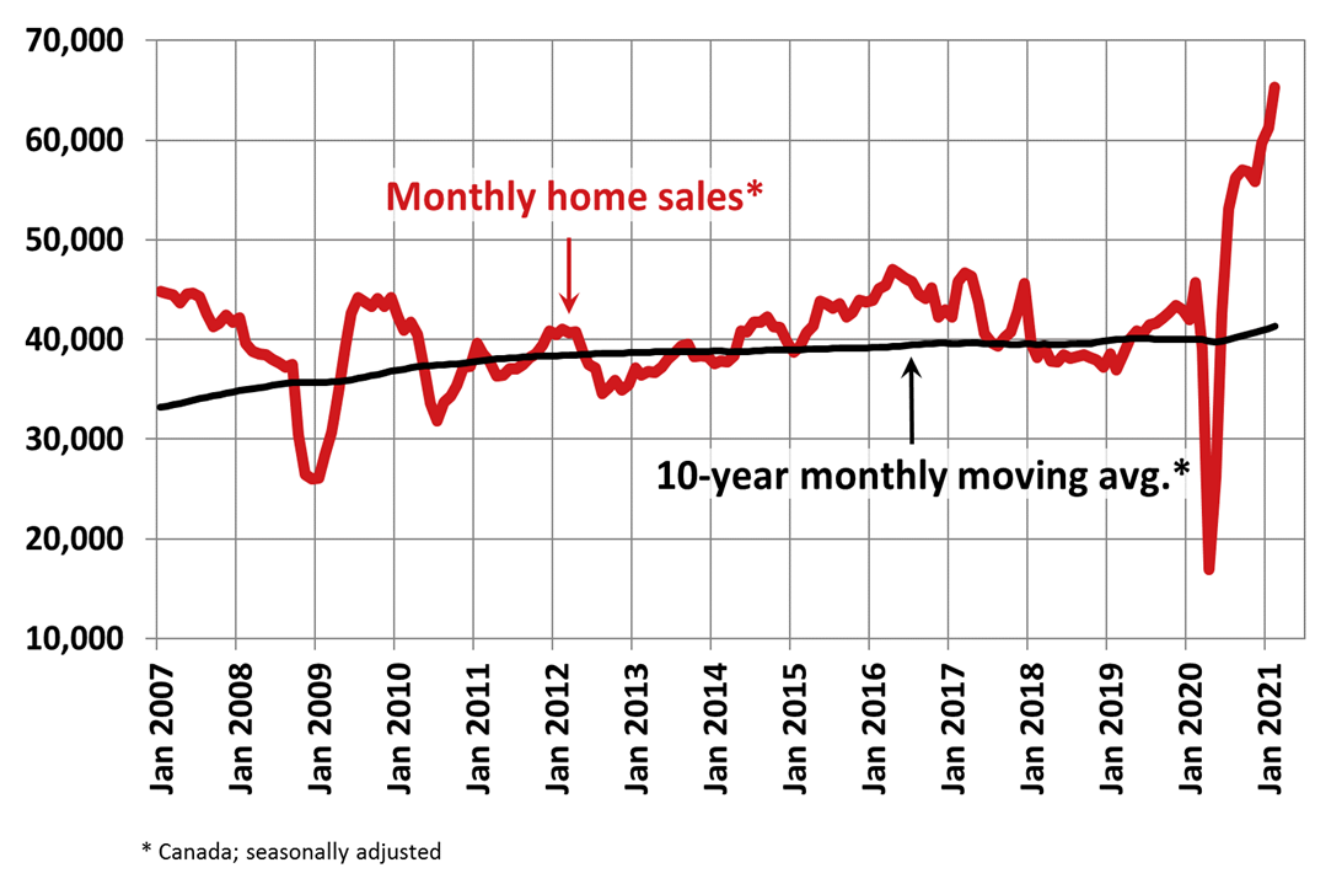 New Listings
The number of newly listed homes rebounded by 15.7% in February, recovering all the ground lost to the drop recorded in January. With sales-to-new listings ratios historically elevated at the moment, indicating almost everything that becomes available is selling, it was not surprising that many of the markets where new supply bounced back in February were the same markets where sales increased that month.

With the rebound in new supply outpacing the gain in sales in February, the national sales-to-new listings ratio came off the boil slightly to reach 84% compared to the record 91.2% posted in January. That said, the February reading came in as the second-highest on record. The long-term average for the national sales-to-new listings ratio is 54.4%.

Based on a comparison of sales-to-new listings ratio with long-term averages, only about 15% of all local markets were in balanced market territory in February, measured as being within one standard deviation of their long-term average. The other 85% of markets were above long-term norms, in many cases well above. The first two months of 2021 and the second half of 2020 have seen record numbers of markets in seller’s market territory. For reference, the pre-COVID record of only around 55% of all markets in seller’s territory was set back at the beginning of 2002.

Home Prices
The Aggregate Composite MLS® Home Price Index (MLS® HPI) jumped by 3.3% m-o-m in February 2021 – a record-setting increase. Of the 40 markets now tracked by the index, all but one were up on a m-o-m basis.

The non-seasonally adjusted Aggregate Composite MLS® HPI was up 17.3% on a y-o-y basis in February – the biggest gain since April 2017 and close to the highest on record.

The largest y-o-y gains – above 35% range – were recorded in the Lakelands region of Ontario cottage country, Tillsonburg District and Woodstock-Ingersoll.

This was followed by y-o-y price gains in the range of 25-30% in Hamilton, Guelph, Cambridge, Brantford, Huron Perth, Kitchener-Waterloo, Peterborough and the Kawarthas and Greater Moncton.

Prices were up in the range from 20-25% compared to last February in Oakville-Milton and Ottawa, 18.8% in Montreal, 16.1% in Chilliwack, in the 10-15% range on Vancouver Island, the Fraser Valley and Okanagan Valley, Winnipeg, the GTA, Mississauga and Quebec, the 5-10% range in Greater Vancouver, Victoria, Regina and Saskatoon, in the 3.5% range in Calgary and Edmonton, and 2.6% in St. John’s.

Detailed home price data by region is reported in the table below. 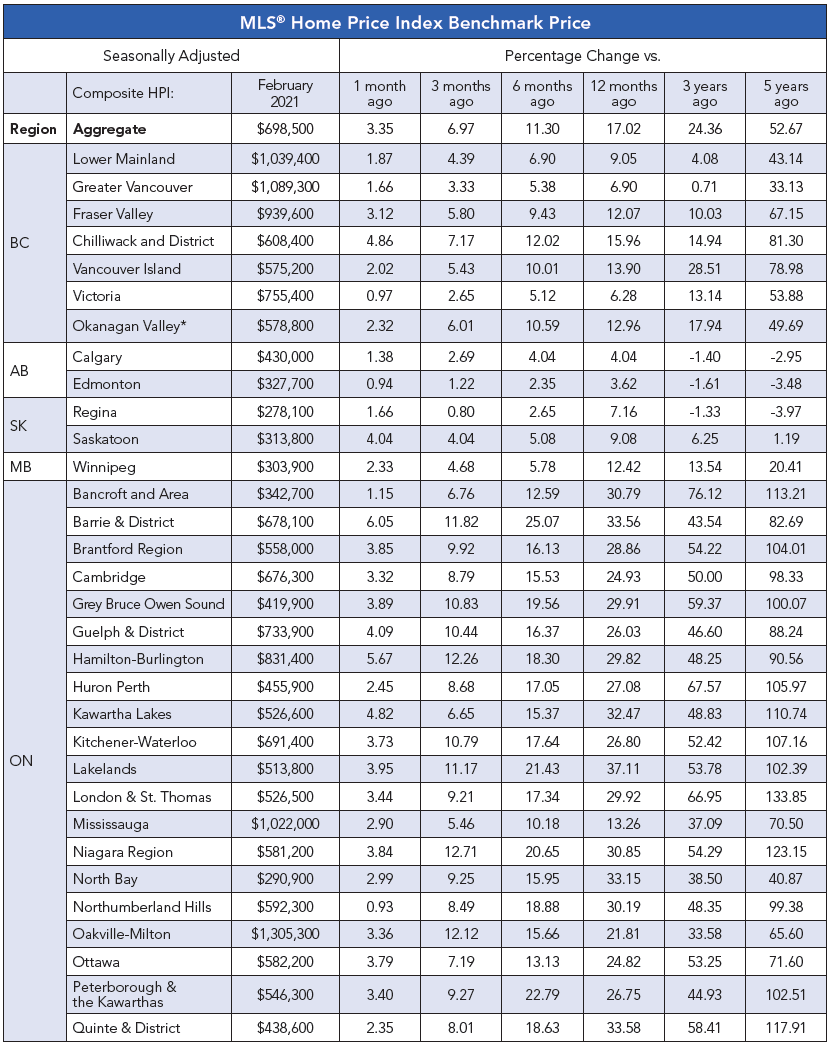 We all know why the housing boom is happening:

On the flip side, there is precious little supply to meet that demand, at least in segments that the market wants.

In a separate release, Canadian housing starts pulled back to 245,900 annualized units in February, a still-high level following a near-record print in the prior month. This is not a winter wonder. Starts on a twelve-month average basis are running at 227k annualized, the strongest such pace since 2008, and over the past six months, starts are averaging 242k, the highest since at least 1990. Both single- and multi-unit starts declined in the month, as did all provinces but British Columbia.