Inflation Surge Is No Need For Hysteria

StatsCanada today reported that consumer price inflation rose to 4.7% from year-ago levels in October, compared to 4.4% in September. This is in line with market expectations and is well below the US’s 6.2% pace reported for the same period. Inflation is rising all over the world, the direct result of extreme weather events and supply chain chaos generated the creaky reopening of economies around the world. With pent-up demand surging, delays in production and transportation have led to price hikes in many sectors. Extreme weather conditions have exacerbated these price pressures, driving up food, energy and other commodity prices. The pandemic and climate change are unprecedented exogenous forces and should not be compared to the inflation surge in the 1970s. Nor should we assume that traditional monetary tightening would ease these pressures unless we are willing to run the risk of recession. 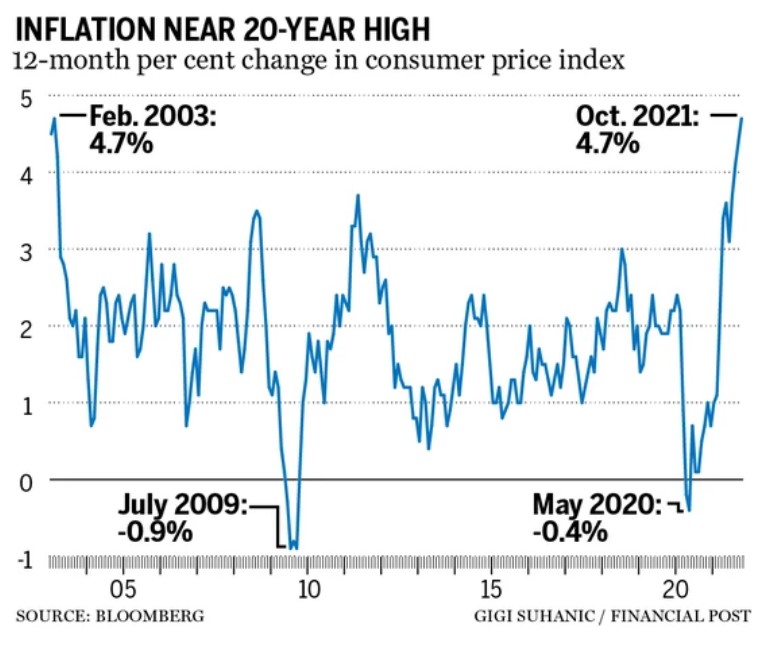 Last month, prices rose in all eight major components on a year-over-year basis, primarily driven by the surge in gasoline prices, which spiked 47.1% from year-ago levels. Extreme drought, especially in China, led to a dearth of hydroelectric power and shortages in other energy sources such as coal and natural gas. The shift to oil for power generation boosts the cost of oil and gasoline. It also caused a domino effect in shortages of other essential materials that require intensive energy use in their production, such as fertilizer and aluminum. These feed into shortages of food and metal components that raise the price of many consumer goods. Combine this with disruptions at the ports, in trucking and on the rail lines. It is no wonder that increasing costs and excess demand are driving up consumer prices worldwide.

The question is, would central bank tightening reduce this kind of inflation. I doubt it. Instead, we are likely to see these pressures ease over time (see chart below). The problem is we have repeatedly underestimated the time it would take to work this all out, leading some to call for a quicker response by the Bank of Canada and the Fed, among other central banks, for fear that the inflation will become embedded.

Embedded inflation, caused by rising wages and inflation expectations, led to wage-price spiralling in the 1970s and early 1980s. In Canada, inflation remained high well into the early 1990s because of substantial federal and provincial budgetary spending. I do not believe we are anywhere near that reality today. To be sure, fiscal policy in response to the pandemic has generated extraordinary budgetary red ink, but price pressures today are not the result of budgetary actions. 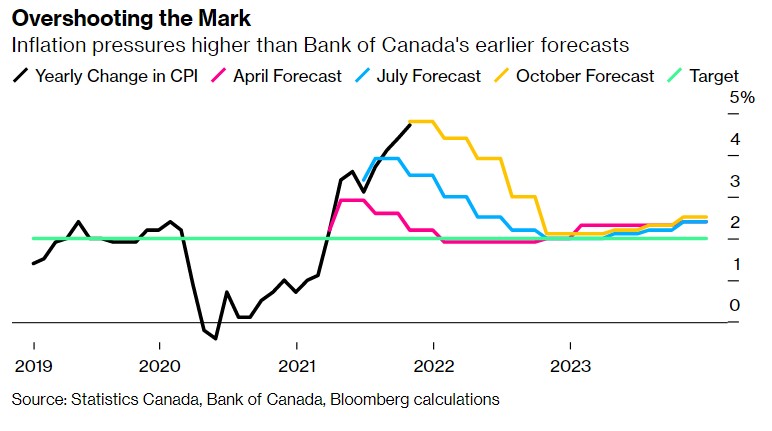 Market-driven interest rates have already surged and are reflected in the rise in fixed mortgage rates. Maintaining a steady overnight rate at its effective lower bound has kept the prime rate and variable mortgage rates stable at extremely low levels. Undoubtedly, these rates will rise in time. The Bank of Canada has been clear that it will occur soon than they initially thought. They are nervous about inflation and are now saying a return to the 2% target will not happen until the end of next year.

Just this week, senior leadership at the Bank has taken to the news waves to suggest we are getting closer to full employment. Traders are now betting that the overnight rate target will rise 1.5 percentage points in 2022, beginning in April. Rates will increase, but we are not on the precipice of runaway inflation.