Canadian Inflation Surged to 8.1% in June

Another bad inflation number was posted today. The rate of consumer inflation continued to rise, reaching 8.1% year over year (y/y) in June, following the 7.7% gain in May. The increase was the largest yearly change since January 1983. The acceleration in June was mainly due to higher prices for gasoline; however, price increases remained broad-based, with seven of eight major components rising by 3% or more.

Excluding gasoline, the CPI rose 6.5% year over year in June, following a 6.3% increase in May (see chart below).

On average, prices rose faster than hourly wages, which increased 5.2% from 12 months to June, based on the Labour Force Survey data.

Gasoline prices are highly visible and have surged a whopping 54.6% y/y. That compares to a 48% increase in May. There might be some reprieve in this component of inflation, as gas prices largely follow crude oil prices, which peaked in early June and have trended downward so far in July. This would be welcome news for the Bank of Canada. 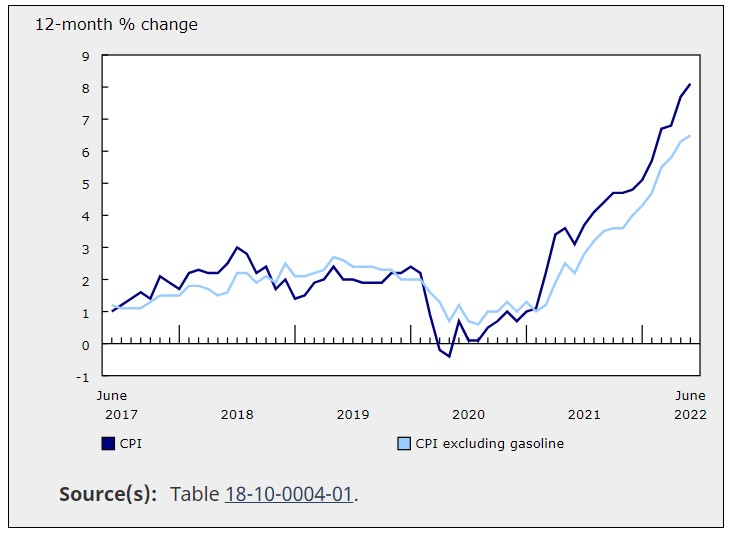 All central banks worldwide (except Japan) face much more than expected inflation. The rise in the annual pace of inflation past the 8% mark will keep the Bank of Canada on its tightening path, though the numbers show some evidence of softening. For example, food prices appear to be easing, and gasoline price inflation may have peaked. Food prices were up 0.1% in June, the slowest increase in a year. Shelter costs gained 0.4%, the smallest increase since November. Statistics Canada said that reflects lower real estate commissions as the housing market slowed.

With some luck, price pressures might be peaking. The chart below shows the Bank of Canada’s most recent forecast for inflation published last week in the July Monetary Policy Report. The Bank of Canada estimated inflation would average about 8% through the third quarter of 2022 before slowing.

According to the swaps market, traders are betting that the central Bank will hike its policy interest rate another 75 basis points on September 7 when it meets again, after the full percentage point increase last week. That would take the overnight rate from 2.5% current to 3.25%–above the Bank’s estimate of the neutral range. It would also push up the prime rate from 4.7% to 5.45%, leading to a 75 bps hike in variable rate mortgages. Last week’s action already took variable mortgage rates to roughly 4.25%, which increased the qualifying rate on such loans to 6.25%–above the 5.25% rate before the move. As a result, the gap between the qualifying rate for fixed-rate mortgage loans and variable-rate loans has fallen to only about 100 bps, its lowest level in years. This undoubtedly continues to slow housing activity, reducing economic growth in Canada.

The question remains–will the Bank of Canada successfully reduce inflation without triggering a recession? Stay tuned. 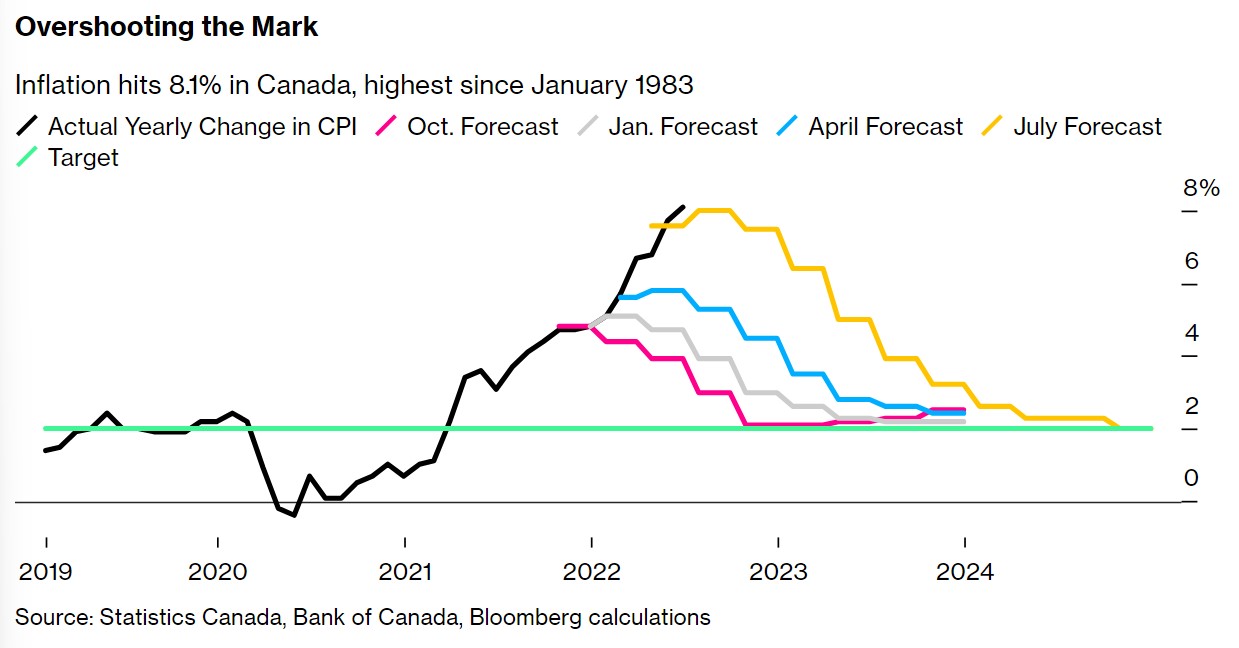