Canadian Inflation Too Hot For Comfort in September

Bank of Canada Will Not Be Happy With This Inflation Report

Canada’s headline inflation rate ticked down slightly last month to 6.9%, but measures of core inflation remain stubbornly high, and food prices hit a 41-year high. Lower gasoline prices were primarily responsible for the decline in inflation in the past three months. Bond markets sold off on the immediate release of the data this morning, taking the 2-year yield on Government of Canada bonds to over 4%. This is the last major data release before the Bank of Canada’s policy rate announcement next Wednesday, October 26, which puts the potential for a 75-bps hike back in play. At the very least, the Bank will take the overnight rate up 50 bps to 3.75%, but I wouldn’t rule out another 75-bps move. Judging from experience, we may see a nod in that direction by Governor Macklem before the Governing Council meets.

Excluding food and energy, prices rose 5.4% year-over-year (y/y) in September, following a gain of 5.3% in August. Prices for durable goods, such as furniture and passenger vehicles, grew faster in September compared with August. In September, the Mortgage Interest Cost Index continued to put upward pressure on the all-items CPI Canadians renewed or initiated mortgages at higher interest rates.

Monthly, the CPI rose 0.1% in September. On a seasonally adjusted monthly basis, the CPI was up 0.4%.

Average hourly wages rose 5.2% on a year-over-year basis in September, meaning that, on average, prices rose faster than wages. The gap in September was larger compared with August.

Contributing to price increases for food and beverages were unfavourable weather, higher prices for essential inputs such as fertilizer and natural gas, and geopolitical instability stemming from Russia’s invasion of Ukraine. 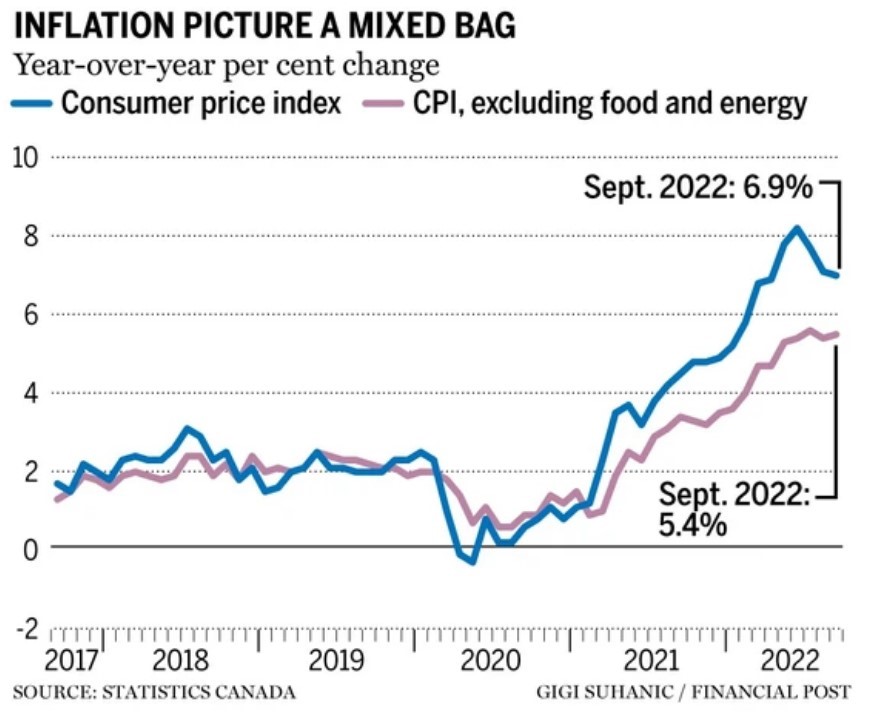 Price pressures might have peaked, but today’s data release will not be welcome news for the Bank of Canada. There is no evidence that core inflation is moderating despite the housing and consumer spending slowdown. The average of the Bank’s favourite measure of core inflation remains stuck at 5.3%. Combined with the Governor’s recent harsh rhetoric, the high probability that the Fed will hike rates 75 bps at the next Federal Open Market Committee Meeting and the weak Canadian dollar, there is no doubt the Bank will increase their overnight policy target to at least 3.75%, and could well go the full 75 bps to 4.0% next week. I would bet that they will not quit there, with further hikes to come in December and next year by central banks worldwide.

The Government of Canada yield curve is now steeply inverted, reflecting the widely held expectation that the economy is slowing. The prime rate will increase sharply next week, increasing variable mortgage rates again. Fixed mortgage rates will rise as well, but not by as much, continuing a pattern we’ve seen since March when the Bank of Canada began the current tightening cycle. We are unlikely to see a pivot to lower rates in the next year as inflation pressures remain very sticky