Canada’s headline inflation rate cooled again in August, even a bit more than expected. The consumer price index rose 7.0% from a year ago, down from 7.6% in July and a forty-year high of 8.1% in June, mainly on the back of lower gasoline prices.

The CPI fell 0.3% in August, the most significant monthly decline since the early months of the COVID-19 pandemic. On a seasonally adjusted monthly basis, the CPI was up 0.1%, the smallest gain since December 2020. The monthly gas price decline in August compared with July mainly stemmed from higher global production by oil-producing countries. According to data from Natural Resources Canada, refining margins also fell from higher levels in July.Transportation (+10.3%) and shelter (+6.6%) prices drove the deceleration in consumer prices in August. Moderating the slowing in prices were sustained higher prices for groceries, as prices for food purchased from stores (+10.8%) rose at the fastest pace since August 1981 (+11.9%).

Price growth for goods and services both slowed on a year-over-year basis in August. As non-durable goods (+10.8%) decelerated due to lower prices at the pump, services associated with travel and shelter services contributed the most to the slowdown in service prices (+5.5%). Prices for durable goods (+6.0%), such as passenger vehicles and appliances, also cooled in August.

In August, the average hourly wages rose 5.4% on a year-over-year basis, meaning that, on average, prices rose faster than wages. Although Canadians experienced a decline in purchasing power, the gap was smaller than in July.

Core inflation–which excludes food and energy prices–also decelerated but remains far too high for the Bank of Canada’s comfort.  The central bank analyzes three measures of core inflation (see the chart below). The average of the central bank’s three key measures dropped to 5.23% from a revised 5.43% in July, a record high. The Bank aims to return these measures to their 2% target. 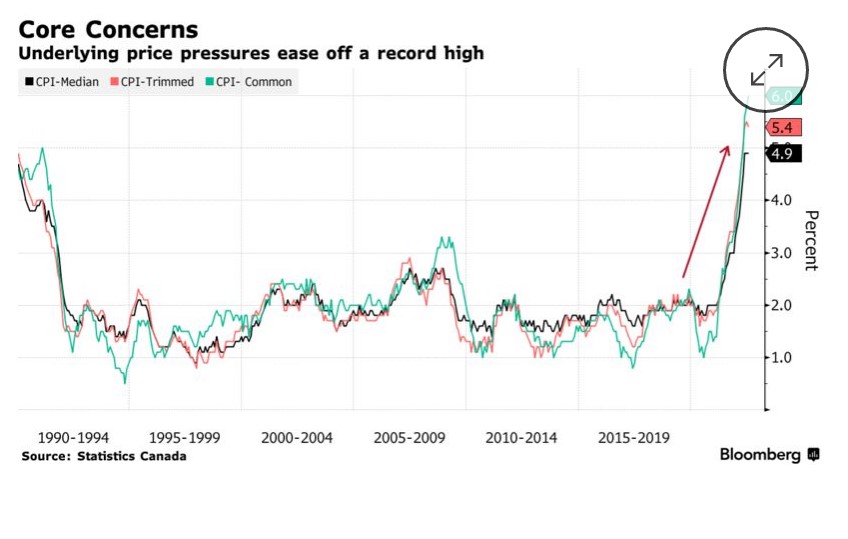 Price pressures might have peaked, but today’s data release will not derail the central bank’s intention to raise rates further. Markets expect another rate hike in late October when the Governing Council of the Bank of Canada meets again. But further moves are likely to be smaller than the 75 bps-hikes of the past summer.

There is still more than a month of data before the October 25th decision date. The September employment report (released on October 7) and the September CPI (October 19) will be critical to the Bank’s decision. Right now, we expect a 50-bps hike next month.