Canada’s labour market continued its recovery in July as health restrictions were lifted, but the gains were shy of expectations. The report signals the economic rebound is intact and shows companies are finding workers as pandemic restrictions vanish. The smaller-than-expected increase, though, could cast some doubt on the pace of hiring. The gains last month were largely in full-time private-sector employment, particularly among youth and women.

The unemployment rate fell 0.3 percentage points to 7.5%, matching the post-February 2020 low hit earlier this year.Employment growth in July was almost entirely in Ontario. Youth aged 15 to 24 and core-aged women aged 25 to 54 accounted for the bulk of gains in the month. Women were hardest hit by the pandemic’s loss of childcare/schooling, so the make-up of employment gains will likely be skewed towards them.

Self-employment was little changed in July and was down 7.1% (-205,000) compared with February 2020. The number of self-employed workers has seen virtually no growth since the onset of the pandemic.

The number of employees in the public sector fell by 31,000 (-0.7%) in July, the first decline since April 2020. Nearly half of the monthly decrease was in Quebec (-15,000; -1.5%) and was partly due to a larger-than-usual summer decrease in the number of educational services workers. Despite this decline, public sector employment at the national level was up 150,000 (+3.8%) compared with February 2020.

Lastly, total hours worked improved by a robust 1.3% in July, but it is still 2.7% below its pre-pandemic level.

The Canadian jobs report coincided with the release on Friday of surprisingly strong U.S. payroll numbers, where 943,000 positions were added last month. 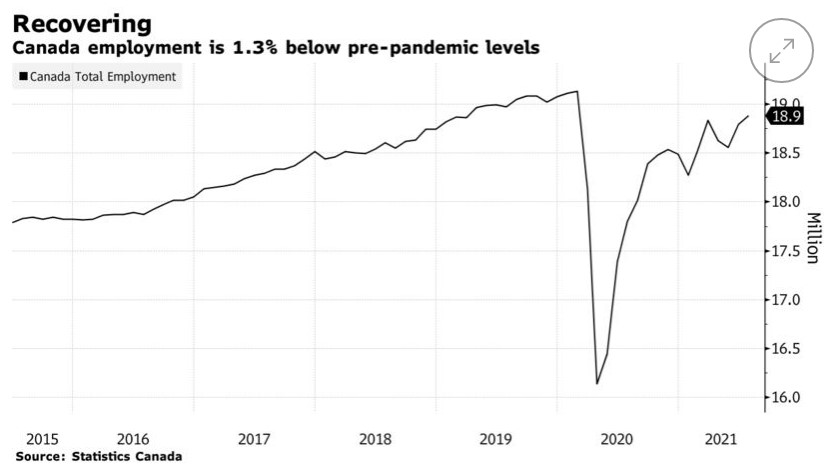 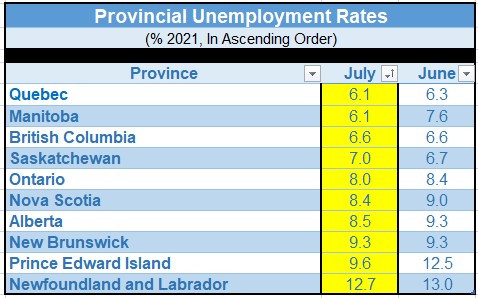 According to the Bank of Canada, employment will need to surpass pre-pandemic levels before complete recovery is declared because the population has grown since the start of the crisis.

July was another solid month for the Canadian labour market as the loosening of public health restrictions across the country spurred hiring activity. That said, capacity limits and travel restrictions held back high-touch businesses from operating at full capacity, limiting job gains in July.

Indeed, employment in high-touch services is still well below pre-pandemic levels. Even with gains in July, accommodation and food services employment was nearly 20% below its February 2020 level. It’s important to note that July’s labour survey was taken during the week of July 11th, and restrictions in some provinces were loosened at the end of that week. So, we could see the recovery continue to strengthen in August.

There are growing headwinds, however. Concerns around the Delta variant are rising, and some countries, harder hit by the virus, are re-imposing restrictions. Canada has not yet been compelled to do so due to low hospitalization levels, but cases are rising. While the impressive vaccination drive should keep hospitalization rates low, health worries could dent consumer and business confidence. Indeed, the economy’s path forward will be closely linked to the evolution of the pandemic.