Statistics Canada released data today that showed a moderate 11.2k gain in employment, but also a falling labour force, which was down 18.2k. In consequence, the jobless rate fell back to 5.8% in October, matching a four-decade low. This is consistent with just under 2% economic growth as the Bank of Canada expects. This modest gain in employment suggests the Bank will hold interest rates steady in December, especially given that wage gains have slowed for the fifth consecutive month.

Continuing the see-saw pattern of late, full-time employment was in the driver’s seat, with 33.9k net positions added. Part-time work fell 22.6k. The overall gains were driven by the private sector (+20.3k) as public sector employment pulled back (-30.8k), leaving a 21.8k gain in self-employment.

These indicators are consistent with business surveys that are getting louder in their complaints that it’s difficult to find workers. But there is little evidence that firms are offering better pay to attract and retain employees. Wages were up 2.2% from a year ago, the slowest pace in more than a year and down from as high as 3.9% earlier this year. Wage gains for permanent workers were 1.9%, also the slowest in more than a year. This reduces the likelihood of a rate hike in December. The Bank of Canada’s wage common measure has been more stable at 2.3% so far this year. This is a better indicator of the underlying trend, but no doubt it’s still short of what we would expect at this point in the cycle.

On a regional basis, employment rose slightly in Saskatchewan, while there was little change in all the other provinces (see table below).

More people were employed in business, building and other support services; wholesale and retail trade; and health care and social assistance. In contrast, there were fewer workers in “other services;” finance, insurance, real estate, rental and leasing; and natural resources. Employment in finance, insurance, real estate, rental and leasing declined by 15,000 in October, offsetting an increase the month before. On a year-over-year basis, employment in the industry was little changed as housing starts, and resales have slowed, especially in B.C. and Ontario.

Bottom Line: Income growth will be crucial in enabling households to manage debt loads in a rising rate environment and by extension a key determinant of the pace of future Bank of Canada interest rate hikes. Today’s jobs report along with other less timely data suggest the Bank of Canada will refrain from raising interest rates in December. 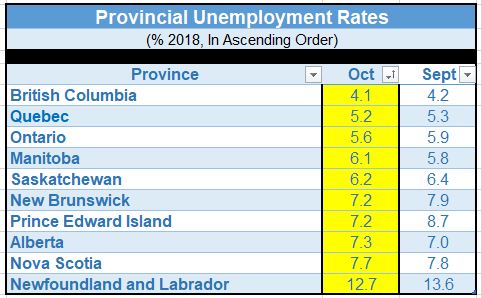 Hiring rebounded sharply last month in the US as non-farm payrolls added 250k new jobs, compared to 118k in September, which was restrained by disruption from Hurricane Florence. The unemployment rate held at its cycle-low 3.7%.

The closely watched measure of wage growth–average hourly earnings– rose 0.2% on the month. On a year-over-year basis, wages in the US were up 3.1%, a new post-recession high.

This is an unambiguously positive report. Hiring bounced back from a hurricane-dampened September. The number of Americans with jobs relative to the population reached a new post-recession high. And, perhaps most notably, wages continue to make progress.

With the Fed just having moved in September, we are not anticipating another hike at next week’s FOMC meeting as the central bank adheres to a gradual pace of tightening. However, our forecast does anticipate a 25-basis point increase at the next policy meeting in December followed by similar-sized hikes every quarter through next year. This results in the upper end of the fed funds rate range finishing 2019 at 3.50% compared to 2.25% currently.