Housing affordability remains a huge political issue and with the Department of Finance working on the upcoming budget, no doubt measures to reduce home prices will be front and center. What we desperately need is dramatic increases in new housing construction, which has been woefully constrained by local zoning and city planning issues. These are not under the auspices of the federal government. So instead, bandaid measures that do not directly address the fundamental issue of a housing shortage will likely be forthcoming. More on that below.

Small gains in home sales in November and December followed a 9% surge in activity in October, placing sales in the final quarter of 2021between the highs and lows seen earlier and the year (see chart below).With the exception of month-over-month sales gains in Calgary and the Fraser Valley, most other large markets mirrored the national trend of little change between November and December. The actual (not seasonally adjusted) number of transactions in December 2021 came in 9.9% below the record for that month set in 2020. That said, as has been the case throughout the second half of 2021, it was still the second-highest level on record for the month.

On an annual basis, a total of 666,995 residential properties traded hands via Canadian MLS® Systems in 2021. This was a new record by a large margin, surpassing the previous annual record set in 2020 by a little more than 20%, and standing 30% above the average of the last 10 years. 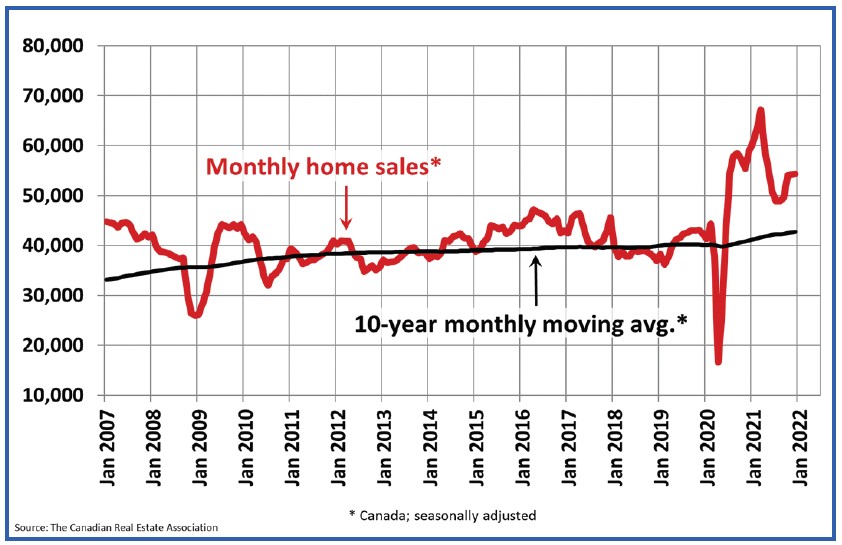 The number of newly listed homes fell 3.2% in December compared to November, with declines in Greater Vancouver, Montreal and a number of other areas in Quebec more than offsetting an increase in new supply in the GTA.

There were just 1.6 months of inventory on a national basis at the end of December 2021 — the lowest level ever recorded. The long-term average for this measure is a little more than 5 months. 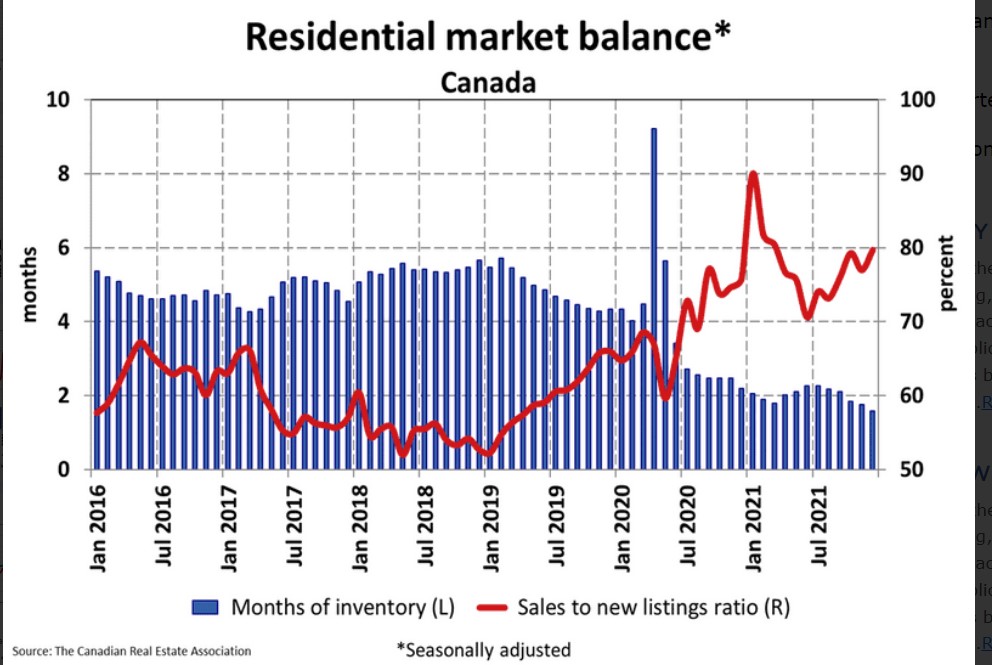 In line with the tightest market conditions ever recorded, the Aggregate Composite MLS® Home Price Index (MLS® HPI) was up another 2.5% on a month-over-month basis in December 2021.

The non-seasonally adjusted Aggregate Composite MLS® HPI was up by a record 26.6% on a year-over-year basis in December.

Looking across the country, year-over-year price growth has crept back above 25% in B.C., though it remains lower in Vancouver, close to on par with the provincial number in Victoria, and higher in other parts of the province.

Year-over-year price gains are still in the mid-to-high single digits in Alberta and Saskatchewan, while gains are running at about 12% in Manitoba.

Ontario saw year-over-year price growth remain above 30% in December, with the GTA continuing to surge ahead after trailing other parts of the province for most of the pandemic.

Greater Montreal’s year-over-year price growth remains at a little over 20%, while Quebec City was only about half that.

Price growth is running above 30% in New Brunswick (higher in Greater Moncton, lower in Fredericton and Saint John), while Newfoundland and Labrador is now at 11% year-over-year. 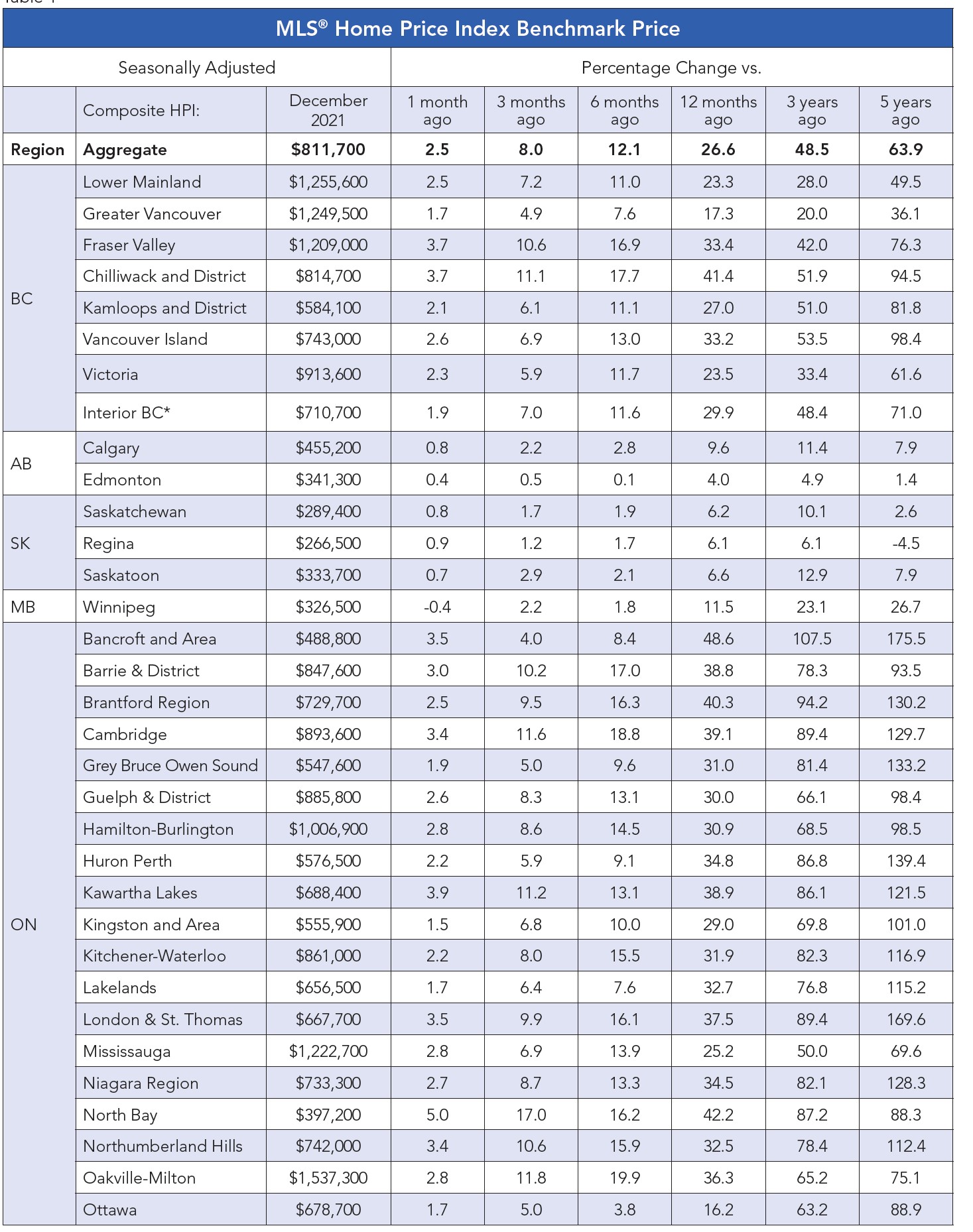 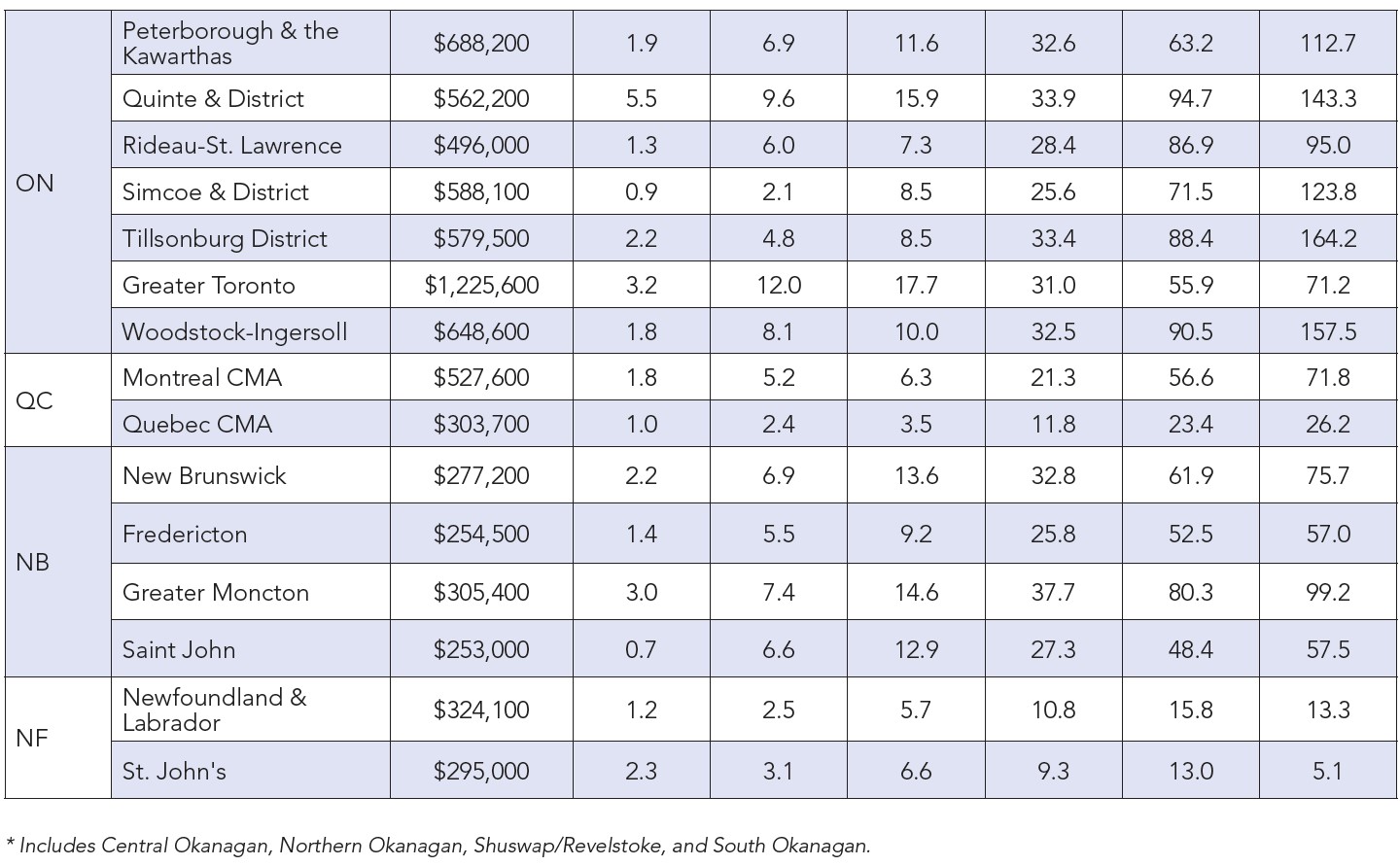 Bottom Line–We Are In The Political Season

The Bank of Canada conducted a recent study of residential mortgage originations at federally regulated financial institutions since 2014 to determine the share and financial characteristics of mortgage-financed homebuying by type of purchaser: first-time homebuyers; repeat buyers (the so-called move-up market); and investors.

First-time homebuyers are the largest group, generally accounting for roughly half of all mortgage purchases since 2014. Repeat homebuyers (those that discharged their previous mortgage when they took a new mortgage) comprised 31% of all mortgaged buyers over the same period. Investors having multiple mortgages represent 19% of purchases since 2014. Investors without mortgages are not included in the data, so foreign investors who might have borrowed money outside of Canada are not included.

The chart below shows that since 2015, the share of first-time homebuyers has fallen from over 52% to less than 48% of all mortgaged homebuying, while the share of repeat buyers is up slightly, and the share of investors has risen from under 18% to over 20%. Most of the rise in investor activity was in 2017 and 2021.

The Bank of Canada concludes that the increased presence of investors in the housing market has augmented demand and “may reflect a belief that house prices will continue to rise in value…By exacerbating so-called boom-bust cycles in housing markets, investors could thus be a source of instability for the financial system and the economy more broadly. At the same time, investors are an important source of housing rental supply. We need to do further research to examine the delicate balance between adding to rental supply while removing new builds and resale supply in a housing market that already has supply constraints.”

The Ministry of Housing and Diversity and Inclusion, in partnership with the Canada Mortgage and Housing Corporation (CMHC), according to a Financial Post article dated January 12, is concerned about “speculative investing” in housing, “prompting Canadians to overbid on properties, borrow beyond what they can afford, and push home prices even higher.”

It looks like the Feds may well raise the minimum downpayments on investment property loans. They are also considering a limitation on the sources of funding for these properties.

What the Canadian housing market needs is substantial new affordable housing construction. Impeding this is the long and tortuous planning process and local government zoning rules. Actions taken to reduce housing demand in the face of nearly a million new immigrants coming to Canada in 2021 and 2022, if severe enough, could throw the whole economy into recession, particularly given that the Bank of Canada is on the precipice of hiking interest rates. The wealth and liquidity of millions of Canadian households are tied up in housing, so the government must take care not to push demand restrictions too far, especially since condo investments augment the very tight rental markets. 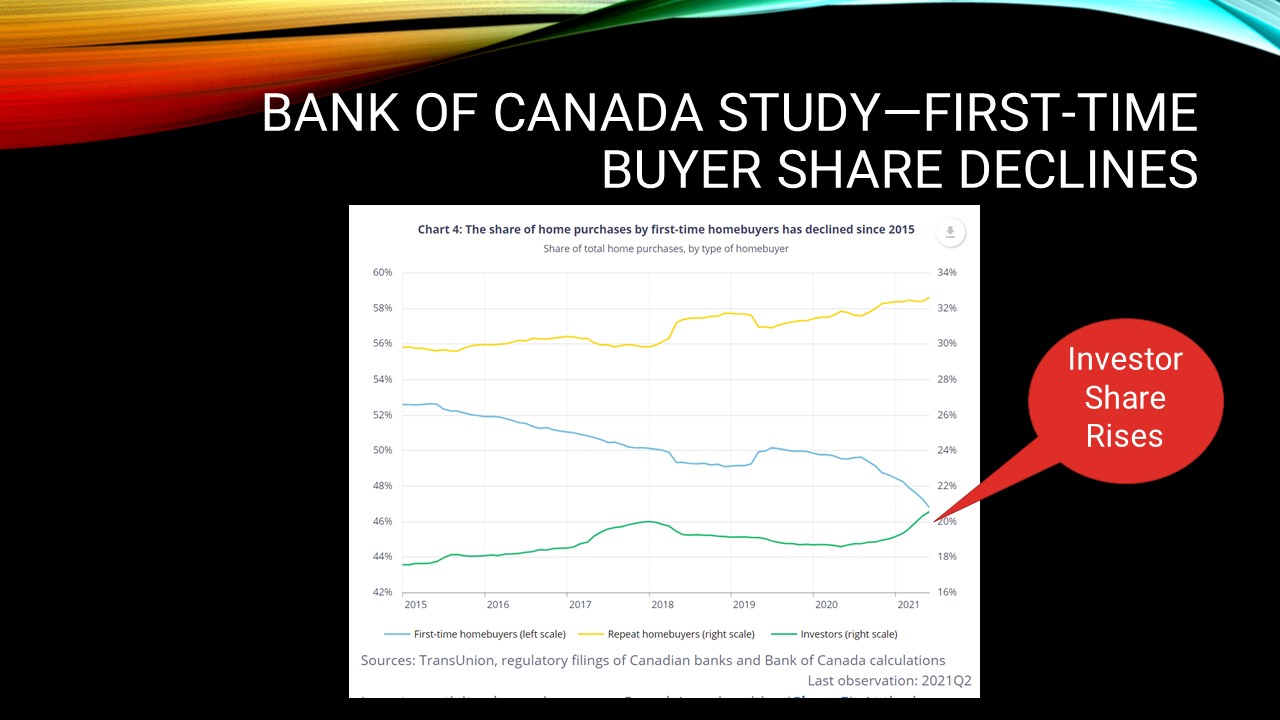