This morning, Statistics Canada provided us with some much-needed good news on the economic front following last week’s surprisingly dismal Q2 GDP report. Canada’s labour market continued its recovery in August, especially in the hardest-hit food services and accommodation sectors. The August Labour Force Survey (LFS) data reflect conditions during the week of August 15 to 21. By then, most regions of Canada had lifted many of the Covid-related restrictions. However, there were capacity restrictions in such indoor locations as restaurants, gyms, retail stores and entertainment venues. Also, for the first time since March 2020, border restrictions were lifted for fully vaccinated non-essential travellers from the US.

However, the reopening of the Canadian economy has been creeky, owing to supply constraints and difficulty in filling job vacancies in sectors that require high-contact interfaces, especially with the concern regarding a fourth wave of the delta variant. Nevertheless, today’s LFS indicated that employment grew last month by 90,200, the third consecutive monthly gain, further closing the pandemic gap. Employment is now within 156,000 (-0.8%) of its February level, the closest since the onset of the pandemic. Moreover, most of the net new jobs were in full-time work. Increases were mainly in the service sector, led by accommodation and food services. 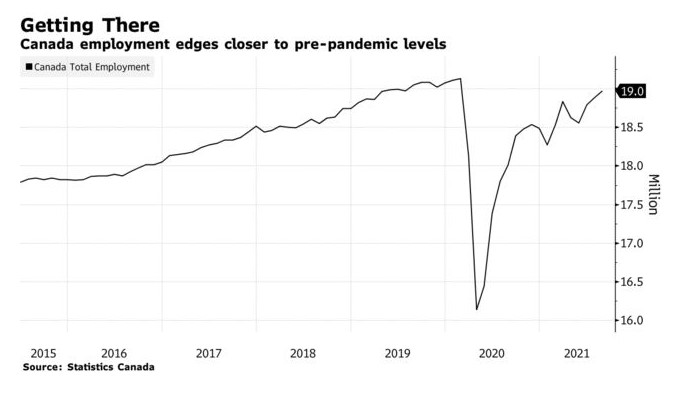 The jobless rate fell from 7.5% in July to 7.1% in August. The unemployment rate peaked at 13.7% in May 2020 and has trended downward since, despite some short-term increases during the fall of 2020 and spring of 2021. In the months leading up to the pandemic, the unemployment rate had hovered around historic lows and was 5.7% in February 2020.

The adjusted unemployment rate—which includes discouraged workers–those who wanted a job but did not look for one—was 9.1% in August, down 0.4 percentage points from one month earlier.

Employment increased in Ontario, Alberta, Saskatchewan and Nova Scotia in August. All other provinces recorded little or no change. For the third consecutive month, British Columbia was the lone province with employment above its pre-pandemic level. Compared with February 2020, the employment gap was largest in Prince Edward Island (-3.4%) and New Brunswick (-2.7%). The table below shows the jobless rates by province. 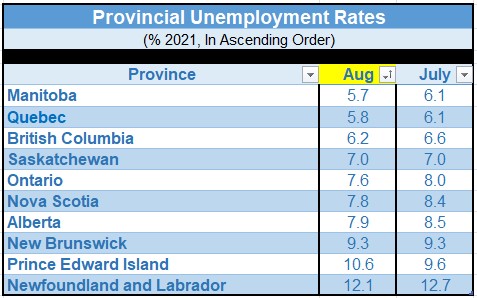 The Bank of Canada this week once again suggested that it would not begin to tighten monetary policy until the economy returned to full capacity utilization, which they estimate will not be until at least the second half of next year. Employment will need to surpass pre-pandemic levels before complete recovery is declared because the population had grown since the start of the crisis 18 months ago.

Although August was another solid month for the jobs market, there is a wide disparity across sectors of the job market in the degree to which they have recovered from the effects of the pandemic. The table below shows the employment change in percentage terms by sector compared with February 2020.

Sectors where remote work has been widespread–such as professional, scientific and technical services, public administration, finance, insurance and real estate–have seen a net gain in employment. However, in high-touch sectors that were deemed nonessential, the jobs recovery has been far more constrained. This is especially true in agriculture, accommodation and food services, and recreation. 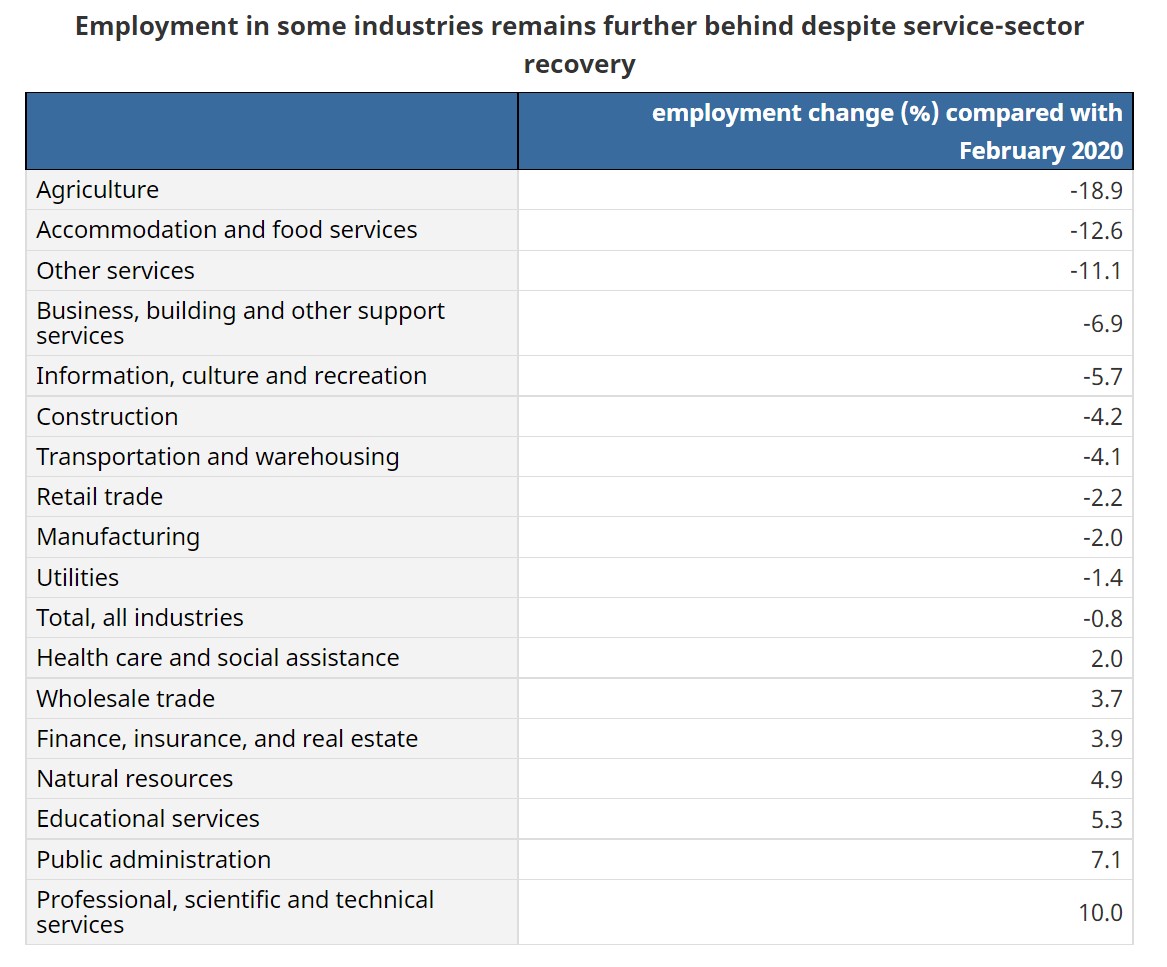