The number of homes sold across the country rose 5.2% on a seasonally adjusted basis. The actual (not seasonally adjusted) activity was up 76.2% year-over-year (y-o-y). The 76,259 houses that sold were 14,000 more than the previous monthly sales record set last July. The number of newly listed properties jumped another 7.5% from February to March. Benchmark home prices rose 3.1% from the previous month and were up 20.1% y-o-y.

The month-over-month increase in national sales activity from February to March was broad-based and generally in line with locations where more new listings became available. Sales gains were largest in March in Greater Vancouver, Calgary, Edmonton, Hamilton-Burlington and Ottawa.

“Seeing how many homes were bought and sold in March 2021, one could be forgiven for thinking the market just continues to strengthen, and maybe to some extent it is,” stated Cliff Stevenson, Chair of CREA. “The real issue is not strength in housing markets but imbalance. That demand has been around for months, but with the shortages in supply we have across so much of Canada, a lot of that demand has been pressuring prices. So the big rebound in new supply to start the spring market is the relief valve we need the most to get that demand playing out more on the sales side of things and less on the price side. That said, it will take a lot more than one month of record new listings, but it looks like we may finally be rounding the corner on these extremely unbalanced housing market conditions. It’s great news for frustrated buyers…”

“We spent a lot of time over the last year talking about pent-up demand, but I think now is a good time to talk about pent-up supply, which may be the answer to the question everyone is asking right now,” said Shaun Cathcart, CREA’s Senior Economist. “2020 was the year that home became everything, so in hindsight it’s not that surprising that so many people who did not have one in which to ride out the pandemic really wanted one, while so many of those who did have a home to hunker down in were not inclined to give it up. Then, it stands to reason that as the uncertainty caused and the danger posed by COVID wind down, some owners who would not sell during a global pandemic will emerge with properties for sale. At the same time, some of the urgency on the demand side could dissipate. We’ll only know in the fullness of time, but March certainly did nothing to disprove the idea. That said, the third wave of COVID-19 could throw a wrench into the works of a potential supply recovery this spring.” 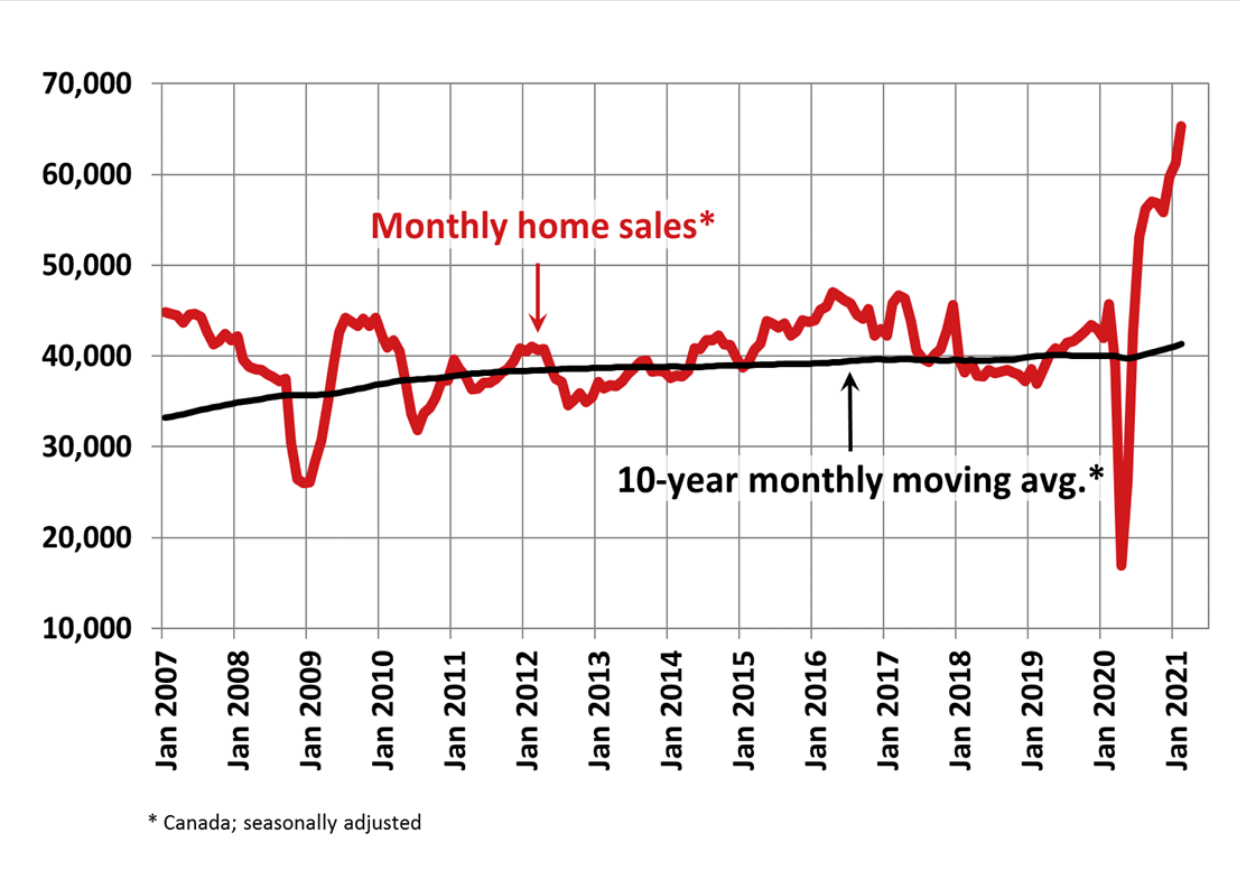 The number of newly listed homes climbed a further 7.5% to set a new record in March. With February’s big rebound, new supply is up more than 25% in the last two months.

With the rebound in new supply outpacing recent sales gains, the national sales-to-new listings ratio eased back to 80.5% in March compared to a peak level of 90.9% set in January. The long-term average for the national sales-to-new listings ratio is 54.4%, so it is currently still very high historically. The good news is it appears to be moving in the right direction finally.

Based on a comparison of sales-to-new listings ratio with long-term averages, less than 20% of all local markets were in balanced market territory in March, measured as being within one standard deviation of their long-term average. The other 80%+ of markets were above long-term norms, in many cases well above. The first three months of 2021 and the second half of 2020 have seen record numbers of markets in seller’s market territory. For reference, the pre-COVID record of only around 55% of all markets in seller’s territory was set back at the beginning of 2002.

The number of months of inventory is another important measure of the balance between sales and the supply of listings. It represents how long it would take to liquidate current inventories at the current rate of sales activity. There were only 1.7 months of inventory on a national basis at the end of March 2021 – the lowest reading on record for this measure. The long-term average for this measure is a little over five months.

The Aggregate Composite MLS® Home Price Index (MLS® HPI) climbed by 3.1% m-o-m in March 2021 – similar to but slightly less than the record gain in February.

While price growth remains the largest in the single-family home space, the pace of those gains decelerated in March while price gains in the more affordable townhome and apartment segments continued to pick up steam. Of the 41 markets now tracked by the index, all but one were up on a m-o-m basis.

The non-seasonally adjusted Aggregate Composite MLS® HPI was up 20.1% on a y-o-y basis in March. Based on data back to 2005, this was a record y-o-y increase, surpassing the previous record of 18.6% set back in April 2017.

The largest y-o-y gains continue to be posted across Ontario, followed by markets in B.C., Quebec and New Brunswick, then by single-digit gains in the Prairie provinces and Newfoundland and Labrador.

The actual (not seasonally adjusted) national average home price was a record $716,828 in March 2021, up 31.6% from the same month last year. That said, it is important note that the biggest increase in new supply and thus sales in March was in Greater Vancouver, which raised that market’s share of national activity to its highest level in almost four years.

Detailed home price data by region is reported in the table below. 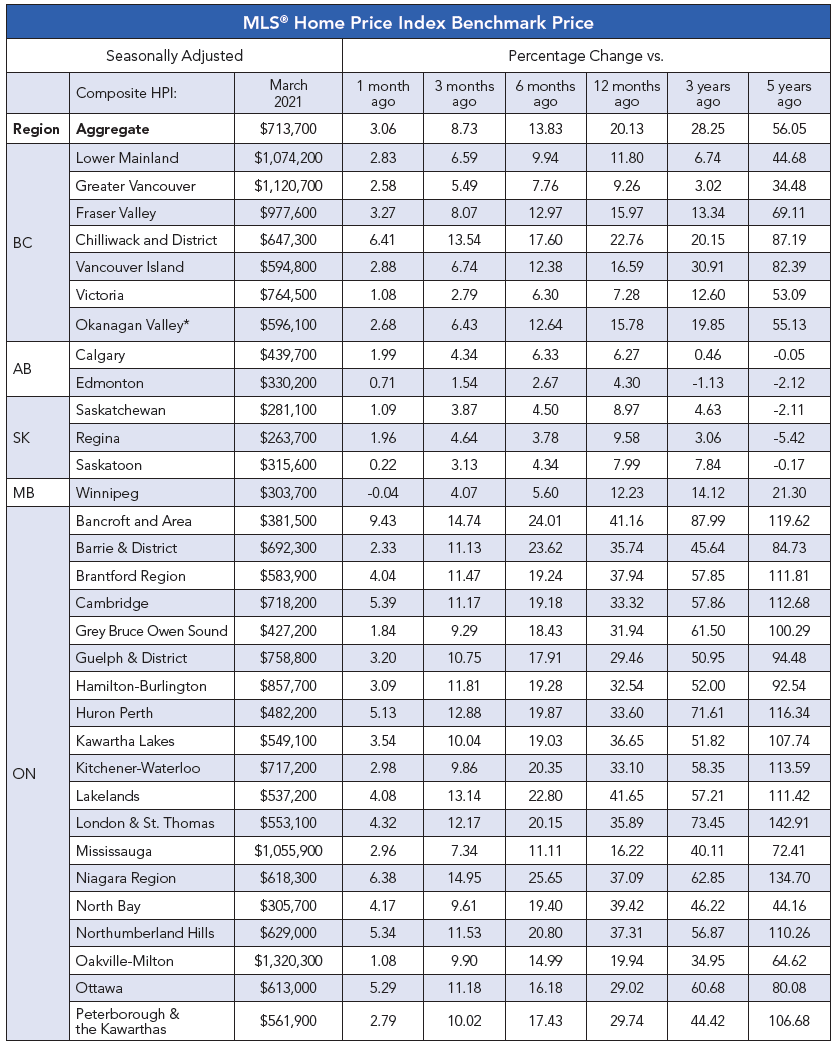 The continued strength in the market comes amid a debate in Canada over whether a housing bubble is building and what policymakers should do about it. Last week, Canada’s banking regulator, OSFI, said it is examining whether to set up a new higher minimum benchmark interest rate of 5.25% to determine whether people qualify for uninsured mortgages, and Prime Minister Justin Trudeau’s government has said it is looking to impose a tax on foreign, non-resident homeowners. Some economists have argued these steps aren’t enough, though March’s increase in supply may ease some of these concerns.

The simplest explanation for why the housing market has been so strong is the dramatic decline in mortgage rates generated by the Bank of Canada’s easing in monetary policy in March 2020 with the onset of the pandemic. The central bank’s policy move did precisely what it was intended to achieve, even though it may now be proving counterproductive. Trying to now halt or temper demand through a myriad of additional complex rules is not only inefficient but also risks unintended consequences.

The dramatic decline in mortgage rates to record low levels boosted the purchasing power of households. Also, many were able to buy further away from expensive cities also easing the burden of home purchases of household expenses. This not only occurred across Canada, but we observed the same phenomenon in many countries around the world. Home price inflation has been greatest the further you go out from city centres.

I agree with Beata Caranci, SVP & Chief Economist of TD Bank when she pointed out that, “Canada already has a number of safety levers in place around household financial risks. In fact, the IMF concluded in January 2020 that Canada’s “macroprudential stance is broadly adequate” and the stance was relatively tight, reflecting the six rounds of tightening mortgage insurance rules by the Department of Finance. Provinces and cities have also enacted measures over the years to discourage speculative activity via taxing vacant properties or upping land transfer taxes.”

Buyers are not irrational when they are concerned about being priced out of a home purchase. For the past thirty years, despite all the hype about housing bubbles in cities like Vancouver and Toronto, residential real estate has been a great investment and far less volatile than alternative uses of funds. This has been boosted by Canada’s immigration policy which has triggered the strongest population growth among the G7 countries. Property taxes and land transfer taxes are already among the highest in the world and, unlike the US, mortgage payments and property taxes are not tax-deductible.

The bulk of the new housing supply has been in multi-unit housing. The pandemic has highlighted the value of a much-coveted single-family home. That has been reflected in the surge in the prices of such homes, which were still affordable in heretofore untapped markets well beyond the major cities. Why shouldn’t today’s dual-income households aspire to the same homeownership dreams their parents fulfilled? Even after this boom in housing, which will no doubt slow as the pandemic ends and interest rates return to more normal levels, delinquency rates on outstanding mortgages will remain low. The guardrails put in place by the series of actions since 2016–reducing amortizations, increasing minimum down payments, and tightening mortgage stress testing requirements–all but guarantee that in the strong economic recovery from the pandemic, credit risks are already sufficiently low.