While central banks hold overnight rates at record lows, anchoring short-term interest rates and the prime rate, mid-to-long-term government yields have been rising since early this month. As the chart below shows, the 5-year Government of Canada bond, upon which mortgage rates are generally tethered, are currently at 0.69%, up 27 basis points since January 29th. This is the highest 5-year yield since late-March 2020.  Canadian bond yields have increased more than in the US, perhaps due to the surge in commodity prices, most notably oil, which has climbed 16.9% in just the past month, taking the year-to-date gain to 27%.

Growing government debt arising from fiscal measures to cushion the blow of the pandemic and stimulate the economy has set the stage for higher government bond yields in much of the developed world.

Inflation concerns are mounting. In a rare move, yesterday Statistics Canada revised up its estimate of core inflation–unveiled only five days ago–from 1.5% to 1.77%. The result is an inflation picture that is more elevated than reported last week, at a time when investors are becoming more worried about global price pressures. The core CPI is the Bank of Canada’s preferred measure of underlying inflation, and it has rattled markets that it now appears to be running at nearly a 1.8% year-over-year pace.

While inflation is expected to accelerate in the coming months on higher energy costs, policymakers led by Governor Tiff Macklem see little immediate threat from rising prices, even with extraordinary levels of stimulus coursing through the economy. Despite a temporary pickup early this year, the Bank of Canada doesn’t anticipate inflation will sustainably return to its 2% target until 2023. Macklem speaks in Calgary later today, and he is likely to suggest that the Canadian economy is still far from an inflationary threshold. 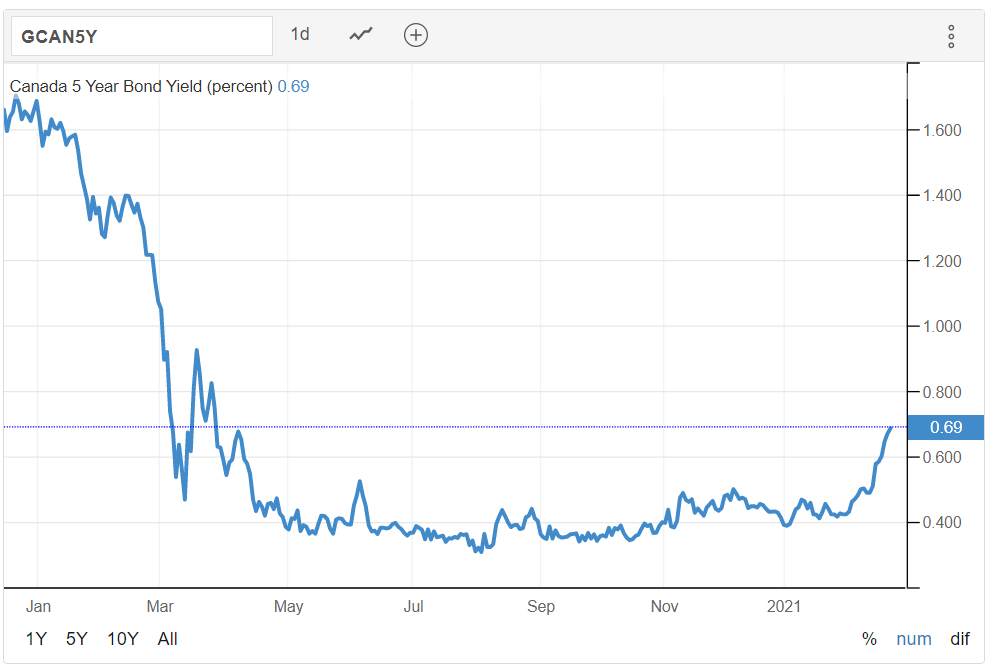 Keep in mind that Canada’s economy has considerable slack with unemployment rising in recent months and the lockdown continuing for at least a couple more weeks in the GTA. Moreover, Canada has fallen far beyond other countries in the vaccine rollout.

The biggest vaccination campaign in history is currently underway. More than 209 million doses have been administered across 92 countries, according to data collected by Bloomberg News. The latest pace was roughly 6.24 million doses a day. Israel has administered more than 82 doses of vaccine per 100 people, the UK is at 27.5, and the US is at 19.3. Canada, on the other hand, has administered only 4.1 doses per 100 people, now ranking 43rd in the world (see chart below).

This slow start to the rollout likely portends a longer period of economic underperformance. 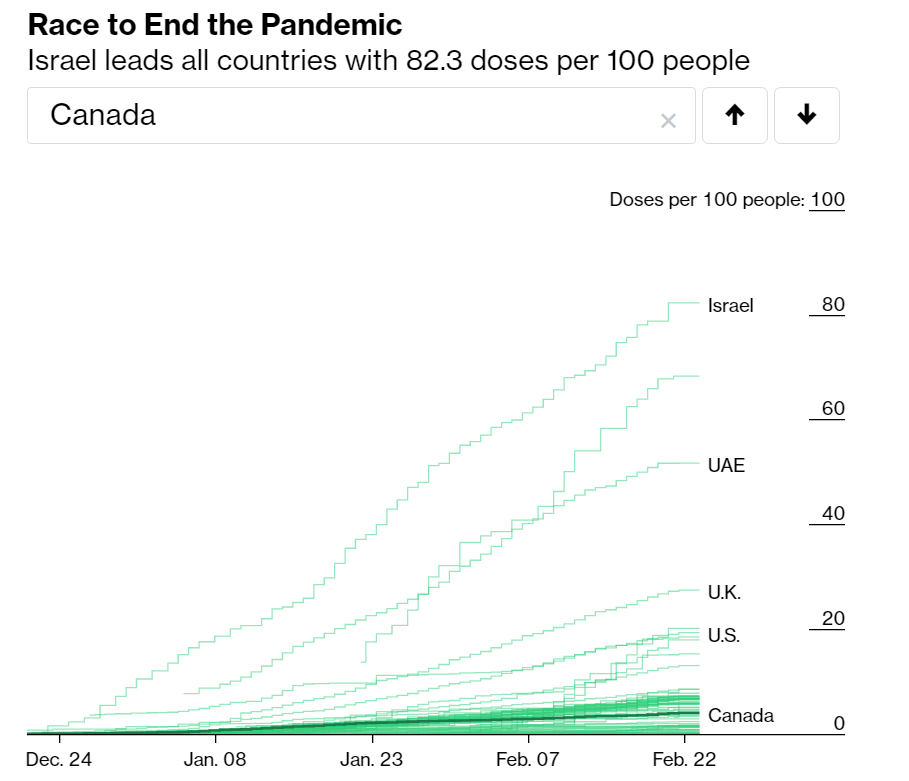 Some upward pressure on fixed mortgage rates might be in store, although the Big Five Banks have yet to respond, and the qualifying rate remains at 4.79%, well above contract rates. Without any prospect of near-term tightening by the Bank of Canada, variable rate mortgage rates–typically tied to the prime rate–will remain stable. But mortgage rates have moved up at some of the non-bank lenders. No question, the economy’s trajectory and interest rates will be linked to the return to the ‘new normal’ following the pandemic. Good news on the pandemic front inevitably means higher mortgage rates in 2022-23–if not sooner.