Bank Will Hike Rates At Next Meeting

While markets were 70% certain the Bank would hike their overnight target rate today, we remained of the view that the Governing Council would hold off until March or April because of the slowdown in first-quarter growth arising from the Omicron restrictions. The Bank announced today that economic slack in the economy had been absorbed more rapidly than expected in late October when they last met. “Employment is above pre-pandemic levels, businesses are having a hard time filling job openings, and wage increases are picking up. Unevenness across sectors remains, the Governing Council judges the economy is now operating close to its full capacity.”

Consequently, the Bank now believes that emergency measures arising from the pandemic are no longer necessary. They clearly state that a rising path for interest rates will be required to moderate domestic spending growth and bring inflation back to target. Being mindful that the increasing spread of Omicron will dampen spending in the first quarter, they decided to keep the policy rate unchanged today and to signal that rates will rise going forward. “The timing and pace of those increases will be guided by the Bank’s commitment to achieving the 2% inflation target.”

Notably, the Bank also suggested that another vital policy measure to reduce demand and thereby control inflation is “quantitative tightening” (Q.T.), reducing the central bank’s holdings of Canadian government bonds on its balance sheet. This selling of bonds also raises interest rates. “The Bank will keep the holdings of Government of Canada bonds on our balance sheet roughly constant at least until we begin to raise the policy interest rate. At that time, we will consider exiting the reinvestment phase and reducing the size of our balance sheet by allowing maturing Government of Canada bonds to roll off. As we have done in the past, before implementing changes to our balance sheet management, we will provide more information on our plans.”

The Bank of Canada is very concerned about maintaining its hard-won inflation-fighting credibility. Remember that while Canadian inflation is at a 30-year high–as it is in the rest of the world–at 4.8%, Canadian inflation pales compared to the 7.0% rate in the U.S. and 6.8% rate in the U.K. (see chart below). It is also below the pace of the Euro area. The Bank stated that “CPI inflation remains well above the target range and core measures of inflation have edged up since October. Persistent supply constraints are feeding through to a broader range of goods prices and, combined with higher food and energy prices, are expected to keep CPI inflation close to 5% in the first half of 2022. As supply shortages diminish, inflation is expected to decline reasonably quickly to about 3% by the end of this year and gradually ease towards the target over the projection period. Near-term inflation expectations have moved up, but longer-run expectations remain anchored on the 2% target. The Bank will use its monetary policy tools to ensure that higher near-term inflation expectations do not become embedded in ongoing inflation.” 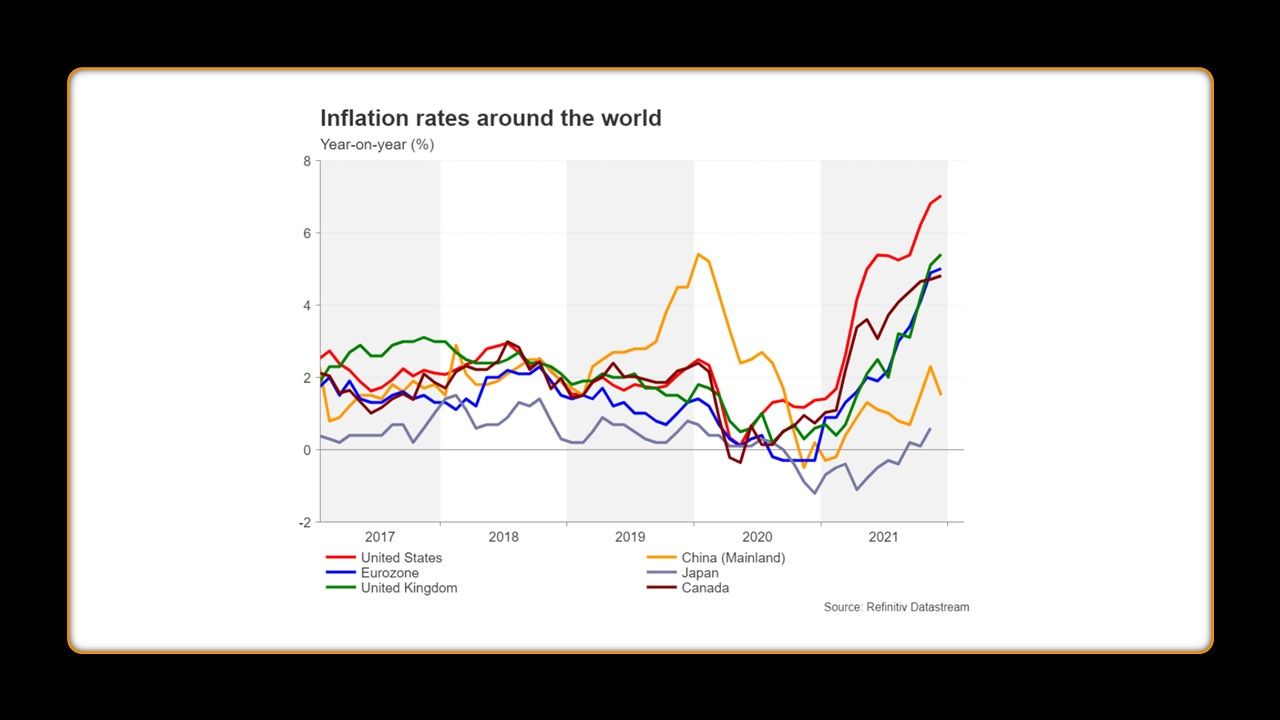 It surprises me that economists in Canada would expect the Bank to hike interest rates during a Covid lockdown without properly measured signalling beforehand. Bay St’s hysteria about inflation seems to have muddied thinking. The Bank will be taking out the big guns to get inflation under control. Overnight rate hikes begin at the next policy meeting on March 2 and then Quantitative Tightening shortly after that. The downsizing of the Bank’s balance could have even more dramatic effects on the shape of the yield curve, hiking longer-term interest rates.

In today’s policy statement and Monetary Policy Report, the Bank emphasized the strength of the housing market and the impact on inflation of the more than 20% rise in Canadian house prices last year. The MPR suggests that housing market activity strengthened again in recent months, led by a rebound in existing home sales.”Low borrowing rates and high disposable incomes continue to contribute to elevated levels of housing activity in the first quarter. At the same time, other factors that support demand, such as population growth, are also now picking up.”

Traders continue to bet that the Bank of Canada will hike interest rates by 25 basis points five or six times this year. This would take the overnight rate from 0.25% to 1.5% to 1.75%. It was 1.75% in February of 2020 before the pandemic easing began. Markets also expect two more rate hikes in 2023, taking the overnight rate to 2.25%.

Volatility in financial markets has surged this year. The FOMC, the US policy-making body, announces its decision at 2 PM ET today. No rate hike is expected yet, but the Fed will undoubtedly commit to serious rate hikes and balance sheet contraction in the coming months.