The Canadian economy rebounded sharply in the third quarter, posting its most rapid expansion ever. Still, it was a lower than expected gain, and early data show that momentum is quickly fading in the face of a second wave of the pandemic.

Gross domestic product rose by a massive 40.5% annual rate in Q3, reversing much of the historic 38.1% plunge in Q2 (revised from -37.8%). No matter how impressive the Q3 bounce was, it fell short of well-telegraphed expectations—even yesterday’s Fall Fiscal Statement assumed a 47.5% surge, reflecting the widespread reopening of the economy. Still, thanks to the magic of upward revisions to prior quarters (stretching back years), it appears that the economy is headed for roughly an annual decline of about 5.7% this year. The rebound brings total output to 95% of pre-pandemic levels.

With the huge second wave in COVID cases, renewed restrictions have been implemented across the country in recent weeks, assuring that the Q3 rebound has stalled in the fourth quarter. Today’s news that September’s monthly GDP growth was a solid +0.8% and October’s first estimate is +0.2% is moderately encouraging. Even so, economic activity is likely to flatten in November and decline in December, holding Q4 growth to a 0-to- 2% annual pace.

The big bounce in Q3 left GDP down 5.2% from a year ago for the quarter. But the gain in October brings the latest monthly tally to down less than 4% y/y.

As shown in the table below, the big “miss” in Q3 GDP growth was mostly attributed to the decline in inventories. Otherwise, the picture was one of a massive snap-back in activity from the spring shutdowns. There were triple-digit annualized rebounds in housing, capital spending on machinery & equipment, and imports. Housing grew at a record 187.3% q/q annual rate, the strongest component of the economy. Housing was also up 9.5% year-over-year. 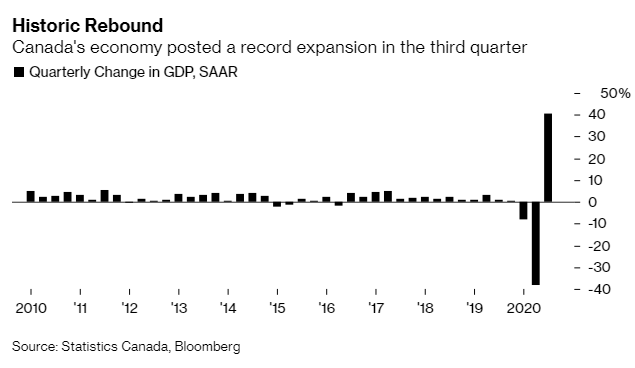 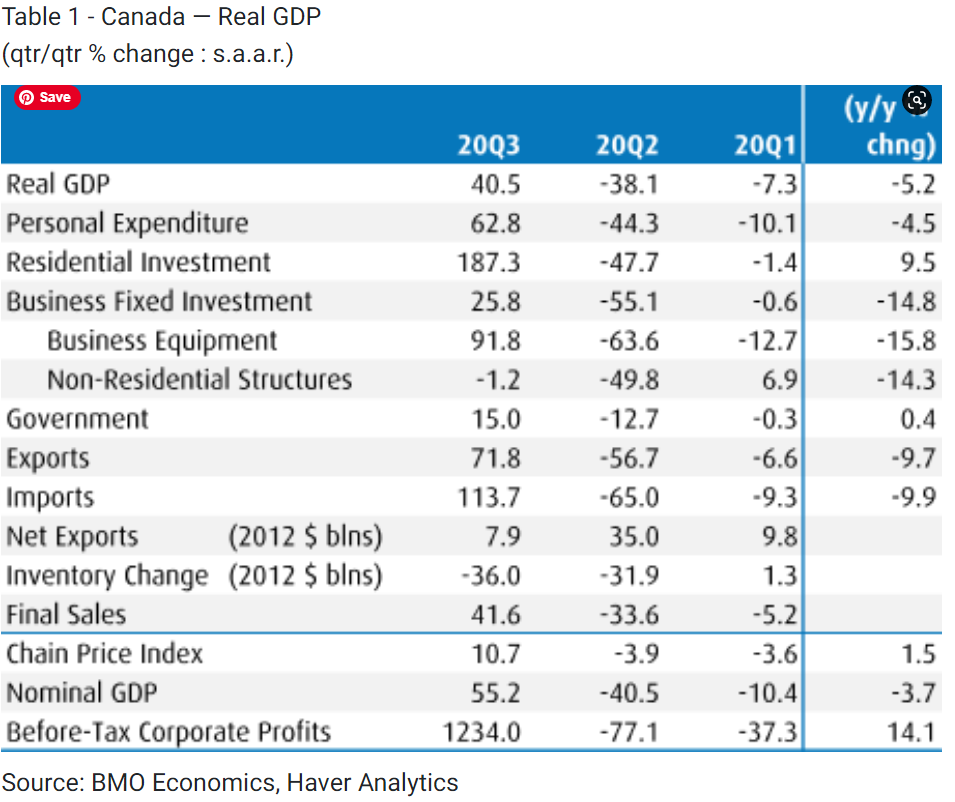 Consumption, which led to the contraction in the second quarter, rose 63% (annualized) as consumers rushed to spend after being shutout from most stores during the lockdown period. Shifts in spending patterns due to health concerns and ongoing restrictions on businesses most affected by the pandemic (i.e. restaurants, travel, tourism) resulted in consumers spending lavishly on durable goods (+263%). Non-durables also saw strong growth for the quarter (+19%). The level of durables and non-durables spending was 7.7% and 3.7%, respectively above pre-pandemic levels. On the other hand, with the pandemic weighing on demand for high-contact services, total spending on services was still well below pre-pandemic levels (-12.4%), despite growing quickly in the third quarter (44.3%).

There has been intense focus on household finances through the pandemic, and while the savings rate pulled back in Q3, it remained at very high levels at 14.6% (versus the record 27.5% in Q2). Compared with pre-virus trends, household savings have swelled at least $150 billion above where they may have expected to have been in more normal times (i.e., excess savings). While disposable incomes dropped last quarter, they were still up a towering 10.6% y/y, compared with a modest 3.8% rise in 2019.

On top of that, overall consumer spending is still down 3.7% y/y in nominal terms, as services spending remains heavily constrained by circumstances. That yawning gap between an income spike and constrained spending has lifted savings massively, reflecting the government programs to cushion the pandemic’s blow, including mortgage and other deferrals and income support programs.

Yesterday’s federal fiscal update confirmed that the government support would be enhanced, taking the federal budget deficit to over $381 billion this year. Canada has already provided the largest COVID-related fiscal stimulus among the industrialized nations. We started the period with the lowest government-debt-to-GDP ratio in the G7 at 31%, but it is expected to rise to over 50% next fiscal year.

Like consumption, business investment also rebounded sharply, growing 82.4% annualized in the third quarter. Machinery and equipment (+91.8%) and intellectual property products (+30.8%) contributed to the pick-up, while investment in non-residential structures continued to decline (-1.2%). The main factor, however, fueling the increase was residential investment (+187.3%). The housing market ran red-hot as pent-up demand, low interest rates, and pandemic-induced shift in preferences sent sales and prices to record-levels this summer.

The upturn in housing investment was led by ownership transfer costs (+109.5%, q/q) and, to a lesser extent, renovations (+17.7%, q/q). The increase in ownership transfer costs was widespread, as home resale activities resumed across the country, with sharp increases in resale units and prices. New construction increased 9.7% q/q, after a 7.6% q/q decline in the second quarter. The increases coincided with low mortgage rates, improved job market conditions, and higher employee compensation in the third quarter.

In terms of trade, exports and imports grew strongly (exports: 71.8%; imports: 113.7%). Given that imports grew faster than exports, net trade weighed on the GDP calculation for the quarter.

Canada’s labour market regained almost a third of the jobs lost during March and April in the third quarter, and as such, compensation of employees rebounded for the quarter (+35.5%). Government transfers through employment insurance benefits, which supported income through the second quarter, declined by 91.9% but remained historically elevated. On the whole, household disposable income declined by 12% in the third quarter. However, the savings rate remained at 14.6% as the rebound in consumption was offset by the bounce back in compensation and still-high government transfers. Finally, the gross operating surplus, a measure of corporate profits, improved by 59.3% for the quarter.

The Canadian economy will decline roughly 5.7% this year before rebounding 5.5% in 2021 (yesterday’s Fall Fiscal Statement was based on a 5.8% drop for 2020 and a 4.8% rise next year). The prior largest yearly decline was a drop of 3.2% in 1982, while the anticipated growth next year would be the best since 1984. And lest anyone doubt the ability of the economy to recover at that pace, consider: a) some of the growth rates seen in Q3, which could be a taste of what could lie ahead later in 2021; b) the added fiscal stimulus still on its way; and c) the degree of excess savings that households now have at their disposal to unleash in the coming year.