2020 Was a Blockbuster Year for Housing

Despite the fears leading into the pandemic last Spring, 2020 marked a record number of home resales as new listings lagged and prices climbed. December housing data released by the Canadian Real Estate Association (CREA) today shows national home sales surged 7.2% month-over-month (m-o-m) at a time of the year when housing is normally slow. The chart below shows that resales were impressively above their 10-year average. The seasonally adjusted activity was running at an annualized 714,516-unit pace in December 2020 – the first time on record that monthly sales (at seasonally adjusted annual rates) have ever topped the 700,000 mark.  It was a new record for December by a margin of more than 12,000 transactions. For the sixth straight month, sales activity was up in almost all Canadian housing markets compared to the same month in 2019.

The increase in national sales activity from November to December was driven by gains of more than 20% in the Greater Toronto Area (GTA) and Greater Vancouver.

On a year-over-year basis (y-o-y), activity rocketed upward by 47.2% as interest rates hit record lows, housing needs changed owing to the pandemic, and supply was insufficient to meet demand. The housing boom occurred despite the fall in population growth, reflecting the dearth of new immigration. The yearly change in population growth in Canada nosedived in 2020 after climbing powerfully in the prior four years. Despite this headwind, for 2020 as a whole, 551,392 homes traded hands over Canadian MLS® Systems – a new annual record. This is an increase of 12.6% from 2019 and stood 2.3% above the previous record set in 2016. 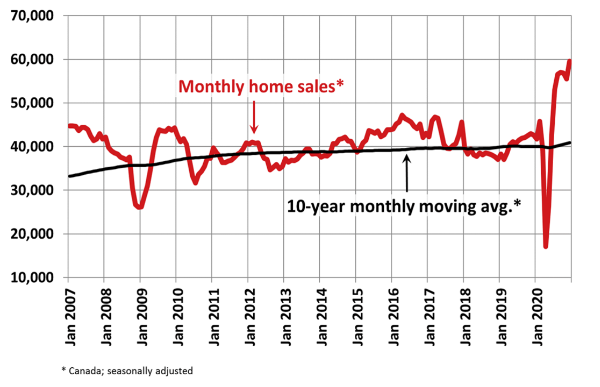 “The stat to watch in 2021 will be new listings, particularly in the spring – how many existing owners will put their homes up for sale?” said Shaun Cathcart, CREA’s Senior Economist. “We already have record-setting sales, but we know demand is much stronger than those numbers suggest because we see can see it impacting prices. On New Year’s Day, there were fewer than 100,000 residential listings on all Canadian MLS® Systems, the lowest ever based on records going back three decades. Compare that to five years ago, when there was a quarter of a million listings available for sale. So we have record-high demand and record-low supply to start the year. How that plays out in the sales and price data will depend on how many homes become available to buy in the months ahead. Ideally, we’d like for households to be able to find and acquire the homes that best suit their needs and for housing to remain affordable, but the fact is we’re facing a major supply problem in 2021.”

The number of newly listed homes climbed by 3.4% in December, led by more new listings in the GTA and B.C. Lower Mainland, the same parts of Canada that saw the biggest sales gains in December.

Based on a comparison of sales-to-new listings ratio with long-term averages, only about 30% of all local markets were in balanced market territory in December, measured as being within one standard deviation of their long-term average. The other 70% of markets were above long-term norms, in many cases well above.

The Aggregate Composite MLS® Home Price Index (MLS® HPI) rose by 1.5% m-o-m in December 2020. Of the 40 markets now tracked by the index, only one was down between November and December.

The non-seasonally adjusted Aggregate Composite MLS® HPI was up 13% on a y-o-y basis in December – the biggest gain since June 2017 (see chart below). 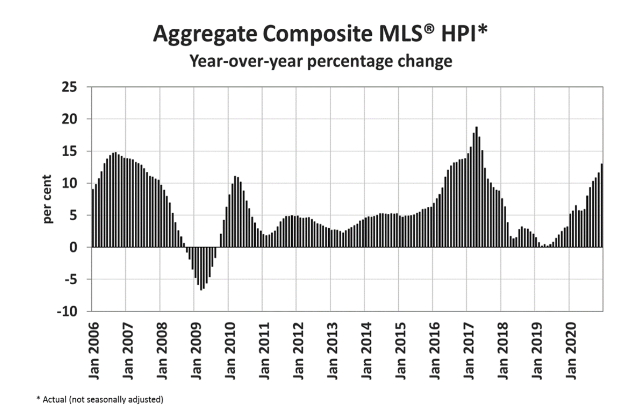 Home price activity largely reflected the desire of home purchasers to move away from city centres to a greener, less-expensive suburbs and exurbs now that telecommuting appears to be a sustainable option, at least part-time.

The largest y-o-y gains – above 30% – were recorded in Quinte & District, Simcoe & District, Woodstock-Ingersoll and the Lakelands region of the Ontario cottage country (see the table below for details).

Prices were up in the 15-20% range compared to last December in Oakville-Milton, Peterborough and the Kawarthas, Montreal and Greater Moncton.

Meanwhile, y-o-y price gains were in the 10-15% range in the GTA and Mississauga, Quebec City, and the 5-10% range across B.C., and in Regina, Saskatoon, Winnipeg and St. John’s NL.

Alberta still lagged owing to the still-negative oil market scene, where home prices were up only 1.5% and 2.7% in Calgary and Edmonton, respectively.

The MLS® HPI provides the best way to gauge price trends because averages are strongly distorted by changes in sales activity mix from one month to the next. 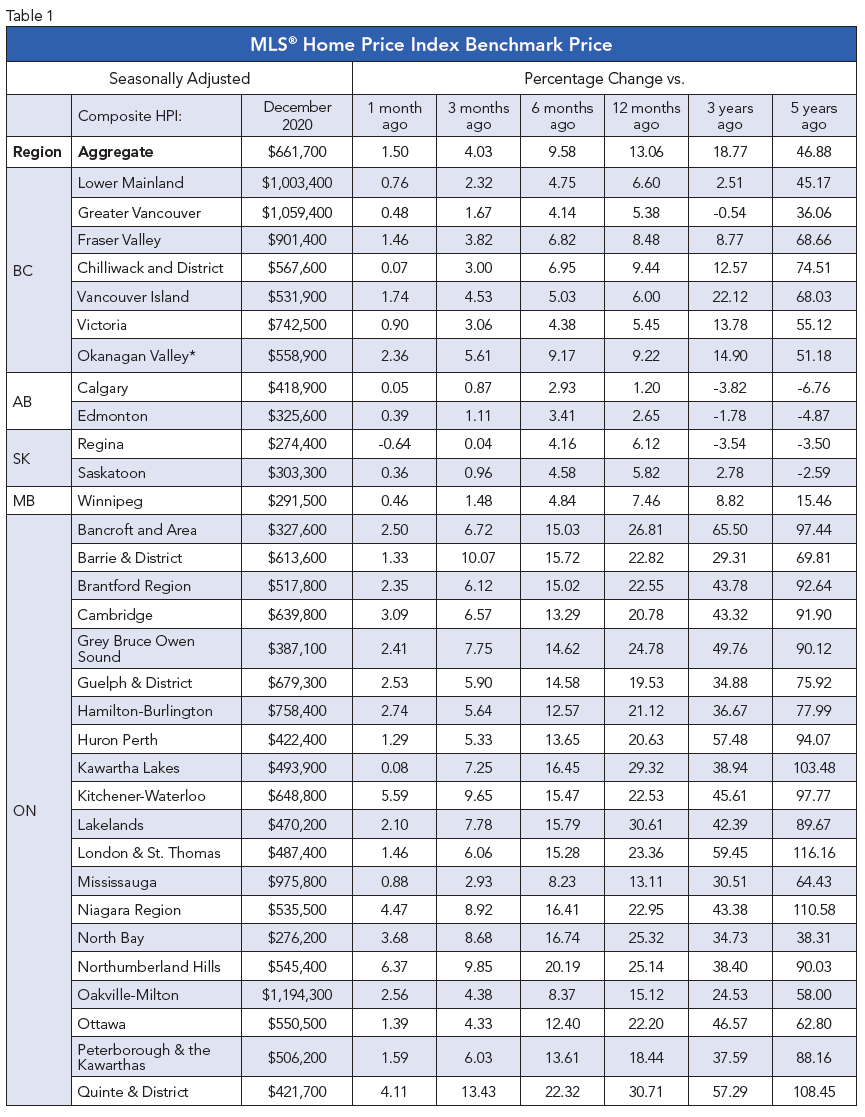 Housing strength is largely attributable to record-low mortgage rates and strong demand for more spacious accommodation by households that have maintained their income level during the pandemic. The hardest-hit households are low-wage earners in the accommodation, food services, non-essential retail and tourism-related sectors. These are the folks that can least afford it and typically are not homeowners.

We end 2020 with the national average home price up 17.1%–a dramatic surge rather than the 9-18% decline forecast by CMHC last March. Moreover, 2021 is likely to be another strong year for housing.  It would not surprise me if annual sales reached a new high in 2021, especially in the first half of the year. There will, however, be cooling signs as the year progresses and especially into 2022. Firstly, supply constraints are a major factor as new listings remain low relative to demand. As well, the pandemic-induced changes in housing needs will have a waning effect over time. As vaccine injections rise across the country and we return to a new normal, interest rates will creep up moderately. This along with higher home prices will slow the pace of activity as affordability erodes.

There will be mitigating factors in 2022: the number of new immigrants is slated to rise to roughly 500,000 that year and demand for short-term Airbnb rentals will rise sharply as tourism revives.