The August Labour Force Survey, released this morning by Statistics Canada, reflects labour market conditions as of the week of August 9 to 15, five months after the onset of the COVID-19 economic shutdown. By mid-August, public health restrictions had substantially eased across the country and more businesses and workplaces had re-opened.

Employment rebounded in August by 246,000 net new jobs, a slowdown from the 419,000 gain in July and June’s 953,000 rise. This slowdown was expected with the initial recovery boost from easing containment measures in the spring fading through the summer.

The August job growth brought employment to within 1.1 million of its pre-COVID February level, thereby recouping two-thirds of all the lost jobs.

The number of Canadians who were employed but worked less than half their usual hours for reasons likely related to COVID-19 fell by 259,000 (-14.6%) in August. Combined with declines in May, June and July, this left COVID-related absences from work at 713,000 (+88.3%) above February levels.

As of the week of August 9 to 15, the total number of Canadian workers affected by the COVID-19 economic shutdown stood at 1.8 million. In April, this number reached a peak of 5.5 million, including a 3.0 million drop in employment and a 2.5 million increase in COVID-related absences from work.

The number of Canadians working from home declined for the fourth consecutive month. In April, at the height of the COVID-19 economic shutdown, 3.4 million Canadians who worked their usual hours had adjusted to public health restrictions by beginning to work from home. This number has fallen each month since May when the gradual easing of public health restrictions began and reached 2.5 million in August.

Among Canadians who worked their usual hours in August, the total number working from home fell by nearly 300,000 compared with July, while the number working at locations other than home increased by almost 400,000. 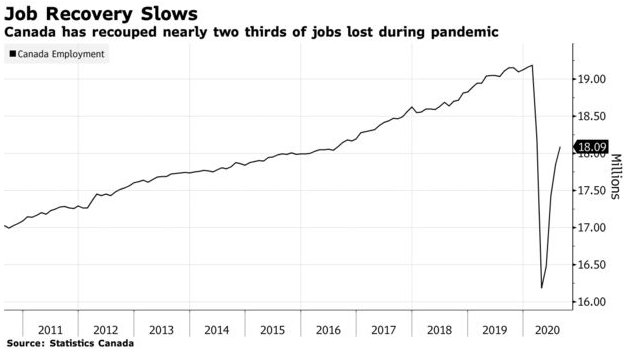 The Jobless Rate Continued to Fall in August

Accommodation and food services as well as retail trade were among the industries hardest hit by the initial COVID-19 economic shutdown. By April, employment had fallen to half (-50.0%) of its pre-pandemic level in accommodation and food services and to 77.1% of its pre-COVID-19 level in retail trade. Starting in May, employment rebounded in both sectors as many provinces began reopening their economy.

Employment growth in accommodation and food services rose by 18.4% per month on average from May to July. In August, however, the pace of growth in the industry slowed to 5.3% (+49,000). Despite these recent gains, employment in accommodation and food services was at 78.9% of its February level. August marked the fifth full month of international travel restrictions, which continues to affect industries with strong ties to tourism.

The number of people employed in retail trade edged up 0.7% (+14,000) in August, following average monthly increases of 6.3% over the previous three months. Employment in retail trade reached 93.4% of its pre-COVID-19 level but fell just below the rate of recovery for total employment (94.3%).

While employment remained below pre-COVID-19 levels, retail sales in June were higher than in February and are expected to continue to rise in July, based on preliminary estimates. This highlights potential structural changes within the industry as employers have been able to increase their sales despite a smaller workforce.

Employment rose in most Western provinces in August. British Columbia reported the largest increase, up 15,000 (+0.6%). Employment reached 94.1% of its February level and the unemployment rate fell 0.4 percentage points to 10.7%.

While employment in Alberta was little changed, the unemployment rate declined by a full percentage point to 11.8% as fewer people looked for work.

In Atlantic Canada, Nova Scotia had the largest employment gain in August, up 7,200 (+1.6%), mostly in part-time work. The unemployment rate was little changed at 10.3%, as more Nova Scotians participated in the labour market. After notable increases in May and June, employment in New Brunswick held steady for the second consecutive month. 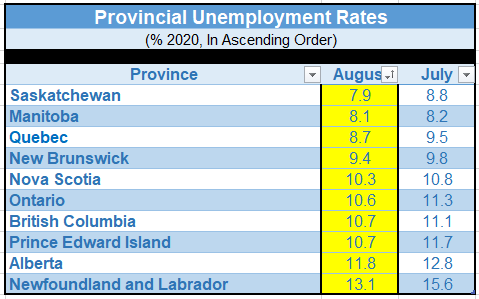 This was still a relatively strong employment report even though job gains have slowed. Canada’s employment recovery has outpaced the US, recouping two-thirds of the lost jobs compared to only a 50% gain south of the border. The hardest-hit has been both low-wage workers and youth, which helps to explain why housing activity has been so strong. Low-wage employees and youth are typically not homebuyers or sellers. Moreover, consumer spending in Canada has solidified very near to pre-COVID levels. Spending on entertainment, dining and self-care has risen recently as more businesses open up and is now approaching year-ago levels. Total credit or debit card spending is up about 5% relative to the same time last year. Canadians are venturing out more around their home towns, but not going much further.

Recent data from the local real estate boards in Toronto and Vancouver showed strong sales activity and significant further upward pressure on prices. The CREA data for the whole country will be out on the 15th of September. This adjusts the price data for types of homes sold, giving us a better idea of how significant price pressures have been.