Trudeau Opens the Spigots for Social Spending, Income Support, and a Green Economy

n more than two years, the first federal budget extends Ottawa’s COVID-19 “lifeline” for workers and struggling businesses another few months as it aims to pull Canada through the pandemic once and for all. Clocking in at a bulky 724 pages, this is a highly detailed budget that sets the stage for post-pandemic policy in Canada.

Finance Minister Chrystia Freeland’s first crack at a budget plan is also widely viewed as a pre-election platform with more than $100 billion in new spending over the next three years targeting a wide variety of voters, from seniors and their caregivers to parents and business owners.

The government will need to get at least one opposition party to support it to avoid a pandemic election this spring. Much of the redistributive ‘investments’ and social spending is right up the NDP’s alley, so that should be no problem.

Canada’s net debt is now over $1 trillion for the first time, after a $354 billion deficit for the pandemic year just over. It is expected to keep climbing with deficits of $155 billion this year and $60 billion in 2022-23.

That is driven in part by more than $100 billion in new spending over the next three years, including costs to maintain federal wage and rent subsidies and aid for laid-off workers, until September now, instead of cutting them off in June.

Freeland is also looking ahead to the post-pandemic Canada the Liberals want to see, one with $10-a-day childcare, the ability to produce its own vaccines, national long-term care standards and small- and medium-sized businesses equipped with the workers and technology they need to survive.

It also includes a greener, cleaner Canada, with a promise of more than $17 billion in climate change programs, much of it in the form of incentives to encourage heavy industry to curb their emissions and grow Canada’s clean technology sector.

All of it comes with a pandemic-sized asterisk that things could still change drastically if vaccine supplies are delayed, or they prove not to work that well against emerging variants of the virus. The budget includes alternative scenarios that show where the fiscal picture might go if the worst-case scenarios of the pandemic play out.

Those risks seem even more real as the country is battling the worst wave of the pandemic yet with record hospitalizations and patients in critical care and doctors and nurses repeatedly warning of a health care system on the brink of collapse. 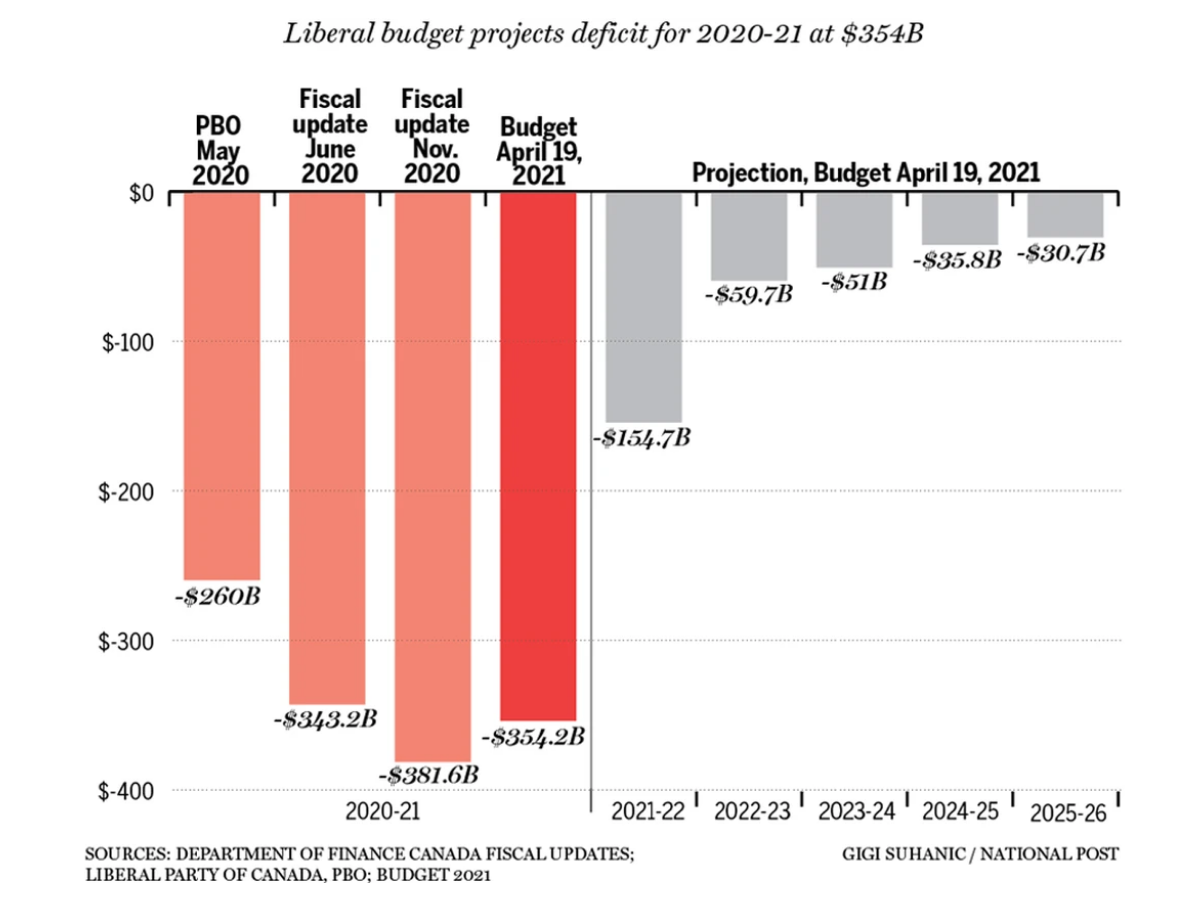 The Budget aims to create 500,000 training and work opportunities. It pledges $2.4 billion over three years to develop skills and trades, with about 40 percent earmarked for training in sectors ranging from health care to construction.

It adds on $8.9 billion more to beef up the Canada Workers Benefit in a boost to low-wage workers, who will have a higher income threshold at which their benefit starts to shrink.

Other measures include bumping the federal minimum wage to $15, pledging $300 million to programs for Black and women entrepreneurs and other underrepresented groups, and recommitting to protect gig workers through promised amendments to the Canada Labour Code.

About 300,000 Canadians who had a job before the pandemic are still out of work.

Help for Small Businesses, Tourism Industry and the Arts

The government announced extending the Canada Emergency Rent Subsidy (CERS) and Canada Emergency Wage Subsidy (CEWS) past their current June 5 deadline but added it is planning to wind them down gradually by the end of September. The government also announced a new hiring credit and some aid programs for the hard-hit tourism and arts industries. Firms that collect the CEWS will face a clawback of the aid if their executives earn more in 2021 than they did before the pandemic. A step critics said should have been taken when the subsidy first came into force in mid-2020.

The hard-hit tourism sector is also getting $500 million for a Tourism Relief Fund, to be administered by regional development agencies to help local tourism businesses recover from the COVID recession. Another $100 million is going to a marketing campaign that will encourage Canadians to visit vacation spots in this country. Never mind that they are fully booked for the rest of the year.

The budget also unveiled $200 million in spending to support major arts and cultural festivals, which will flow through regional development agencies.

The government’s budget estimates its spending plan will create or maintain some 330,000 jobs next year and add about two percentage points to economic growth, part of a three-year boost from $101.4 billion in new spending over that time.

The largest contributor is almost $30 billion over five years to drive down fees in licensed daycares to reach $10 a day by 2026. That money is on top of already planned child-care spending. However, the problem is that it will take provincial buy-in as it requires a 50/50 split of the expenses. This could cause untold delays.

There is also more money for broadband infrastructure and $7 billion in cash, financing and advice to help companies adopt and invest in new technologies intended to address ongoing concerns about the country’s productivity gap. 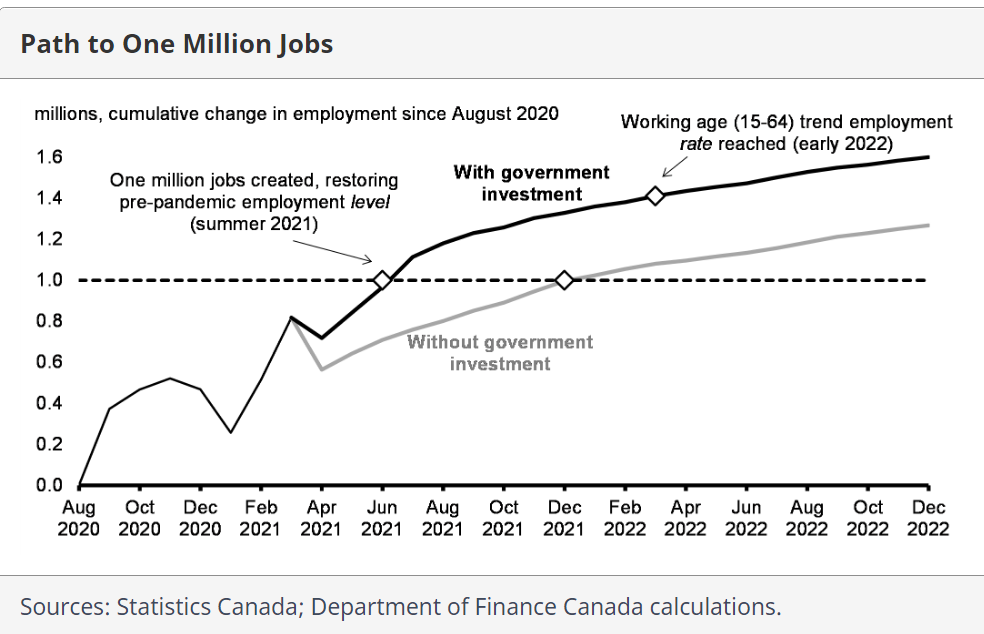 Ottawa is trying to jump-start the jobs recovery with a new program that offsets a portion of employers’ labour costs. The Canada Recovery Hiring Program (CRHP) would run from June 6 to November 20 and cover as much as 50 percent of incremental pay to workers, whether through higher wages, more hours or new hires. The program is estimated to cost $595-million.

The labour market has mostly recovered from the pandemic. The number of employed Canadians is down by roughly 300,000, or 1.5 percent, from pre-pandemic levels. At this point, the damage is mostly confined to a handful of sectors – such as hospitality – that are curtailed by public-health measures. At the same time, employment has increased in many white-collar industries.

Much like past budgets, the federal government has proposed a series of measures on housing, although they are unlikely to curb the robust activity and speculation of the past year.

Canada will impose a 1% tax on the value of real estate held by foreigners if the property is left vacant, beginning in 2022. It follows foreign buyers’ taxes in British Columbia and Ontario. The move is estimated to bring in $700-million in revenue over four years, starting in 2022-23.

The budget also proposes to send an extra $2.5-billion to the CMHC for various initiatives, including the construction of affordable housing units and plans to reallocate $1.3-billion for such things as the conversion of vacant offices into housing.

However, the budget was just as notable for what wasn’t there: new measures aimed directly at cooling the real estate market.

If all goes well, and the pandemic is largely behind us by September, the government forecasts a marked drop in deficits and debt over the five-year planning horizon.

There is no plan to balance the budget, but one area of focus ahead of the budget was whether Ottawa would commit to a specific fiscal anchor. And while a precise figure was not mentioned, the budget states: “The government is committed to unwinding COVID-related deficits and reducing the federal debt as a share of the economy over the medium-term.” With the proviso that the economy recovers roughly in line with consensus expectations and that borrowing costs don’t flare dramatically higher, this suggests that the anchor is a 50% debt/GDP ratio. For the deficit, this implies a reversion to pre-pandemic levels of around 1% of GDP (or about $30 billion later in the decade). In a sense, then, the pandemic has been “paid for” by a one-time level step-up in the debt/GDP ratio from 30% to 50%.