Canadian Inflation Surged to 7.7% In May

Canada’s consumer price index increased 7.7% in May from a year earlier, up from 6.8% in April, the fastest inflation pace since January 1983. The release confirms that the Bank of Canada is staring down the most dangerous burst of Inflation since it started targeting the consumer price index in the early 1990s.

Excluding gasoline, the CPI rose 6.3% year over year in May, after a 5.8% increase in April. Price pressures continued to be broad-based, pinching the pocketbooks of Canadians and, in some cases affecting their ability to meet day-to-day expenses.

The acceleration in May was mainly due to higher gasoline prices, which rose 12.0% compared with April 2022 (-0.7%). Higher service prices, such as hotels and restaurants, also contributed to the increase. Food prices and shelter costs remained elevated in May as price growth was unchanged year-over-year.

Monthly, the CPI rose 1.4% in May, following a 0.6% increase in April. On a seasonally adjusted monthly basis, the CPI was up 1.1%, the fastest pace since the introduction of the series in 1992.

Wage data from the Labour Force Survey found that average hourly wages rose 3.9% year over year in May, meaning that, on average, prices rose faster than wages in the previous 12 months.

Energy prices rose 34.8% on a year-over-year basis in May, driven primarily by the most significant one-month price increase since January 2003. Compared with May 2021, consumers paid 48.0% more for gasoline in May, stemming from high crude oil prices, which also resulted in higher fuel prices (+95.1%).

Crude oil prices rose in May due to supply uncertainty amid Russia’s invasion of Ukraine, as well as higher demand as travel continued to grow in response to eased COVID-19 restrictions.

Grocery prices remained elevated in May as prices for food purchased from stores rose 9.7%, matching the gain in April. With price increases across nearly all food products, Canadians reported food as the area in which they were most affected by rising prices. Supply chain disruptions and higher transportation and input costs continued to put upward pressure on prices.

In May, shelter costs rose 7.4% year over year, matching the increase in April. Year over year, homeowners’ replacement costs rose to a lesser extent in May (+11.1%) compared with April (+13.0%), as prices for new homes showed signs of cooling.

Although prices for mortgage interest costs continued to decrease on a year-over-year basis, prices fell less in May (-2.7%) compared with April (-4.4%), putting upward pressure on the headline CPI. 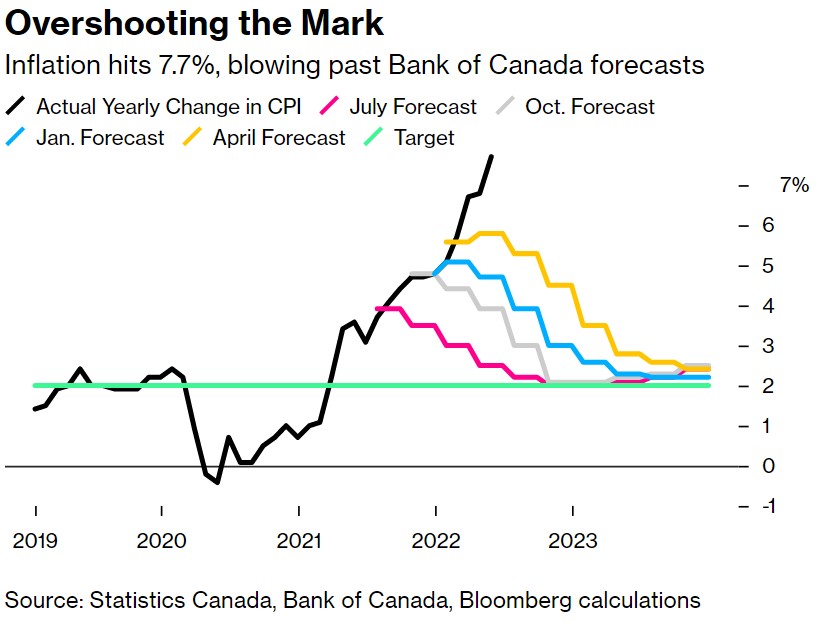 All central banks worldwide (except Japan) face much more than expected inflation. Today’s 7.7% inflation report for May increases the urgency for the Bank of Canada to quickly withdraw stimulus from an overheating economy for fear of price pressures becoming entrenched in inflation expectations and the economy. Tapping on the brakes isn’t good enough. The Bank must expedite the return to a neutral level of interest rates, which likely means the top of the neutral range at 3% for the overnight rate. It currently stands at only 1.5%.

We expect a 75 basis point hike on July 13, bringing the policy rate up to 2.25%. Markets are currently predicting that rate to go to 3.5% by yearend. That might well be too high, but right now, the Bank needs to prove its inflation-fighting credibility, even if it drives the economy into recession. It will continue to slow the housing market, reversing some of the 50% increase in national home prices over the past three years.

According to Bloomberg News, Senior Deputy Governor Carolyn Rogers was asked today about the possibility of a ‘super-sized’ move. She said, “We’ve been clear all along the economy is in excess demand, inflation is too high, rates need to go up. We’ll get it there.” Suggesting the possibility of an even larger than 75 bp rate hike.

The 7.7% annual reading may not even represent the peak, given that gasoline prices have picked up further in June.

The full range of core inflation measures surged in May, suggesting that price pressures go well beyond food and energy. The chart above shows that the Bank of Canada has consistently underestimated inflation. So have other central banks. They are bringing out the big guns now, and the housing market will always take the biggest hit.